I cannot always pretend to understand this new age of television, with its surfeit of TV series from websites and tiny channels and online bookstores. But I am enjoying it.

Take Manhattan, the richly textured period drama about scientists trying to create the atomic bomb, in Los Alamos, N.M., during World War II. It comes from WGN America, the cable-broadcast “superstation” that’s trying to rebrand itself with original scripted dramas. (The first, the loopy supernatural serial Salem, debuted earlier this year.) It’s created little pop-culture buzz. (It’s apparently being recapped only at a few sites, chief among them Scientific American and Popular Mechanics.) It’s drawing live ratings well under a million, with its 18-49 advertising-demo audience practically a rounding error.

Yet it was recently picked up for a second season. How does this work? Is it a loss leader? Has WGN figured out, like the architects of nuclear fission, how to extract tremendous power from a tiny mass of viewers? I have no idea. But its season finale, “Perestroika,” left me very happy that somehow it’s working.

Manhattan began as one of those shows that seemed just good enough–one of the growing mass of competent cable series that I might watch regularly if I had 72 hours in a day. I would fall behind and catch up, but as it went on, it grew into something special. Like Masters of Sex, it used a fictionalized version of history to tell human stories at the same time, while dramatizing the excitement of scientific discovery.

Through the families of the scientists brought to the middle of nowhere for who-knows-what, it asked, what are the unintended costs of a culture of secrecy? Through the internecine competition of the bomb-race, it asked, where’s the line between necessary ambition and self-aggrandizement? And through the politics and paranoia of the project, it asks, how much individual sacrifice is acceptable in the name of a greater good?

“Perestroika” brought those themes to crisis while setting up the series strongly for a second season–in particular, through Frank Winter’s decision about whether to let Charlie twist in the wind, accused of espionage, rather than spill about the breach of compartmentalization. With the Thin Man project now over–and Reed fatally out of the way–his implosion program is the only game in town. He’s won, and all he needs to do to keep winning is to cut Charlie loose, one more unfortunate case of collateral damage, like Sid Liao.

Why he doesn’t, but rather arranges to be “caught” telling Liza what they’re really doing out in the desert, is an intriguing question. It may simply be human guilt. But there may be a larger recognition that once you accept the win-at-all-costs mentality and let it go unchallenged, there’s no telling whom it will claim. It’s understandable that people like Frank would develop a Messiah complex; after all, they’re being treated like messiahs, with the individual power to stop the slaughter of millions and save the free world. As Babbit (an excellent Daniel Stern) tells Frank, “It doesn’t matter that you’re a good man. Maybe a good man couldn’t have made implosion work.”

But their power is also terrifying to those who rely on them. Having to place so much faith in these inscrutable eggheads creates suspicion and resentment in the powerful, from the menacing Occam to the Secretary of War (Gerald McRaney), who bellows at Oppenheimer for selling the President “a Buck Rogers fantasy.” (In real life, after all, Oppenheimer was dogged by red-baiting accusations.) The godlike power of these physicists makes them invaluable and suspect at the same time. It may be that the prospect of unleashing such a tremendous power had led Frank to realize that win-at-all-costs is not longer a sustainable doctrine. Maybe we do still need good men.

Manhattan‘s first season hasn’t been flawless; its themes and exposition can be clumsy, and the production seems a little threadbare. But it’s been a fascinating twist on the disparate-soldiers-thrown-together-in-a-foxhole war story, following people whose wisdom doesn’t always match their intelligence. Even Frank, in his revelation to Liza, suggests a kind of sad-in-retrospect naivete, predicts that thanks to their work, “There will never be another war.” If there’s one thing Manhattan‘s first season showed us, people will always find reason to fight–even when they’re on the same side. 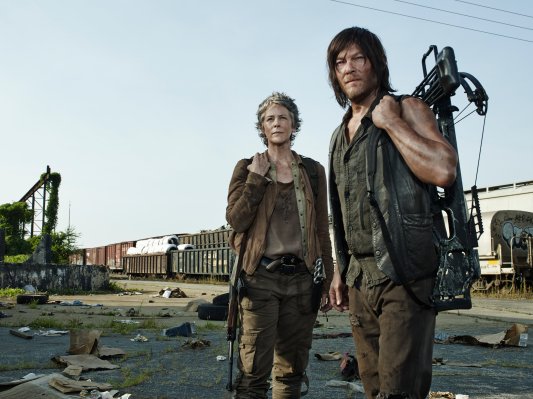 The Walking Dead Watch: 'Strangers'
Next Up: Editor's Pick