Many quarterbacks have come before. Few, if any, have been better.

Peyton Manning added another record to his collection Sunday night, tossing his 509th career touchdown pass to break Brett Favre’s all-time mark. The historic pass, his third TD of the night, landed in the arms of Demaryius Thomas, who managed to drag his feet near the sideline. Tight end Julius Thomas had a shot to help Manning cement the record two plays earlier, but he was unable to corral Manning’s pass.

A smiling Manning celebrated his latest accomplishment for but a brief moment, hugging head coach John Fox and several teammates as the crowd at Mile High Stadium saluted him with a standing ovation.

Earlier in the game against the San Francisco 49ers, Manning found Emmanuel Sanders for touchdown No. 507. He then tied Favre’s record with a 39-yard scoring pass to Wes Welker. A little of the drama was sapped from the Manning-to-Welker connection because the official nearest the play ruled that Welker had stepped out prior to getting the ball to the pylon. That call was overruled by a second official and stood after a review.

The record-holder before Favre came along was Dan Marino, who finished his career with 420 passing touchdowns. Manning leapfrogged that mark back in 2012, during his first season with the Broncos, leaving only Favre ahead of him.

He has broken record upon record since then (with a Super Bowl victory to boot), so many in fact that Manning and his teammates swore they had tuned out the noise coinciding with this latest chase.

“What I’ve concentrated on is trying to do whatever it takes to win,” Manning said earlier in the week. “I don’t feel like it’s been a distraction because we’ve handled it and focused on what’s important.”

Among the most prestigious records still in sight for Manning: Favre’s career passing yardage mark of 71,838. Manning entered Sunday’s game 5,344 yards back of that total. Should he finish out this season with good health and return for the 2015 campaign, it’s a virtual certainty that Manning catches Favre there, too.

Favre claimed on NFL GameDay Morning Sunday that he was not paying much attention to Manning’s touchdown total.

“I don’t really care to be honest with you and I mean that with no disrespect,” said Favre, in an interview with the NFL Network’s Steve Mariucci. “I think the world of Peyton. I’m not surprised that he’s going to break it.

As for the NFL’s recent tilt toward offensive prowess, Favre said, “Well, it is a little more prolific today, but I don’t want to take anything away from what he’s done. Drew [Brees], I think, if he continues to play, we know he’ll be prolific. He could put up astronomical numbers as well. But it’s becoming a different era.”

Three years ago, it appeared that Manning’s days of rewriting the record books might be over. He, of course, missed all of the 2011 season with a neck injury. Indianapolis then cut the future Hall of Famer after that season and replaced him with 2012 No. 1 draft pick Andrew Luck.

Manning signed with Denver and proceeded to put up 37 touchdown passes in 2012 and an NFL record 55 last season.

All told, Manning holds upward of 40 individual NFL passing records. He added another to his collection Sunday night. 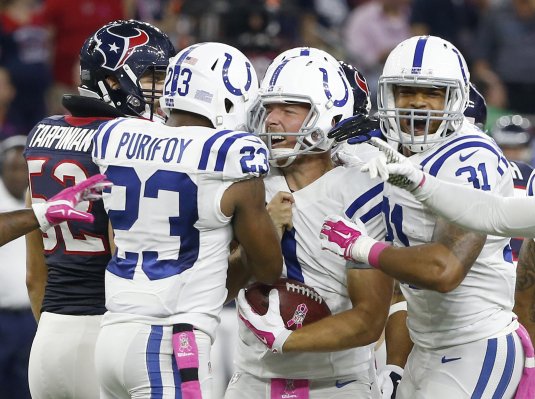 Watch an NFL Punter Recover His Own Onside Kick
Next Up: Editor's Pick