The body of a victim is moved from an ambulance to the morgue after it was brought back from Annapurna Region in Kathmandu October 17, 2014.
Navesh Chitrakar—Reuters
By Rishi Iyengar

Nepalese authorities are being thwarted in their hunt for more survivors of the Himalayan snowstorms that have killed at least 40 people over the past week.

After minor avalanches hampered the search for stranded climbers Monday, Keshav Pandey, of the Trekking Agencies’ Association of Nepal, admitted, “After this we can only hope that those who are missing will establish contact with us or their families,” Reuters reports.

Some 600 people have been rescued so far by the Nepalese army and other groups. Pandey believes it unlikely any more tourists are missing but said that some local porters and guides had not yet been traced.

Casualties from the blizzards, which took place unexpectedly during peak trekking season and are said to have been triggered by a cyclone that hit eastern India the previous week, included trekkers from Israel, Japan, Canada, Poland and Slovakia along with several locals.

Baburam Bhandari, chief of Nepal’s Mustang district on the Annapurna mountain circuit where the blizzards hit, told Reuters that army rescuers dug out the body of another Israeli tourist on Monday.

This is the second major disaster this year in Nepal, which is home to eight of the world’s 10 highest mountains. (Annapurna ranks in 10th place.) Sixteen local guides lost their lives this April in an avalanche on the world’s tallest peak, Mount Everest.

Nepalese Tourism Minister Dipak Amatya said he would do everything possible to ensure that the country never again encountered a tragedy of this nature. “There is no point blaming the hostile weather for the disaster,” Amatya said. 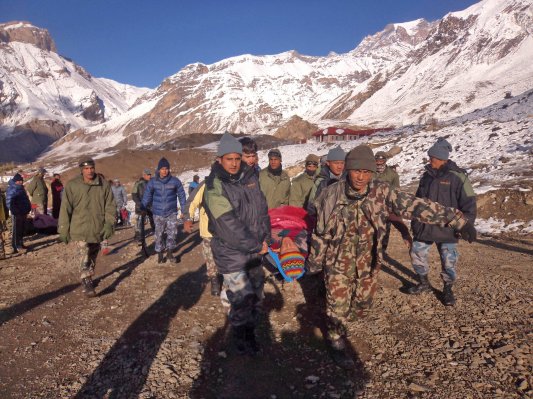 Himalayan blizzards kill at least 20
Next Up: Editor's Pick