Ice Spotted on Mercury—Yes, We Know It Sounds Nuts

At high noon on Mercury, the temperature can soar to 800°F—and no wonder. The Solar System’s smallest planet (as of 2006, anyway) averages only 36 million miles from the Sun, which is right next door compared with Earth’s 93 million. You’d be justified in thinking that ice couldn’t possibly exist on such a scorching world.

But you’d be wrong. Scientists using the MESSENGER space probe are reporting in the journal Geology that they’ve taken images of that reveal what they call “the morphology of frozen volatiles” in permanently shadowed crater floors near the planet’s north pole. That’s ice, in plain English. “This is making a lot of people happy,” said Nancy Chabot of the Applied Physics Laboratory at Johns Hopkins, lead author of the report.

It’s good news because the discovery confirms circumstantial evidence for ice on Mercury that’s been mounting for decades—first from radar observations with powerful radio telescopes on Earth that showed high reflectivity from the polar region, then from MESSENGER’s neutron spectrometer, which picked up the atomic signal of hydrogen in the same area. That pointed to H2O, almost certainly in the form if ice, especially since the high precision topographic maps made by MESSENGER have shown planetary scientists just how deeply shadowed, and thus how perpetually frigid, some of the craters really are.

All of that made a strong case for ice, and the fact that the same thing occurs on the Moon is further confirmation that it’s possible

These are the first optical images, and nobody is entirely sure how the ice got there. One idea is that it was released from water-bearing rock in Mercury’s crust. But the leading theory suggests it arrived instead in the form of impacts from icy comets, which may well be the same way Earth got its oceans. “It’s a fair amount of ice,” Chabot said, “about equivalent to the water in Lake Ontario, so if it was one comet, it was a pretty sizable one.” More likely, she said, it would have been a series of smaller comets, falling over billions of years.

Either way, the comets would have disintegrated on impact, and while some of the resulting water vapor would have escaped into space, some would have found itself at the poles, where chilly temperatures in the craters’ shadows would have allowed it to freeze out and drop to the crater floors.

Another hint that comets may have been the source of Mercury’s ice: Some of the frozen stuff is partially covered with unusually dark material, which could be organic compounds, also found on comets in abundance. The dark, ice-concealing patches have sharp edges, suggesting that whatever created them happened relatively recently, just hundreds of millions of years ago at most. That supports the idea that comet impacts could be happening all the time (in the geologic sense, anyway).

Excited as the scientists are to see the presence of ice on Mercury confirmed, they’re even more excited by the prospect of what’s to come. Messenger’s orbit is bringing the probe to within about 120 miles above the planet’s surface on its closest approach, which is why it’s able to take such high-resolution images.

By next spring, however, the probe will be zipping just 12 miles above the surface, before the mission ends with a planned crash. At that distance, no one knows what surprises MESSENGER’s cameras are going to reveal. “It’s going to be interesting, to say the least,” Chabot said. 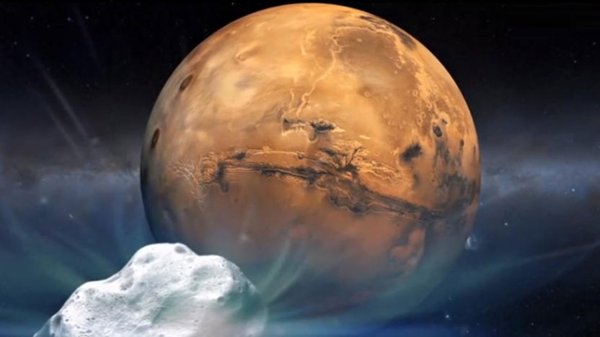 Watch a Comet Fly by Mars
Next Up: Editor's Pick