A Chinese plane on Monday spotted white, square-shaped objects in an area of the Indian Ocean where investigators have been looking for debris from the Malaysia Airlines flight missing for more than two weeks.

The state news agency Xinhua said a search plane passed over the objects in the southern Indian Ocean, about 1,224 miles southwest of Perth, where satellite imagery has led the international hunt to focus its efforts in recent days. Poor conditions reportedly meant photographs of the objects weren’t possible, but they were called “suspicious,” raising hopes yet again in a search that has seen numerous clues lead to dead ends.

“At present, we cannot yet confirm that the floating objects are connected with the missing plane,” Chinese Foreign Ministry spokesman Hong Lei cautioned a news briefing in Beijing.

The coordinates were sent to the Australian command center, which is coordinating the latest phase of the multinational search, as well as to the Chinese icebreaker Snow Dragon, which is due to arrive in the vicinity on Tuesday. The sighting is just the latest unconfirmed report to emerge from the area in the last few days. Possible wreckage, measuring 22 meters (74 ft) by 13 meters (43 ft), was initially sighted on satellite imagery on March 20 but has still not been tracked down.

“Pallets” with straps of different lengths were also spotted on Saturday and could possibly be cargo from the missing plane. However, they still have not been located and may have fallen off a shipping vessel, experts said. On Monday, Malaysian officials confirmed that the flight had carried such cargo but emphasized there was no hard evidence to connect the latest sightings.

Australian Transport Minister Warren Truss described Sunday’s search for Flight 370, which disappeared on March 8 en route from Kuala Lumpur to Beijing with 239 people on board, as “fruitless.” Operations were hampered by inclement weather. Search planes must fly for four hours from Perth, western Australia, to reach the area, and only have two hours there before having to return due to low fuel.

French satellite data pointed to certain objects on Saturday that may have been connected to the missing Boeing 777, but 575 miles north of previous sightings by Australia and China.

The U.S. is preparing to move a specialized device for locating black boxes in deep water into the region. The transponder on the 200-ton, twin-engine airliner’s flight recorder only has some two weeks of battery left, and is typically only audible in about 6,000 ft of water. But the highly sensitive listening capability of the Towed Pinger Locator can potentially hear down to a depth of 20,000 feet. The ocean floor in that area is thought to be some 9,000 ft deep, and sonar technology is hampered by a mid-ocean ridge.

Despite the ramping up of search operations in the southern corridor, experts emphasize that all options should remain open until definitive proof is found. “If you have evidence of debris in a certain area then the entire herd goes in that direction, which would not be ideal as if it turns out to be false then you have wasted all that time and resources,” sayid Michael Daniel, an International Aviation Safety consultant who spent over three decades at the Federal Aviation Administration.

James Middleton, professor of aviation at the University of New South Wales in Sydney, warned against underestimating the amount of debris floating in the southern Indian Ocean. “It’s a very rough part of the world and ships get into big storms and get damaged,” he told TIME. “And some disappear.”

Middleton also said he doubts whether the plane would have traveled as far as the southern Indian Ocean if there were a fire or catastrophic failure, and doesn’t think it’s a logical destination for a hijacking. “I cannot think of one reason why someone would take an airplane there, and I can’t think of a circumstance where it would be taken there accidentally,” he said.

Meanwhile, a transcript published in U.K. media that purported to be the last 54 minutes of communication by pilot Fariq Abdul Hamid, 27, from the cockpit of was dismissed as “invalid and inaccurate” by Department of Civil Aviation Director-General Datuk Azharuddin Abdul Rahman, according the New Straits Times. Also, according to police sources speaking to Fairfax Media, nothing of value has been recovered from the home flight simulator of Captain Zaharie Ahmad Shah. Malaysian officials revealed Monday that more than 100 people had been interviewed by police including the families of both the pilot and co-pilot. 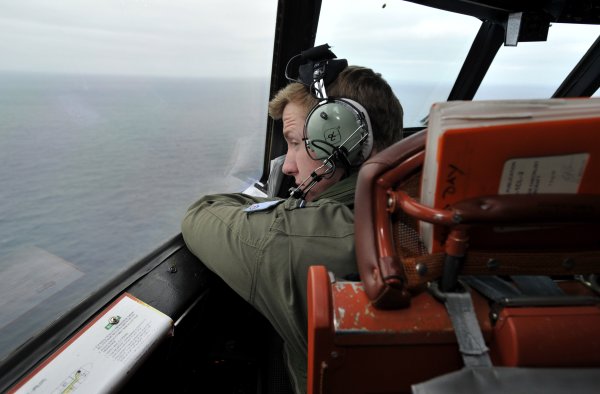