Why Apple Pay May Be the Company's Most Challenging Move Yet

Our smartphones have already become our de facto camera, music player, navigational device and personal assistant. Now Silicon Valley wants to make them our wallet, too.

Several tech firms have spent the last few years trying to convince consumers their phone is a more convenient payment method than cash or plastic. Most shoppers have balked. But on Monday, Apple is entering the fray, and experts say that could be a turning point for the long-hyped mobile payments industry.

Apple’s service, dubbed Apple Pay, allows customers to buy goods in physical stores with a simple tap of their iPhone 6, iPhone 6 Plus or Apple Watch smartwatch, when that device hits shelves in early 2015. Apple Pay users load their credit card information onto the phone, then press their device’s Touch ID fingerprint scanner in the checkout line to authenticate the purchase. The process is faster than using a debit card — and more secure. Apple generates a unique ID number for each transaction, meaning users’ credit card data numbers are not shared with merchants.

Apple Pay is launching just as the smartphone is becoming a central point of commerce for the average shopper. Consumers spent $110 billion via their mobile devices last year, according to research firm Euromonitor, and they used their phones plenty more to research products before buying them in stores. Meanwhile, person-to-person payment apps like Venmo have made people comfortable loading their phones with dollars to make simple transactions.

“All of that is really conditioning consumers to trust their phones when it comes to payments,” says Michelle Evans, a senior consumer finance analyst at Euromonitor.

But consumers are still reluctant to give up their credit cards. Mobile payments generated $4.9 billion in sales in 2014, a paltry figure compared to the year’s $4.8 trillion in card transactions, according to Euromonitor. Google’s own mobile payments service, Google Wallet, offers much of Apple Pay’s functionality but hasn’t seen widespread adoption. Startup Square abandoned its much-hyped mobile wallet platform earlier this year, instead pivoting to an order-ahead service like Seamless. PayPal, which is spinning off from eBay in 2015, has also struggled find a mobile formula that works in stores.

“It’s definitely starting to catch on, but I don’t think anybody has quite nailed the overarching reason to pull out your phone to pay,” says Anuj Nayar, PayPal’s senior director of global initiatives.

The transition to mobile payments is a challenging one because it requires buy-in from so many different players. Consumers have to be convinced it’s worth their time to learn a new buying behavior. Retailers have to pay for new equipment so their point-of-sale systems can accept payment from phones and smartwatches. Banks and credit card issuers also have to buy in. “It’s a lot of people to get in lockstep,” says Evans.

Apple does have a few key advantages over its competitors. The company has a knack for convincing people to change their digital lifestyles, whether by downloading MP3s, surfing the web on a phone or using a large tablet to watch videos. And thanks to the iTunes Store, Apple has more than 500 million credit cards already on file. Those customers will be able to seamlessly start using the same accounts they use to buy apps and music to buy goods in the real world when they first boot up Apple Pay. “We’ve never had this large of a base in a starting country” for a mobile payment system, says Matt Dill, Visa’s senior vice president for Innovation & Strategic Partnerships, Commerce and Network Payments.

However, analysts say convincing shoppers to give up credit cards, which are already fairly painless to use, will take more than just offering convenience. The most successful mobile payments platform to date is the Starbucks app, which rewards customers who pay via their phones with free drinks and other perks. Today, Starbucks processes about 15% of all its transactions on the app, or about 6 million per week.

“The customers really feel It’s not just about payments,” says Ben Straley, Starbucks’ vice president for digital products. “It’s also about being rewarded for their loyalty.”

But even if Apple can convince consumers to take their money mobile, some merchants aren’t playing ball. Wal-Mart, America’s largest retailer, won’t support Apple Pay at launch. Instead, it and other big-box stores like Best Buy are developing a competing mobile payments platform called CurrentC, set to launch sometime next year. Such merchants would have to be the driving force behind any effective loyalty rewards program that convinced shoppers to abandon their credit cards.

With so many competitors offering mobile payment options, analysts expect the segment will finally take off soon. Euromonitor projects in-store purchases via phone will rise to $74 billion by 2019 — though that’s still a far cry from the trillions in card purchases we see today. Mobile devices are already becoming a common tool for buying things in the virtual world. It could very well happen in the real world, too. “It’s just shopping, whether you’re buying it in a store or buying it online,” says PayPal’s Nayar. “The lines between what that looks like have started to disappear.” 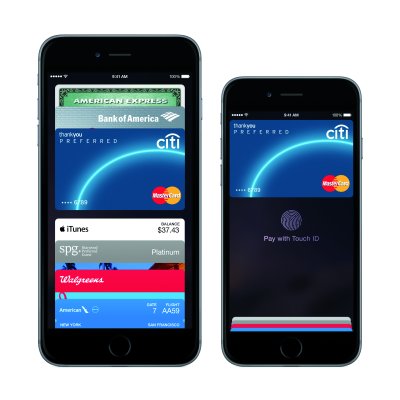 How to Set Up Apple Pay on Your iPhone or iPad
Next Up: Editor's Pick