The Exact Perfect Amount of Time to Take a Break, According to Data

A lot of productivity gurus advise taking breaks during the day to keep from burning out. But how often should you take breaks, and how long should they be? That’s not as easy an answer.

Productivity app DeskTime lets employers see if their people are working or goofing around on Facebook or Buzzfeed. It sifted through the computer activity data of its 5.5 million daily logs to come up with the 10% most productive workers, then it took a peek at how they spend their time during the day.

The result: The most productive workers engage in job-related tasks for 52 minutes, then take a 17-minute break. That 15-to-20-minute window is productivity’s “golden hour” (or quarter-hour, as the case may be). It’s long enough for your brain to disengage and leave you feeling refreshed, but not so long that you lose focus and derail momentum on what you were doing.

The key to getting the most out of those breaks is to throw yourself into your work during those 52-minute increments, since you know there’s a light at the end of the proverbial tunnel.

“The notion that whatever you do, you do it full-out,” DeskTime says on its blog. “During the 52 minutes of work, you’re dedicated to accomplishing tasks, getting things done, making progress. Whereas during the 17 minutes of break, you’re completely removed from the work you’re doing – you’re entirely resting.”

Giving your brain some down time to avoid losing focus and making sloppy mistakes that slow you down has proven benefits. Wharton School doctoral student Hengchen Dai, discussing her new research, tells the Harvard Business Review that breaks make people more diligent. “The more relaxed and disengaged from work people feel during a break, the more likely they will be to benefit from taking time off,” she says.

In a study of doctors, Dai and her co-authors found that those at the end of their shifts washed their hands less frequently — a mistake that could put themselves and patients at risk.

So don’t feel guilty about taking a walk around the block or checking your fantasy football stats. As long as you jump back into work with both feet, that physical and mental disengagement makes you more productive. 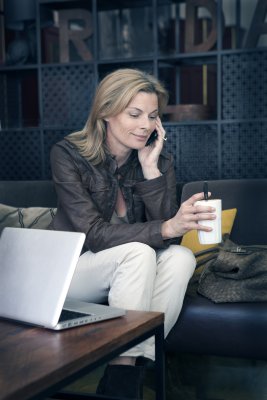 10 Ways to Stop Feeling Overworked and Overwhelmed
Next Up: Editor's Pick