Why Airlines and the CDC Oppose Ebola Flight Bans

Dr. Tom Frieden, Director of the CDC, during testimony at the Rayburn House Office Building on October 16, 2014 in Washington, DC.
The Washington Pos/Getty Images
By Tessa Berenson

The debate surrounding travel bans as a way to curb the spread of Ebola has intensified after Thursday’s congressional hearing, unleashing a flurry of impassioned arguments on both sides.

The stakes are high: those for a flight ban believe it’s a necessary protection against a deadly epidemic that has already reached American soil, but those against it say a ban would make the U.S. even more vulnerable to the virus.

Rep. Tim Murphy (R-Pa.), who ran the hearing, wants to prohibit all non-essential commercial travel from Guinea, Liberia and Sierra Leone, as well as institute a mandatory 21-day quarantine order for any American who has traveled to the stricken African nations. This quarantine would include a ban on domestic travel.

Murphy explained his position at the opening of Thursday’s hearing: “A determined, infected traveler can evade the screening by masking the fever with ibuprofen… Further, it is nearly impossible to perform contact tracing of all people on multiple international flights across the globe, when contact tracing and treatment just within the United States will strain public health resources.” Murphy is not alone; other lawmakers such as House Speaker John Boehner and Rep. Fred Upton (R-Mich.) agree.

The Centers for Disease Control and Prevention (CDC), however, maintains that these congressmen have it backwards. While they think a travel ban would secure the U.S. border from Ebola and shrink the potential spheres of contact, CDC director Tom Frieden says instituting a flight ban would forfeit what little control we currently have over the virus.

Even if Republican lawmakers are correct that a travel ban could curb the spread of Ebola in the U.S., it would also curb the movement of American health workers to the West African countries that are already desperate for more aid.

“If we do things that unintentionally make it harder to get that response in, to get supplies in, that make it harder for those governments to manage, to get everything from economic activity to travel going, it’s going to become much harder to stop the outbreak at the source,” Frieden said this week. “If that were to happen, it would spread for more months and potentially to other countries, and that would increase rather than decrease the risk to Americans.”

There’s also a practical concern surrounding the bans. Thomas Eric Duncan, the first person to be diagnosed with Ebola in the United States and who later died from the disease, took three flights and flew on two airlines on his trip from Monrovia, Liberia to Dallas, TX, stopping in Belgium on the way. Prohibiting travel from West Africa to the United States quickly falls down the rabbit hole of connecting flights in Europe, especially since there currently aren’t any direct flights between the U.S. and the primary Ebola hot zones.

A spokesperson for Airlines for America, the industry trade organization for leading U.S. airlines, told TIME, “We agree with the White House that discussions of flight bans are not necessary and actually impede efforts to stop the disease in its tracks in West Africa.”

And if domestic or international travel bans were to be instituted, others familiar with the airline industry warn of unintended consequences. Greg Winton, founder of The Aviation Law Firm outside Washington, D.C., told TIME that mass flight restrictions “will have a huge impact financially, certainly on the whole economy, not just the aviation sector.”

But at this point Winton says anything is possible, citing the Federal Aviation Administration’s shut down of air travel following 9/11 as an extreme precedent. “As far as FAA aviation law, none of that really takes precedence over disease control at this point,” he said. 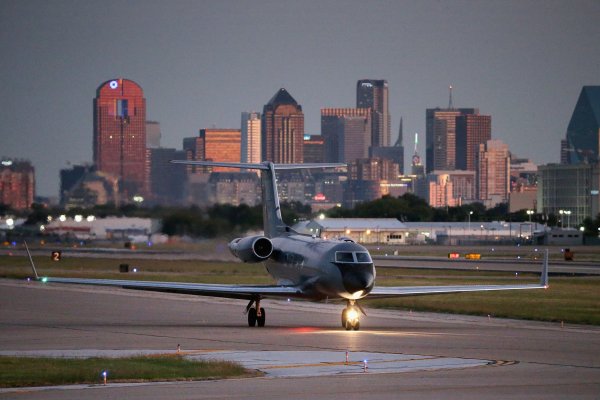 Ebola Patient in Maryland
Next Up: Editor's Pick