A member of the media displays an Apple Inc. iPad Mini 3, left, and iPad Air 2 for a photograph after a product announcement in Cupertino, California, U.S., on Thursday, Oct. 16, 2014.
Bloomberg—Bloomberg via Getty Images
By Alex Fitzpatrick

Apple unveiled a pair of new iPads during a somewhat subdued event Thursday at its Cupertino, Calif., headquarters. At first, it seemed there was nothing groundbreaking about the iPad Air 2 and iPad mini 3 — these were somewhat boring, iterative improvements like thinner bodies, faster processors and the inclusion of Touch ID. But one feature of the iPad Air 2 that Apple didn’t even talk about on stage represents a change that could foretell a future where consumers have unprecedented choice over their mobile carrier.

The WiFi + Cellular models of the iPad Air 2, as revealed only on Apple’s website after Thursday’s event, comes with something called an “Apple SIM.” SIM cards are small, rectangular devices used by many mobile carriers to identify customers on their networks. If your mobile carrier uses SIM cards, you can switch your service to another device simply by popping the card out of your old device and putting it in your new one. It’s also possible in many cases to bring your old device to a new mobile carrier by getting rid of your old SIM and replacing it with a card supplied by your new carrier — a common practice among travelers, who have to hop from carrier to carrier as they cross from one company’s territory into another’s.

What the new Apple SIM changes is that iPad Air 2 owners who want to bring their device from their current mobile carrier to a new one no longer have to get a SIM card from their new carrier. Instead, switching carriers is as simple as selecting the new company from a menu option on their iPad, provided the carrier is one that currently supports Apple SIM — AT&T, Sprint, T-Mobile and European carrier EE, for starters.

“The Apple SIM gives you the flexibility to choose from a variety of short-term plans from select carriers in the U.S. and U.K. right on your iPad,” Apple wrote on its website for the iPad Air 2. “So whenever you need it, you can choose the plan that works best for you — with no long-term commitments.”

That sounds pretty nice for iPad owners, but what about iPhones? For now, Apple SIM is only found in iPads with wireless data capabilities, which serve a much different function than phones. But it’s not hard to imagine a future where Apple puts its Apple SIM in every iPhone on the market, making it that much easier to change your wireless carrier on the fly. As Quartz noted Friday:

That sounds really nice, but it’s still far from reality. Some mobile carriers may be happy to experiment with the Apple SIM for tablets like the iPad, but their contractual chokeholds on cellphone owners are far too lucrative for them to loosen up easily — and, notably, America’s biggest mobile carrier, Verizon Wireless, is absent from the Apple SIM iPad plan (though, for historical and technical reasons, Verizon was slow to embrace SIM cards at all). Apple did not immediately respond to a question regarding whether it will put the Apple SIM in iPhones.

The future of how you pick and choose from mobile carriers will ultimately depend on how far Apple is willing to go to break up the status quo. If the tech giant truly does want to rid the world of the two-year contract, it’ll need the carriers’ cooperation, even if reluctantly given, to do so. Apple has power here: It could conceivably threaten to pull the iPhone from any carriers that don’t play ball with Apple-SIMs-in-iPhones, using its devices’ popularity with consumers as a means of squashing dissent. But Apple’s theoretical plan here can also be beaten: If the carriers band together in refusing the idea, it would go nowhere fast. 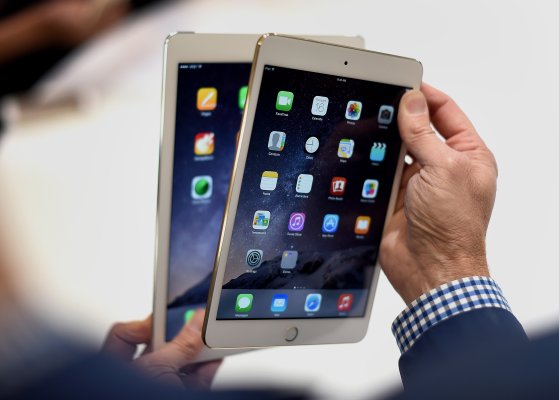 Hands-On With Apple's New iPads
Next Up: Editor's Pick