Riot police clash with student protesters outside Taiwan's cabinet offices in Taipei on March 24, 2014. Clashes erupted after Taiwan's President refused to scrap a contentious trade agreement with China and denounced the "illegal" occupation of government buildings by students opposed to its ratification
Lam Yik Fei—Getty Images
By Emily Rauhala / Beijing

Taipei police used batons and water cannons to clear protesters from Taiwan’s government headquarters Monday morning. A group of several hundred demonstrators had been occupying Cabinet offices Sunday night as part of a student-led movement against a trade pact with China. The mostly student protesters say the deal hands too much influence to China, is undemocratic and will hurt the island. The government insists it is an economic imperative. By early Monday, people were being pulled from the premises. At least 58 were arrested and 137 were injured, reports the Associated Press.

The scenes of violence seem out of place — for the movement, and for modern-day Taiwan. The student-led campaign gained momentum last week, when a group of demonstrators occupied the parliament in Taipei. They are pushing for a further review of the Trade in Services Agreement (TiSA), a deal that will open certain service sectors to investment from China, and vice versa. The demonstrators spent much of the past week gathered around the parliament chanting and waving colorful cardboard signs. They are mostly young, and their methods largely peaceful. Their emblem is a sunflower, symbol of hope.

The bloody scene in Taipei harks back to a different, darker era. On Feb. 28, 1947, the nationalist Kuomintang, violently suppressed antigovernment protests, killing over 10,000. Almost four decades of martial law followed. It was not until 1986 that an opposition party, the Democratic Progressive Party, emerged and a democracy slowly took root.

Taiwan’s democracy has deepened and grown since, giving rise to a political culture in which people take seriously their right to vote and protest. To some Chinese, particularly in Hong Kong and Macau, Taiwan is a model. The island’s 2012 presidential poll was closely watched by both Special Administrative Regions. At polling stations in downtown Taipei, I met election tourists who had flown from Hong Kong to see what they called a “preview” of Chinese democracy in action.

China and Taiwan have been at odds since 1949, when retreating nationalist forces fled across the strait. The People’s Republic still sees Taiwan as a renegade province and holds out hope for unification, even by force. (Should that happen, the U.S. would be bound, by a congressional act, to help Taiwan.) Taiwan’s current President, Ma Ying-jeou, swept to power in 2008 promising to deepen ties with China and was re-elected in 2012. His push for economic integration has seen cross-strait trade and tourism rise. It has also made him deeply unpopular among certain segments of the population.

To the young people and opposition-party supporters gathered in Taipei, TiSA is another step toward China, and a step too far. They also worry that this latest round of economic liberalization will hurt small and medium-size businesses on the island. More fundamentally, they see TiSA as a sign of Sinification and worry that President Ma and the governing party, Kuomintang, are to keen to trade away the island’s hard-earned, democratic gains.

President Ma and his government say the trade deal will bolster the economy and keep Taiwan competitive with countries like South Korea. Addressing demonstrators on Sunday, he applauded their passion but questioned the decision to occupy government offices. “Is this the sort of democracy we want?” he asked. “Must the rule of law be sacrificed in such a manner? Do we not take pride in our democracy and our respect for rule of law?”

The battle for Taipei has no doubt caught the attention of officials and ordinary people across the Taiwan Strait. The ruling Chinese Communist Party tightly controls the press and censors discussion of sensitive subjects, including Taiwan, from the country’s widely popular microblogs, so the reaction has been somewhat muted. A few applauded the students. Most posts that made it through the censors were critical: “This isn’t the democracy we want,” was the refrain.

But it is Taiwan’s democracy, for better and for worse. And, as the past week’s events show, young Taiwanese will fight for it.

An earlier version of this article misidentified the site cleared of protesters by the police. It was the government headquarters, not the parliament. 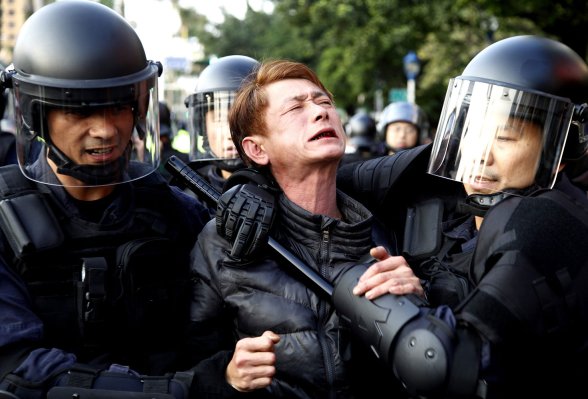 Taiwanese Students Carry Out Epic Occupation of Parliament
Next Up: Editor's Pick