Fire is seen after an US airstrike on ISIS positions in Kobani, Syria, on Oct. 15, 2014.
Ahmet Ozturk—Xinhua/SIPA
By Piotr Zalewski / Suruc, Turkey

The Syrian city of Kobani, just across the border from Turkey, breathed easier Thursday as U.S. coalition airstrikes helped dislodge jihadist fighters from the Islamic State of Iraq and Greater Syria (ISIS) from several neighborhoods.

Speaking by phone from Kobani on Thursday, Anwar Muslim, the head of the local government, told TIME that the People’s Protection Units (YPG), the Kurdish forces defending the enclave, were now in control of “65 to 70 percent” of the besieged city. In neighborhoods in the south and east, he said, ISIS fighters were in partial retreat. In the west, they remained about three miles away.

But he cautioned against premature optimism. ISIS had lost “many men,” he said, “but they keep sending car bombs, mortar shells, and yet more fighters into the area.”

He claimed there were “more than a thousand civilians” still trapped in the city center. With ISIS snipers and mortars targeting neighborhoods close to the border crossing with Turkey, “it’s too dangerous for the people to leave,” he said. “We are asking the U.S. and the U.N. to set up and operate a humanitarian corridor to Kobani.”

Turkish officials, however, insisted that only Kurdish and ISIS forces remained inside the city. “There are no civilians left in Kobani,” Bulent Arinc, the country’s deputy prime minister, told reporters on Wednesday. “All of them are in Turkey.”

“We know we’ve killed several hundred of them,” Rear Admiral John Kirby, a Pentagon spokesman, said Wednesday, referring to the ISIS fighters massed near Kobani. He noted, however, that the city “may very well still fall.”

“They are bombing the right targets,” Muslim said of the U.S. coalition. “At the beginning, ISIS had plenty of tanks and trucks, but that is no longer the case.” He declined to confirm, however, whether YPG forces were providing the U.S. and coalition partners with coordinates of jihadist positions around the city. “We are cooperating, and our actions have been complementary,” said Mr. Muslim. “There is contact.”

The YPG is widely believed to be an extension of the Kurdistan Workers’ Party (PKK), which the U.S., the European Union, and Turkey all consider a terrorist group, making it difficult for the militia to open official channels with Washington.

With both sides exhausted by more than a month of clashes, desperation appears to be creeping in. According to the Syrian Observatory for Human Rights, a monitoring group, Kurdish security forces have rounded up hundreds of people of fighting age in Kurdish strongholds east of Kobani over the past week, forcing them to join YPG ranks. The month-long siege has taken its toll on ISIS, too. The jihadists, said Muslim, have begun resorting to suicide attacks inside Kobani.

The role of U.S. and coalition forces in the battle for Kobani may now be more crucial than ever. Zuhal Ekmez, the co-mayor of Suruc, a Turkish town just a few miles from the Syrian border, said that it was only this week that the airstrikes had begun tilting the balance in the YPG’s favor. “Before, they weren’t effective,” she said. “They are now, but we need them to go on.”

On Thursday afternoon, following a morning of relative quiet broken only occasionally by the chatter of gunfire and the wail of a fighter jet, a series of loud explosions shook the air above Kobani. As columns of smoke grew from the ground, a small group of Syrian refugees began to gather in a field on the Turkish side of the border. Passing around a single pair of binoculars to better follow the fighting inside their hometown, they pointed to a hill to the east of Kobani, where ISIS fighters had earlier planted their black flag. The flag, they noted, was gone. 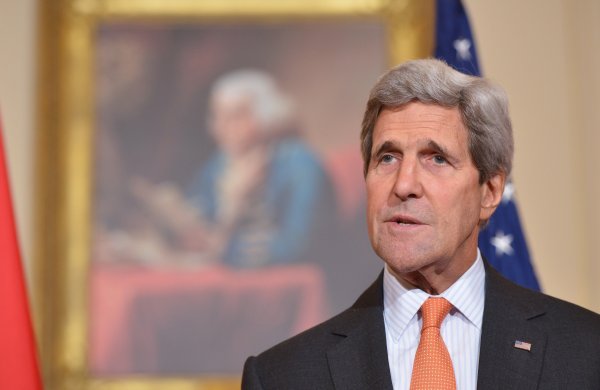 Kerry: Besieged Syria Town Not Critical to Anti-ISIS Effort
Next Up: Editor's Pick