To the Islamic State, Syrian women are slaves. To much of the rest of the world, they are victims.

It’s time we expose their real identity: an untapped resource for creating lasting peace. Listening to and implementing the ideas of women still living in Syria is key to weakening ISIS and stabilizing the region at large because, in many ways, they have a better track record laying the foundations for peace and democracy than any other group.

Over the last two years, we’ve worked side-by-side with Syrian women leaders as they propose concrete steps to end the war. Most recently, we brought several women representing large civil society networks to Washington, D.C., where they cautioned against the current approach of the international community – and proposed a very different blueprint for the region’s future.

More arms and more bombs, they said, are not the answer.

They insisted that the only way to fight this extremist threat is to return to the negotiating table and hash out a peaceful political transition to heal the divisions ripping Syria apart.

“Oppression is the incubator of terrorism,” one woman told us as the group prepped for meetings with high-level officials in D.C. and New York. Her participation in peaceful protests during the early days of the revolution led to her two-month imprisonment in a four square meter room shared with 30 other women—yet she was adamant: “We cannot fight ISIS except through a political approach.”

That women who’ve been hunted and tortured for their nonviolent activism still say “no more bombs” is remarkable. That their solutions are forward-looking and inclusive is unsurprising; we’ve seen similar approaches from women in conflicts all over the world. In Colombia, Northern Ireland, Uganda, and dozens of other places, women have been catalysts for sustainable, inclusive peace.

During three-plus years of war, Syrian women have consistently led efforts to end the violence and mitigate suffering. They’ve worked under the direst circumstances: dodging sniper bullets, evading arrest, surviving without adequate food or medicine. They’ve retained hope and determination in ways that most of us would find impossible.

That’s precisely why we must listen to them.

So what do they recommend? To create stability (which is kryptonite to extremists), Syrian women say three things must happen.

First, humanitarian aid must get to the millions in grave need. Almost three million people are registered as refugees in neighboring countries and over six million are displaced inside Syria. That’s in a country with a pre-war population of just under 18 million. Approximately half of the remaining inhabitants live in extreme poverty.

In response to this disaster, the UN made an urgent appeal for $2.28 billion just to meet the critical requirements of the internally displaced. So far, Member States have committed only $864 million—a little over one-third of the total. Last month, the UN was forced to cut the delivery of food aid by 40 percent.

Violent extremism thrives in areas where social services have all but disappeared. A woman who serves on the local council of an opposition-held town told us that she fears more of her neighbors may become radicalized because there’s no work, no education, and no other opportunities.

Women have been deeply involved in distributing and monitoring humanitarian aid in communities across Syria. Typically perceived as less of a threat, they’re able to smuggle supplies through checkpoints without being searched. This affords them first-hand witness of the different needs of zones under government, opposition, Islamic State, or other control. They’ve seen, for instance, that food baskets can’t get into areas blockaded by the regime; in these circumstances, cash transfers are more effective. To reach the greatest number of people, relief agencies should coordinate with civil society and devise humanitarian strategies that reflect these differences.

Second, international actors must encourage local pockets of stability. Beyond funding, a key barrier to humanitarian access is the ongoing violence. Besieged areas are the hardest to reach and most in need.

Here too, women have a solution. Though missing from most news reports, a number of local ceasefire arrangements have proliferated throughout the country, often negotiated by civil society actors. In the Damascus suburbs, a women’s group brokered a ceasefire between regime and opposition forces. For 40 days before fighting resumed, they were able to get essential supplies into the city.

Syrian women are now calling on the UN to not only track these local arrangements, but assign international monitors to ensure parties stick to them. Beyond opening channels for the passage of humanitarian aid, this may also help the parties come closer to an agreement to cease hostilities on the national level. This will require accountability, as these negotiations are all too often used as a tool of political manipulation.

Which brings us to the third, and potentially most important, step: The parties must return to internationally-mediated negotiations and agree on a political solution to the conflict. The last round of talks in Geneva failed, it’s true. But this is still the best solution to the burgeoning civil war and the opportunistic extremism that has followed it. Only a unified Syria can beat back the ISIS threat.

Convincing both parties to come back to the table won’t be easy. But Syrian women have identified concrete ideas that could help unite disparate factions by encouraging them to cooperate on mutually beneficial activities. For instance, the regime and opposition could coordinate the safe passage of university students between government- and nongovernment-controlled areas to allow them to resume their studies. The women also call on parties to prioritize construction of temporary housing for those displaced by the conflict on both sides. These actions could help cultivate trust between the regime and opposition and encourage popular support on all sides for renewed negotiations.

As important is the construction of an inclusive peace process. One that engages women, but also others who have thus far been missing from the conversation: the Kurds, Druze, youth, independent civil society networks, tribal leaders, and, yes, more radical elements like Jabhat al-Nusra, who can otherwise spoil the talks from the outside. Without this, no agreement stands a chance.

These three priorities—humanitarian relief, support for local ceasefires, and resumption of negotiations—are not the result of idealistic or wishful thinking. This is not an abstract call by Syrian women to “give peace a chance.” It’s a plea for policy approaches that are grounded in the lived experiences and long-term goals of the vast majority of the Syrian people.

Regional and global stability depend on the international community getting this right. Luckily for us, Syrian women—and civil society more broadly—know exactly what it will take to rebuild their country and undermine the ambitions of the Islamic State. Will we listen?

Kristin Williams is Senior Writer and Program Officer at The Institute for Inclusive Security, where she calls attention to the most powerful, untapped resource for peace: women.

Michelle Barsa is Senior Manager for Policy at Inclusive Security Action, where she focuses on expanding the role for women in peace and security processes, particularly in Afghanistan and Syria. 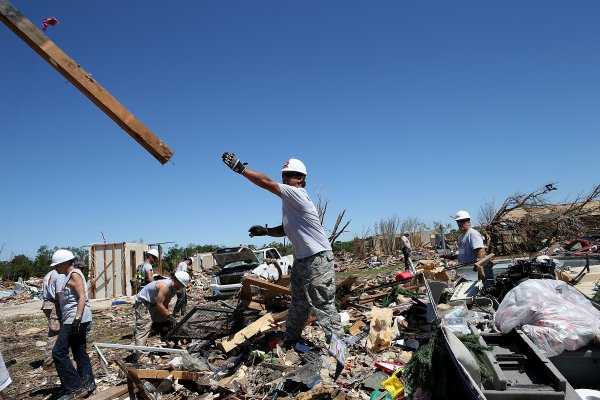 Why We Should Send Vets Back to Iraq and Afghanistan
Next Up: Editor's Pick