The One Thing Everyone Should Do After an Apology

PeopleImages.com—Getty Images
Ideas
By Josh Misner
Dr. Josh Misner is a mindfulness researcher, communication educator and father of four. You can follow him on Facebook and at Mindful Dad.

After listening to a TEDx talk given by my former dissertation committee chair, Dr. Shann Ray Ferch, I realized that it had caused a seismic but subtle shift in my life. Speaking on art, love and forgiveness, Dr. Ferch shared the story of meeting his future father-in-law, where he was told:

This incident struck me for its profound difference between merely apologizing and taking it a step further to seek forgiveness.

When I say “I’m sorry,” I admit wrongdoing by taking responsibility for my actions. It is something I have long taught my children. As a result, my kids are now pros at saying sorry, and in retrospect, I’ll admit that it can easily get old after hearing it for every little transgression. For a while, I could not understand why my kids saying sorry so frequently started bugging me, but after hearing Shann’s story, it all clicked.

The lesson this parable tries to teach is to think critically about one’s actions beforehand, so that an apology is not necessary. But, as humans, we are imperfect creatures, and we need to restore the dignity of others whom we have wronged.

Dr. Ferch’s story reminded me that asking for forgiveness is a necessary addition to an apology. If saying sorry is akin to admitting fault, then doing so is not enough to restore a relationship. Taking the extra step to ask for forgiveness involves a dramatic shift in power, which requires humility on the part of the asker and subsequently places power into the hands of the person wronged. By gifting this power to the person whose dignity was robbed, it effectively restores and heals the proverbial wound.

I was anxious and able to test this theory when, one weekend, my kids’ sibling infighting was incendiary and constant, ratcheting my anger up several notches until an argument over who had to let the dogs in pushed me over the edge.

At that point, I blew it.

My yelling started with low-level voice-raising, but was soon followed by the slightly louder and more insistent classic, “It would be really nice if you two would just do what I said without fighting about it for once!” As I threw my dad tantrum and stomped around, I avoided making eye contact. But as soon as I stopped my fit, I turned and locked eyes with them. Their once-bright eyes, normally dark with curiosity and wonder, were red and brimming with tears, as their cheeks sagged under the weight of their shame and remorse. My son turned and ran to his room, while my daughter stifled a quiet sob as she, too, walked away.

At that point, I swallowed my anger and the sting of regret quickly set in. Recalling Dr. Ferch’s talk, I called both kids back into the room.

“Kids,” I said gently, “I’m sorry. I was wrong to take my anger out on both of you like I did, and the way I yelled at you was embarrassing. Will you forgive me?” My heart sank, my voice trembled, and I could feel a familiar stinging in my eyes, knowing tears were soon on the way.

As if by instinct, both children leapt up simultaneously, wrapping their arms around me and supplementing their embrace with a slightly muffled yet reciprocal response together: “We forgive you. We’re sorry too, daddy. Will you forgive us?”

In similar circumstances in the not-so-distant past, our apologies had a very different feel. They were almost like verbal punctuation on the end of an argument, but with a touch of “To be continued,” almost as if acknowledging that the conflict might resurface at a later date.

The difference between an apology and seeking forgiveness is profound and not to be taken for granted. Teaching our children to take responsibility for their actions is important, and we should remind them to apologize when they have wronged someone. But we also need to demonstrate to them the power inherent in restoring relationships using four simple words: Will you forgive me?

Dr. Josh Misner is a mindfulness researcher, communication educator and father of four. You can follow him on Facebook and at Mindful Dad. 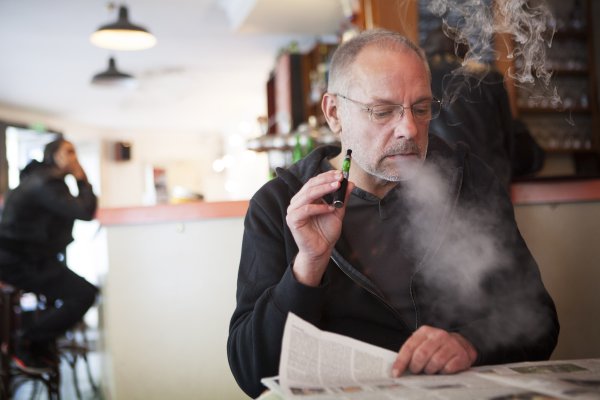 An Open Letter to the Person Smoking Their E-Cigarette Indoors
Next Up: Editor's Pick