From Left: Center for Disease Control and Prevention Director Tom Frieden and National Institute of Allergy and Infectious Disease Director Anthony Fauci testify before a House Energy and Commerce Oversight and Investigations Subcommittee hearing on the U.S. response to the Ebola crisis, in Washington D.C. on Oct. 16, 2014.
Jonathan Ernst—Reuters
By Alex Rogers

Republican lawmakers pushed for stricter travel restrictions Thursday, firing questions at Obama Administration officials after revelations that a health care worker infected with the disease flew on a plane shortly after treating a patient who had died of the virus.

Amber Joy Vinson worked to help treat Thomas Eric Duncan, a Liberian man who died on Oct. 8, at Texas Presbyterian Hospital but rode on an airplane on Oct. 13, just a day before she developed a fever. It was revealed late Wednesday night that the CDC had actually cleared Vinson to fly; she was diagnosed with Ebola on Tuesday.

Shortly after the hearing, President Barack Obama signed an executive order allowing the Department of Defense and Department of Homeland Security to call up any military and Coast Guard reservists needed for the Ebola response effort in West Africa, where up to 4,000 American troops are preparing to deploy. He also thanked the CDC for dispatching an additional team of 16 people with experience in Ebola to Dallas where they will train and assist in hospital infection control procedures.

“None of us can understand how a nurse who treated an Ebola-infected patient, and who herself had developed a fever, was permitted to board a commercial airline and fly across the country,” said Rep. Fred Upton (R-Mich.), the House Energy and Commerce Committee Chairman. “It’s no wonder the public’s confidence is shaken.”

Upton joined other lawmakers, including Rep. Tim Murphy (R-Pa.) and House Speaker John Boehner, who want the Administration to consider travel restrictions between the U.S. and West African countries, where the outbreak has killed more than 4,500 people. “It needs to be solved in Africa but until it is, we should not be allowing these folks in, period,” Upton said at the hearing.

Embattled Centers for Disease Control and Prevention Director Dr. Thomas Frieden countered that the Administration can better track people from the most vulnerable countries in West Africa without restrictions on travel.

When pressed by Murphy if the Administration would ever consider changing its mind, Frieden said it would “consider any option to better protect Americans.”

Rep. Henry Waxman (D-Calif.) said that he didn’t believe travel restrictions would be an effective protection measure, since people will find other avenues of travel. Waxman shifted blame from the CDC and the Obama Administration, instead focusing ire on Congress for “irrational budget cuts” that have dropped CDC’s funding by 12% when adjusted for inflation since 2006.

Obama said Thursday evening that he is considering appointing an Ebola czar. “It may be appropriate for me to appoint an additional person,” he said, quickly adding that it wouldn’t be because people like Frieden “haven’t been doing an outstanding job working hard on this issue.”

“They are also responsible for a whole bunch of other stuff,” he said. Like flu season. 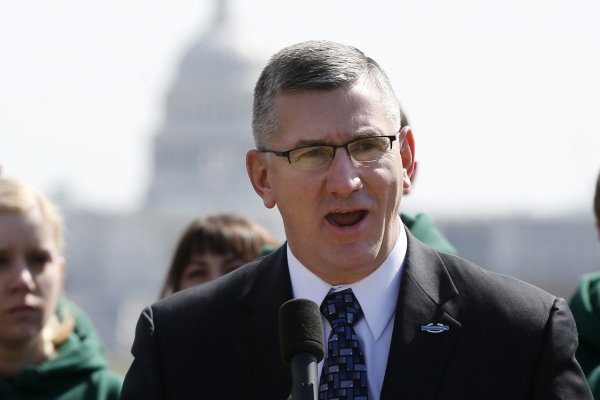 Senator's Degree Revoked Over Plagiarism Charges
Next Up: Editor's Pick