How to Financially Starve ISIS

The U.S.-led air assault in Iraq and Syria on the extremist group the Islamic State of Iraq and Greater Syria(ISIS) is just one front in the battle being waged against ISIS. The U.S. Treasury recently confirmed plans to try to bankrupt the militant group by targeting its oil businesses and imposing sanctions on those financing them. But how easy will it be to financially ruin a group now considered by analysts to be the best-funded terrorist organization in recent history?

“Like all organizations, money matters to ISIS,” says Fawaz Gerges, the Emirates chair in Contemporary Middle Eastern Studies at the London School of Economics. “Napoleon once said ‘An army marches on its stomach’ and even ISIS needs to feed and arm its soldiers, to provide for their families. If you follow the trail of money and starve ISIS financially, you begin the process of degrading and ultimately paralyzing it.”

Yet following this trail of money is difficult. Experts speaking to TIME say hard figures are difficult to come by, partly because of a lack of independent researchers and journalists in the area. ISIS also deals mainly in cash and operates outside the legitimate channels that can be traced by the Treasury, says Valérie Marcel, a Middle East energy and resources expert at London-based think-tank Chatham House. As a result, estimates of ISIS’s daily revenue vary between $1 million and $3 million a day. Gerges says that ISIS has estimated funds of tens of millions of dollars, and that in the last few months the group has reportedly tried to limit its spending as much as possible to counter the coalition’s efforts to cut off its funding.

As ISIS has grown in size and taken control of large parts of Syria and Iraq, its sources of income have also shifted. Justin Dargin, a Middle East energy specialist based at the University of Oxford, says that “while funding from wealthy Gulf patrons assisted the group’s early rise, currently individual donations are not of major importance” since ISIS has developed more independent sources of income. David Butter, a Chatham House expert in the politics and economy of the Middle East, agrees, noting that ISIS benefits from being far less reliant on funds from abroad than other Islamist and Salafist jihadist groups, who made themselves overly dependent on the one-off nature of such fundraising. In fact, experts say one major difference between ISIS and other jihadist groups is ISIS’s more pragmatic outlook. Whereas al-Qaeda was more focused on setting up cells to finance anti-Western terrorist operations, ISIS has concentrated on expanding its area of control, taking hold of natural resources and commercial centers, as well as tens of thousands of tons of weapons and ammunition.

In June of this year, ISIS seized more territory in Northern Iraq, including Mosul, the country’s second-largest city. It declared itself the “Islamic State” and developed revenue streams more typically associated with a government than a jihadist group. Though it’s difficult to establish how well ISIS is running the areas under its control, Paul Rogers, a global security consultant to Oxford Research Group, says that information from social media suggests that “ISIS seem quite competent to run things in Syria” and most areas seem to be functioning reasonably well. Since ISIS has continued to provide services like water and electricity, Gerges says the group has been able to impose taxes on farmers, retail businesses and even fuel. He adds that we should not underestimate the importance of this “social income” in both Iraq and Syria, since ISIS “have been able to generate sources of income to run the provinces under their control and also to generate extra income to wage their battles.”

Yet while ISIS might attempt to act like a state, much of its money is brought in by criminal tactics, including extortion, theft and plundering. For instance, senior U.S. government official Brett McGurk told the Senate Foreign Relations Committee in July that even before ISIS took control of Mosul, he and other U.S. diplomatic and military officials who had visited the city shortly before it fell to ISIS had been concerned about Mosul “as it had become the primary financial hub” for ISIS, “generating nearly $12 million per month in revenues through extortion and smuggling rackets.” Hostage-taking has also played a part in filling ISIS coffers. According to an investigative report from The New York Times, kidnapping Europeans has earned al-Qaeda and its affiliates at least $125 million in ransom payments in the past five years alone. Although ISIS formally split from al-Qaeda in February, the group has continued the practice and both Gerges and Marcel have sources confirming that ISIS has received large sums of money from citizens of Saudi Arabia, other Gulf states and Syria in exchange for hostages. As well as Western hostages, the “kidnapping of locals is a big business”, says Gerges, and has generated tens of millions of dollars for ISIS and other militant groups like al-Nusra front, the branch of al-Qaeda operating in Syria.

But the majority of ISIS’s revenue appears to come from the territory it controls, much of which is “very rich agriculturally”, says Rogers. For instance, the United Nations estimates that land in Iraq under ISIS control accounts for up to 40 percent of the country’s annual production of wheat. Crucially, the militant group also holds a number of oil fields in both Iraq and Syria and analysts speaking to TIME estimate that the daily revenue from ISIS oil production lies between $1 and $3 million a day. Though this is barely a fraction of the global oil trade, the income is very useful in funding ISIS’s soldiers, who number between 20,000 and 31,500 according to the CIA. As ISIS took hold of more territory in Iraq and Syria in June, it gained more opportunities to sell both crude oil and refined products through well-established smuggling networks. “There are a lot of grey market buyers of crude in the region and a large network of individuals that benefit financially. It’s harder to dismantle because – whether it’s in the KRG [Kurdish Regional Government], in Turkey or in Iran – border guards and municipal authorities have to be paid well enough and given incentives to crack down,” says Marcel.

If the U.S. and its allies continue to bomb ISIS’s oil facilities, however, the group will begin struggling to fund itself. The Paris-based International Energy Agency said in a report released Tuesday that the aerial campaign has brought ISIS oil production down to around 20,000 barrels per day, from a high of around 70,000 a couple of months ago. If oil installations continue to be hit, ISIS will not be able to use its own military vehicles that run on the diesel and gas produced by small, local refineries. Yet it is the civilian population – between 6 and 8 million people in ISIS-controlled territory – that will most acutely feel the effects of the air strikes as winter approaches. The local population relies heavily on diesel for heating, agricultural machinery, bakeries and generators. The U.K.-based monitoring group the Syrian Observatory for Human Rights has already reported that the air strikes have led to an increase in the price of diesel and petrol. Butter says that if the ISIS economy is “degraded” by the bombings, there is likely to be a nationwide fuel and electricity crisis, as well as agricultural shortages exacerbated by the lighter than normal rainfall in 2013. In addition, Marcel points out that ISIS “depends to a large extent on the willingness of the population to have them there. In the battle to win hearts and minds, you do have to provide heating fuel and petrol.”

But if the group is to lose this battle any time soon, the coalition will have to succeed in cutting all the strands of ISIS’s vast financial web. Until then, ISIS will likely remain a threat to the region and beyond. 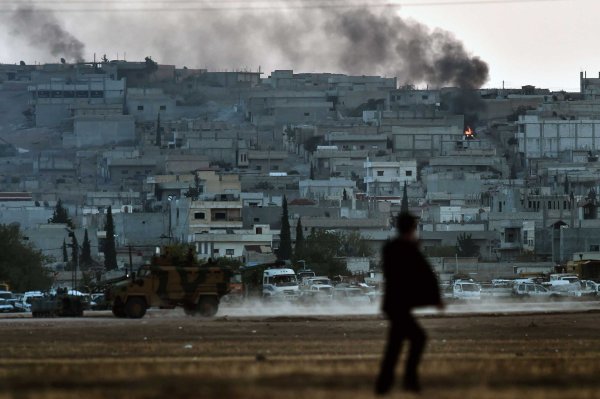