Goya: The Alfred Hitchcock of Painting

You can’t really blame Francisco Goya, whose life took him from a nowhere village to the royal court of Spain, for occasionally being a little full of himself. Survey his work and you start to suspect that not until Alfred Hitchcock was there another artist who put himself into his own pictures so much, including even his portraits of other people. So it makes sense that at the start of “Goya: Order & Disorder,” the very fine retrospective at the Museum of Fine Arts, Boston, there’s a group of his self-portraits. In Self-Portrait While Painting, he’s a middle-aged stud–a majo–about 49, at work before an easel, wearing a hat with a metal ring of candle holders, like shell cartridges. Its purpose was to let him work into the night. But it also seems a perfect emblem for Goya himself, the artist armed and ready to shed light onto the darkness of his own time.

Why is Goya so fascinating? The late Robert Hughes, his best English-language biographer, got to the point when he wrote that Goya was both “the last Old Master” and “the first Modernist.” By his 30s, Goya possessed the full toolbox of Old Master capabilities. Yet it’s hard to believe that he began his career in the mid–18th century, in the waning days of the Rococo, the same years that the representative French painters were Fragonard and Boucher. Their silky Parisians look not so different from the Spanish nobles in so many of Goya’s canvases, but Goya’s bleak imagination went places they would never dream of going, places that hold a key to the wars and atrocities of our own time. All those leering madmen, the levitating witches and simmering giants, the lumpen humans with their stupidity, superstition and cruelty–monsters and idiots infest Goya’s world. We know all about them from our own.

The Boston show, which runs through Jan. 19, is organized by themes: women, children, hunting and so on. This helps draw out resemblances among works done in different years but obscures the considerable drama of Goya’s life. He was born in 1746 in tiny Fuendetodos, halfway between Madrid and Barcelona, the son of a master gilder, a skilled craft but not the kind that makes you rich. His father died without a will–what was there to leave?–but before that the old man had arranged for his 13-year-old son to be apprenticed to a painter in the nearby city of Zaragoza.

Goya didn’t exactly rocket into the royal circle. There were years of apprenticeship, the customary travel in Italy and commissions here and there before his big break finally came in 1775. He was summoned to Madrid through his friend Francisco Bayeu, a court painter for Charles III, the Bourbon King of Spain. Charles had recently decided to revive the royal tapestry factory. His several palaces needed wall hangings, lots of them. Bayeu wanted Goya to produce the “cartoons”–actually full-scale oil paintings–that the tapestries would be based on. Goya was suited to the job. The cartoons are some of his loveliest and least-known work. But in 1780, as a cost-saving measure during a short-lived war, Charles closed the tapestry factory, which forced Goya to branch out into portraiture.

This was a good thing. It was in portraits that Goya first truly caught fire. In the reactionary backwater that was Spain, where the dogmas of the Catholic Church were beyond question, the Inquisition was still in business and the Age of Reason had been stopped at the border, many of his first sitters were drawn from Spain’s tiny cadre of liberals and relative free thinkers, the ilustrados who hoped to admit into their country a few mild beams of the Enlightenment. As his reputation spread, he was handed from one to another of them.

Among them was the music-loving Duke of Alba–in Goya’s creamy portrait, he’s a pensive man looking up from a score by Haydn–and his famously beautiful wife. The Duchess of Alba haunted Goya, the way she did half the men in Madrid. The Naked Maja, his best-known portrait of a woman (it’s not in the show) is a reclining nude, the eternal posture of sexual availability. But his second portrait of the duchess, from 1797, is a triumph of vertical authority, fully dressed and anything but languid. Goya gives her to us with one hand perched on her left hip; with her other she points forcibly down to words inscribed in the ground at her feet: Solo Goya. “Only Goya.”

The show’s curators, Frederick Ilchman and Stephanie Loeb Stepanek, think that may be Goya’s way of having her tell the world that only he could make such a superb painting. Hughes wondered if this picture weren’t something even stranger, a totem of romantic wish fulfillment–the painter imagining this unattainable woman declaring that he’s the only man for her. Maybe that explains why, 15 years later, it was still in Goya’s studio, where he could enjoy it alone.

We’re so inclined to think of Goya as the perennial critic of his times that it’s tempting to believe that even his likenesses of the royal family–he served four Kings and eventually became chief court painter–were meant to satirize them. Not likely. Having come so far, why would he jeopardize everything for the sake of an inside joke? But in his 50s the darker strains of his disposition began to surface elsewhere, mostly in his harrowing works on paper. In 1793 a mysterious illness left him completely deaf. In the isolation booth of the years that followed, he produced most of the works that gave us “our” Goya, the scabrous observer of hopeless humanity, the man who shows us a world where witches gather, bulls fly and Satan presides as a giant he-goat. The 80 etchings that make up the Caprichos–caprices or follies–are a peerless survey of hypocrisy, vanity and greed. But for Goya in full thunder, go to The Disasters of War, an inventory of wartime cruelties that was never published in his lifetime. One scene of pointless torture has the heartbroken title that could have served the whole series: Why?

Those ferocious images bear witness to the Peninsular War, the six-year campaign by Spain and England to expel French troops that had replaced the Bourbon royals with Napoleon’s brother Joseph–whom the adaptable Goya went right on serving as court painter. But when the Bourbons were restored, it was in the person of the awful Ferdinand VII. A decade after that arch-reactionary assumed the crown, an exasperated Goya left for self-imposed exile in France, where he died in Bordeaux in 1828.

Yet even in the frustration and isolation of his last years, Goya produced some of his greatest work. How else to describe Self-Portrait with Doctor Arrieta, from 1820? The artist, about 74, shows himself helpless during another of his near fatal illnesses, propped up by the doctor friend who ministers to him with an almost sacramental cup of medicine. The painting is a tribute to the power of medicine–the power of reason–but it’s also a pietà. The doctor’s arms encircle the artist the way the Virgin cradles the dead Christ. And like Christ, Goya would be resurrected, to live for eight more years. So this, his last self-portrait, is an image of deliverance, not despair. Even the way Goya grips the sheet, however faintly, as though clawing his way back to the world, is a sign of life.

Who else could make a painting like this–so wise, so tender, so tough? Only Goya. 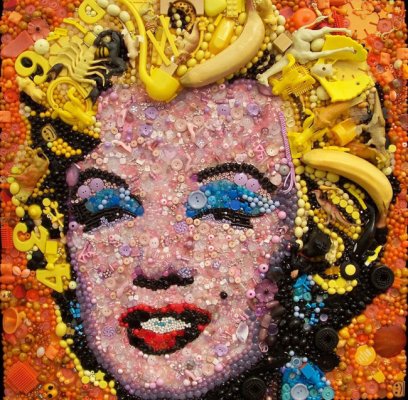 See This Incredible Colorful Art Created From Found Objects
Next Up: Editor's Pick