On Thursday, Oct. 16, — at 10:16 a.m. — the annual Great ShakeOut earthquake drill will ask people around the world to take cover for a minute, practicing what they might do in the case of a real quake. It’s estimated that more than 25 million people will participate in this year’s event, which is organized by the Southern California Earthquake Center.

This coming Friday marks the 25th anniversary of a Californian earthquake that was far from a drill.

On Oct. 17, 1989, the Loma Prieta earthquake hit the San Francisco area. A 7.1 on the Richter scale, it was the worst quake in the region since 1906’s legendary tremors. According to TIME’s coverage of the aftermath, it was the “costliest natural disaster in U.S. history” at the time, in terms of dollars. It was estimated that the earthquake would cost the area about $10 billion; the vast majority of affected homes were not covered by earthquake insurance and parts of the I-880 freeway had to be demolished. Some speculated that the residual costs of the quake would stunt the Bay Area’s growth as a financial and business region. A year later, the actual cost was adjusted down to a mere $6 billion, but many people rendered homeless by the event were still without a place to live.

Within five years, however, Loma Prieta had been matched by the 1994 Northridge earthquake in California; a year later, another major quake in Kobe, Japan, brought the topic back into the news (as on the cover of TIME, above). Though the damage from such extensive earthquakes seems like something that a simple drill can’t affect, that’s not actually the case. As TIME put it in the Jan. 30, 1995, issue:

The potential for a disastrous earthquake is no different today than it was back then — but, 25 years after Loma Prieta, millions of people are trying to do something before it’s too late. 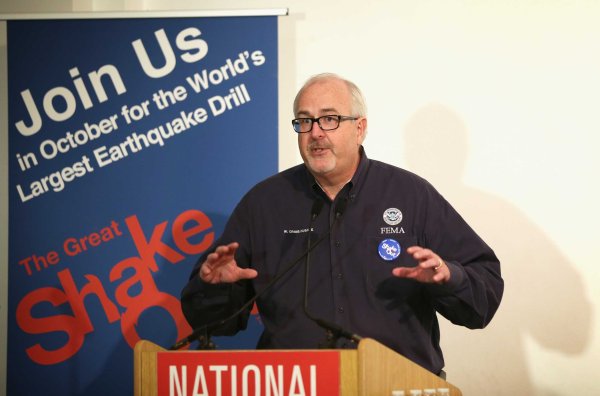 The 'Great ShakeOut' Earthquake Drill Is Today
Next Up: Editor's Pick