It's Time for Whites to Accept Responsibility for Racist Systems

Clergy members lead hundreds of protestors march from Wellspring Church to the Ferguson police station in an act of civil disobedience on October 13, 2014 in Ferguson, Missouri.
Anadolu Agency—Getty Images
Ideas
By Jim Wallis
Reverend Jim Wallis is the founder and president of Sojourners and the author of America’s Original Sin.

I and many other faith leaders came to Ferguson, Missouri, on Sunday and Monday because of Michael Brown—an 18-year-old black teenager who, though unarmed, was shot and killed by a white police officer on August 9. My first thoughts when I heard the news were about my 16-year-old son Luke. I knew how unlikely it would be that this would ever happen to my white son in America.

Coming to Ferguson was about Michael Brown. But Ferguson has also become a parable for our nation. Jesus often told parables. A parable is just a story, but often one with a simple but important point.

The Ferguson parable is simply this: black lives in America are worth less than white lives—especially in our criminal justice system. And the parable of Ferguson rings true around the nation, with the many young black men who were and have been assaulted, shot and killed before and after Michael Brown.

The big question for us is, how long will we accept the unacceptable? When will we decide to right this unacceptable wrong? I believe that is a question for parents, and for white parents in particular. How long will white parents accept the fact that the lives of children of black parents’ are worth less in our police and criminal justice systems than the lives of white sons and daughters?

Black parents are friends we meet through our children’s schools, colleagues in our workplaces, and the moms and dads we sit with at baseball and soccer games. Black parents are our brothers and sisters in Christ if we call ourselves Christians. So let’s be honest. If white Christians in America were willing to act more Christian that white when it comes to race, black parents would be less fearful for their children.

Every black parent I know or have ever spoken to has “The Talk” with their sons and daughters. “The Talk” is a conversation about how to behave and not to behave–“keep your hands open and out in front of you, shut your mouth, be respectful, say sir”–when you find yourself in the presence of a white policeman with a gun. But white parents don’t have to have this talk with their kids. That’s a radical difference between the experiences of black and white parents in America. How can we continue to accept that? Ferguson must be a moral wake-up call to white parents, not just another warning to black parents. That’s why I went to Ferguson this weekend and why I got arrested.

As a Little League baseball coach, I know that all the black parents of kids I have coached have had “The Talk,” while none of the white parents have had such conversations with their children. And most white parents haven’t got a clue that those talks are going on between their son’s black teammates and his parents. So what does it really mean to be teammates?

As Nicholas Kristof said in his Sunday New York Times column: “The greatest problem is not with flat-out white racists, but rather with the far larger number of Americans who believe intellectually in racial equality but are quietly oblivious to injustice around them. Too many whites unquestioningly accept a system that disproportionately punishes blacks… We are not racists, but we accept a system that acts in racist ways.”

Let me add a tougher conclusion. To my white brothers and sisters: you can’t continue to say you are not racist when you continue to accept and support systems that are. It’s time for white people to take responsibility for our acceptance of racist systems.

These conversations will make people uncomfortable, and they should. I want to ask white parents to ask their black parent friends about “The Talk.” Ask them if they have had the talk with their sons. What did they say? What did their son say? How did it feel for them to have that conversation with their son? What’s it like not to be able to trust law enforcement in their own community?

Jim Wallis is president of Sojourners. His book, The UnCommon Good is available in stores. 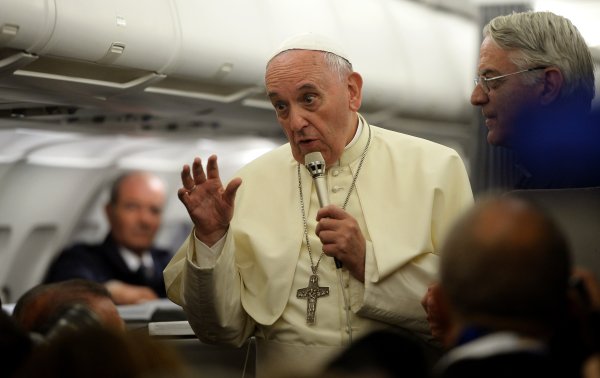