An ambulance carrying Amber Vinson, the second health care worker to be diagnosed with Ebola in Texas, arrives at Emory University Hospital on Oct. 15, 2014 in Atlanta.
David Tulis—AP
By Alexandra Sifferlin

The Texas health care worker who tested positive for Ebola late Tuesday flew on a plane just a day before she reported a fever, officials said Wednesday, as the third diagnosis of the deadly disease in the U.S. stoked fear in travelers across the country and sent officials scrambling to make sure it doesn’t spread further.

President Barack Obama rescheduled a planned trip Wednesday to campaign for Democrats before November’s midterm elections to focus on the Ebola response. He met with Cabinet and Homeland Security officials at the White House on Wednesday afternoon, and the Administration announced later that the President would also reschedule campaign travel that had been set for Thursday because of the crisis.

“We are taking this very seriously at the highest levels of government,” Obama told reporters after meeting with officials managing the response. “And we are going to be able to manage this particular situation, but we have to look to the future.” He promised that the Centers for Disease Control and Prevention (CDC) would deploy an Ebola “SWAT team” wherever needed “as soon as a new case is diagnosed,” and health officials would be “monitoring, supervising, and overseeing” the efforts to fight the virus “in a more aggressive way.”

The revelation Wednesday that she flew Frontier Airlines on an Oct. 13 had officials working Wednesday locate and monitor 131 other people who were on the plane. Vinson was also moved Wednesday to an Atlanta hospital with experience treating the disease.

“She should not have flown on [a plane],” Dr. Tom Frieden, the CDC director, told reporters Wednesday.

It became clear late Wednesday night that Frieden was mistaken, and a CDC official confirmed the agency had actually cleared Vinson to fly. Dave Daigle, a CDC spokesman, told TIME that as officials widened the net of people who needed to be monitored, Vinson was in Ohio and the CDC told her to go back to Dallas. Her temperature was 99.5°F, Daigle said. “Most doctors would call that a slight temperature, not a fever,” he said. “At that point, she was asked by CDC to come back to Dallas so she could be monitored, and she came back.”

Addressing Frieden’s comments that Vinson “should not have flown,” Daigle said the threshold for a fever is 100.4°F. “We may end up lowering that threshold,” he said, “but under the current guidance, she was clear to fly.”

Vinson was stable condition Wednesday, Frieden said. She was transferred to Atlanta’s Emory University Hospital, which has already sent nurses to Dallas to aid in Ebola-related care, is currently treating another patient who was diagnosed in West Africa and successfully treated missionaries Dr. Kent Brantly and Nancy Writebol for the disease. The hospital has a specialized unit and team that are trained to treat patients with diseases like Ebola, and Vinson’s transfer comes as U.S. officials are considering transferring all Ebola patients to specialized hospitals.

The news clearly had travelers on edge, with reports of people at airports across the country wearing face masks and even makeshift hazmat suits. Meanwhile, the World Health Organization said Wednesday that the epidemic, which has ravaged counties in West Africa, has now claimed 4,493 lives, with a total of 8,997 confirmed, probable and suspected cases.

Vinson was isolated within 90 minutes after reporting a fever on Tuesday, whereupon she was tested for Ebola, Dallas County Judge Clay Jenkins told reporters Wednesday, adding that “the protocol to find the virus worked well.” The results came back positive from a state lab in Austin around midnight, the Texas Department of State Health Services said.

The CDC is reaching out to passengers on Vinson’s plane, Frontier Airlines Flight 1143 from Cleveland to Dallas/Fort Worth. There were 132 passengers on the flight, and the CDC is asking those passengers to call 1-800-CDC-INFO. Public-health workers will begin interviewing the passengers later Wednesday. Any passengers determined to be at risk will be monitored.

Frontier Airlines said the plane on which the patient flew was cleaned after landing as part of its normal procedure and according to CDC guidelines “prior to returning to service the next day.” The plane was again cleaned Tuesday night before being taken out of service upon notification of the passenger’s status by the CDC. The airline said it will continue to work closely with the CDC to ensure proper protocols and procedures continue to be followed.

READ: Why Protective Gear Sometimes Isn’t Enough in the Fight Against Ebola 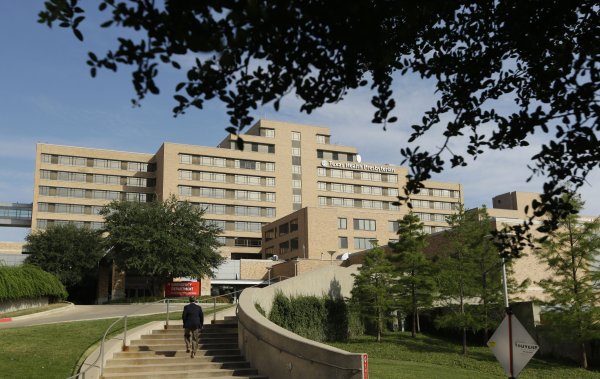 Third Ebola Diagnosis in Texas
Next Up: Editor's Pick