Pope Francis gives a press conference as he flies back to Rome from Tirana, on September 21, 2014.
Filippo Moneforte—AFP/Getty Images
Ideas
By Francis Rooney
Francis Rooney served as U.S. Ambassador to the Holy See under George W. Bush from 2005 to 2008, and is author of the book, The Global Vatican.

The pope’s recent visit to Albania to emphasize the successful inter-religious coalition government there marked another important expression of the Holy See’s “soft power” diplomacy at work in the global confrontation of radical elements within Islam. He took this opportunity to highlight a situation in which Muslims, Orthodox Christians and Roman Catholics co-exist and govern peacefully in the birthplace of Mother Teresa.

In his speech at the presidential palace, Pope Francis remarked on the “peaceful coexistence and collaboration” and “climate of mutual respect” among different religious groups in Albania, formerly one of the harshest communist regimes. This stands in stark contrast to what is taking place in Iraq and Syria right now. There, he said, religion is being used as a “shield” to support “violence and repression.”

These words bring to mind Pope Benedict’s address at Regensburg in September 2006, whereupon he delivered the most clear and striking critique of radicalized Islam and the use of religion as an excuse for violence and mayhem. Pope Francis is in some ways picking up where Pope Benedict left off, drawing the Holy See directly into the global search for solutions to radicalized Islam and religiously inspired terrorism. He is using the “soft power” voice of the Holy See and its moral authority in the world to leverage and support the efforts of other like-minded nations around the globe.

It has now been announced that Pope Francis will make a state visit to Turkey in November. As with Pope Benedict’s visit there in 2006, a papal visit to the secular Islamic nation will garner the attention of everyone who is concerned about the violence and civil wars in the Middle East. Like the Albania visit, the Pope’s very presence will symbolize hopes for genuine religious tolerance and inter-religious dialogue, while drawing the clear distinction between religion and lawlessness and murder.

Following Regensburg, several groups of Islamic scholars acknowledged that Koranic teaching must reconcile with modernity. Pope Francis’ engagement of the Holy See, both in calling for an end to the persecution of Christians and implying recently that even military opposition to ISIS in Iraq and Syria could be supported a “just war,” has similarly brought constructive results. Consistent with the need for a broad “community of nations” to justify a military response, Secretary John Kerry has worked hard to bring the countries nearest to the conflict, especially Saudi Arabia, the Emirates, Egypt and Turkey, into a coalition.

In recent weeks, Grand Mufti Abdul-Aziz, the leading Muslim cleric in Saudi Arabia, spoke out clearly against radicalism in response to King Abdullah’s public request for all clerics to raise their voices on this issue. While King Abdullah visited Pope Benedict in the aftermath of Regensburg, this is the most clear expression of Saudi opposition to radicalism to date.

On September 10, some two dozen MuslimAmerican leaders met in Washington with officials from the Department of Homeland Security and spoke out against Islamic terrorism and the recruitment of young Muslim Americans to extremism. More recently, in a direct reference to the need for “soft power” solutions, the Minister of Religious Affairs for Jordan, Hayil Abdelhafeez Dawoud, told the Wall Street Journal that “to fight terrorism, we need to fight its ideology. It can’t be solved militarily.”

George Weigel has recently summarized the problem and suggested a solution, stating that the modern world is at a crossroads with Islam, which requires that Islam reconcile its theology with the tolerance, freedom and respect for human life that the rest of the civilized world has come to expect, as well as with the nature of the secular, modern state and its relationship to religion.

While optimism is hard to find right now, and the violence and persecution in the Middle East and parts of Sub-Saharan Africa continue unchecked, these recent expressions offer promise that a broad community of nations will congeal to create a supportable, “just” force against Islamic extremists and that the Muslim states and leaders themselves will work to devise theological and philosophical constructions to bring Islam at large into accord with the modern world.

No sovereign is more aligned with these efforts nor more suited to weigh in diplomatically than the Holy See and Pope Francis.

Francis Rooney served as U.S. Ambassador to the Holy See under George W. Bush from 2005 to 2008, and is author of the book, The Global Vatican. 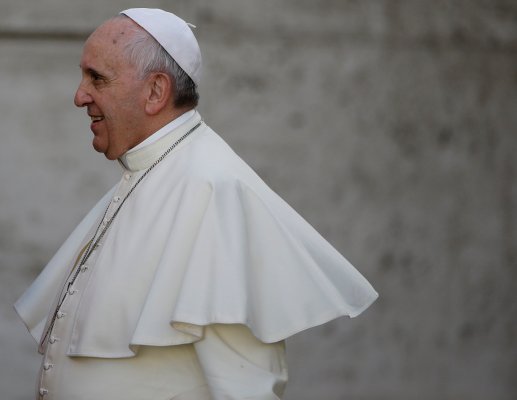 The Bishops Are Catching Up To Pope Francis on Gay Rights
Next Up: Editor's Pick