Turkey Decides to Hit Kurdish Rebels Instead of ISIS

Turkish fighter jets pounded positions held by the Kurdistan Workers’ Party (PKK) in the country’s southeast Monday, according to Turkish media reports, adding to the deadly fallout from the war raging in neighboring Syria and bringing a 2-year-long peace process to the verge of collapse.

The airstrikes by F-4 and F-16 jets took place after a military outpost near the Iraqi border came under PKK fire for three consecutive days, local news sources said. “In an immediate response, the terrorists were silenced through the military means available,” said a statement posted on the Turkish Armed Forces website.

The airstrikes were the first since a ceasefire took hold in March 2013, the result of peace talks between the Turkish government and the Kurdish rebels. The PKK and the Turkish army have waged war for thirty years over Kurdish demands for greater autonomy, at a cost of more than 30,000 lives.

Tensions between the two sides have simmered over the past few months as the peace process appeared to stall, but came to a head last week after Islamic State of Iraq and Greater Syria (ISIS) forces tightened their stranglehold over Kobani, a Kurdish enclave in northern Syria within sight of Turkish troops massed on the other side of the border.

In the wake of the violence, the PKK’s leadership announced that its militant forces, who partially withdrew from Turkey under the terms of the 2013 ceasefire, were now poised to return. “Because Turkey has continued to pursue its policies without any changes, we have sent back all our fighters that were pulled out of Turkey,” Cemil Bayik, a senior PKK commander, told a German news channel in an interview aired Friday. The group’s imprisoned leader, Abdullah Ocalan, warned earlier that the peace process would be as good as dead if Kobani was to fall to ISIS.

The People’s Protection Units (YPG), the outgunned PKK offshoot defending the city, has repeatedly asked the Ankara government to open the border with Kobani to Kurdish fighters from Turkey and Syria, as well as to heavy weapons needed to destroy the jihadists’ Humvees and tanks.

Turkish officials have allowed more than 180,000 refugees from Kobani to cross into Turkey, but insist on preventing volunteers from going in the other direction. “Turkey cannot actually give weapons [to] civilians and ask [them] to go back to fight with terrorist groups,” foreign minister Mevlut Cavusoglu said in an interview Saturday. “Sending civilians to the war is a crime.”

Turkey has also refused to consider pleas to take armed action against ISIS in Syria. “Turkey will not embark on an adventure at the insistence of some countries unless the international community does what is necessary and introduces an integrated strategy,” Prime Minister Ahmet Davutoglu said Tuesday. Before ousting ISIS, he said, the U.S. and its allies ought to commit themselves to removing Bashar al Assad’s regime in Damascus.

Officials in Ankara denied reports that they had allowed the U.S. to use Turkish air bases, including Incirlik, a key installation within 100 miles of the Syrian border, to launch attacks against ISIS. “We are holding intense negotiations with our allies. But there are not any new developments about Incirlik,” Bulent Arinc, the deputy minister said Monday.

Turkey appears yet to decide which of its enemies, the Kurdish militants or the jihadists, might be the lesser of two evils. “For Turkey, the PKK and ISIS are the same,” President Recep Tayyip Erdogan said last week. “We need to deal with them jointly.”

But the airstrikes seem to give a more definitive answer. The bombardment of Kurdish rebels, says Cengiz Candar, a veteran columnist with Turkish newspaper Radikal, can be considered a “political statement” as the peace process begins to fall apart.

“To [PKK leader] Ocalan, it says that nothing is for certain when it comes to the future of the peace process, so keep on board, behave, and don’t raise the bar too high,” he says. “And to the U.S. and other coalition members, it says that the PKK is still a priority for us, and not ISIS, as much as you’d want it to be otherwise.” 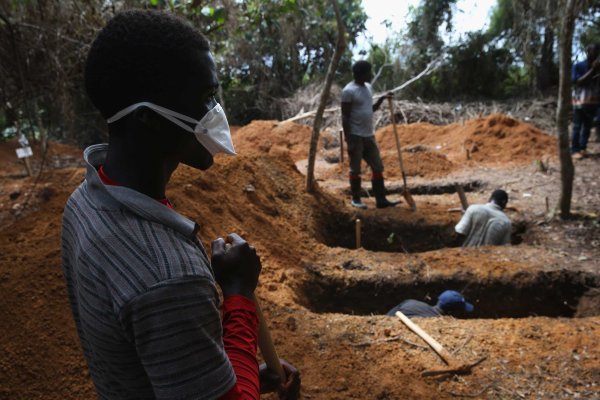 Blocked From Pope's Synod By Ebola, Liberia's Bishop Tells His Nation's Story
Next Up: Editor's Pick