There’s nothing like the original. Christina Aguilera, one of the inaugural coaches on NBC’s The Voice, is to return to the show next season following a maternity leave, replacing substitute judge Gwen Stefani. Pharrell Williams is to remain in place as a judge following the departure of Cee Lo Green.

It’s a boon for Aguilera, since a (rotating) seat at the table is a powerful promotional opportunity for any artist; it’s helped Williams, already famous for songs like “Happy,” become better known as a personality, and has further vitalized the careers of fellow coaches Blake Shelton and Adam Levine. But Shelton and Levine’s act was scaled for a reality show. The two of them seem, for all their success and recording-industry experience, like pals that might very well come over for a beer. Something has never quite connected with Aguilera, who in her early years on the show was better known for baroque costumes than for a “likable” personality. Aguilera, pouting and vamping as her co-stars tossed jokes over her head, failed to do what Jennifer Lopez, a female pop star as iconic as Aguilera herself, had managed on American Idol — to seem approachable.

There’s great camp value in Aguilera’s self-consciousness as she fans herself or purses her lips in response in reply to a performance; she has the awareness of the camera’s gaze that befits a pop star who’s been making hits since she was a teen. But her fun staginess isn’t in line with the chill, lo-fi characteristics that tend to make a relatable star. Perhaps that’s why, unlike Shelton and Levine, Aguilera’s been unable to convert her time on a huge hit show into commercial success; she’d previously taken a season off, in 2013, to promote her album Lotus, widely perceived as a commercial failure.

Aguilera has always been a bizarre fit for a show whose very conceit is that vocal performance is more important than image. The pop star’s own performances on the show (contestants aside, the coaches are and always have been the stars of The Voice) were competent if poorly judged in just how much she deployed her signature melisma. They were also reliant on costuming and weird spectacle to the point of incoherence. Aguilera’s Voice performances, like her duet with Lady Gaga, suffer from a labored-over diva act that runs entirely counter to the earthiness and humility of the aspirant singers on The Voice. Perhaps her time away will have brought her back to earth. 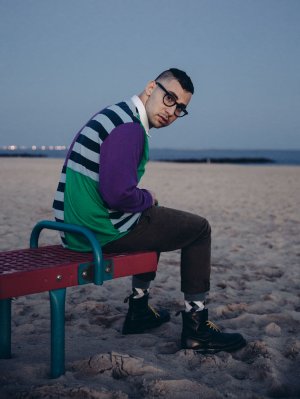 'Out of the Woods' Co-Writer Jack Antonoff Talks Working with Taylor Swift
Next Up: Editor's Pick