Why The Walking Dead Is So Brutal — and So Popular

They just keep coming, more and more, as if rising from the very earth. Not zombies–Walking Dead viewers.

The season premiere of the, um, staggeringly popular horror drama set a new viewing record, once again: 17.3 million viewers, before we even count up DVR recordings and encores (which brought its viewership up to 28 million last season). 2.5 million more adults under 50 watched it than Sunday-night football. It may end the week the most-watched series on TV, period.

In other words: what is arguably TV’s most relentlessly disturbing and violent drama is also arguably its most popular. Extreme is the new mainstream.

It’s not as if we’ve never seen a popular horror show before. Scary stories are ingrained in our culture. The Walking Dead, though, is not just gory. It’s grim–unrelentingly, punishingly (which is not to say unentertainingly) grim. It kills beloved characters; it kills children; it gives very little reason to hope that, in the long run, any human will end up anything but a walker or meat for walkers.

And as the season 5 premiere proved, it’s morally and philosophically punishing too. When our band of survivors fought their way out of Terminus, “No Sanctuary” didn’t just give you the thrill of seeing them defeat cannibalistic monsters. It showed that those cannibals were themselves survivors, once an idealistic band who were taken captive, brutalized and systemically raped after they trusted the wrong group of refugees. The Walking Dead–TV’s most popular show by many measures–had you cheer for an escape, then revealed it as the final, if forgivable, act in an unspeakable tragedy.

It used to be, in TV, that you had mainstream entertainment and then you had edgy entertainment. Mainstream hits, generally, offered familiarity and security. They might be about terrible things–crime, or even, like M*A*S*H, war–but they would leave the audience with something to feel good about: warmth or hope or laughs. It might be violent, but good would prevail over evil, love over despair, and so on. Deep, dark, disturbing downers were a niche product at best.

The Walking Dead, on the other hand, is a nightmare–which millions of people want to visit every week. So what gives? I see a few factors:

* Nothing is really mainstream anymore. You have to look at any ratings story today in the context of shrinking audiences generally. With more entertainment choices, nothing gets as many viewers now: excepting the Super Bowl, the biggest shows today don’t get what American Idol did 10 years ago, or, hell, even a mediocre success 20 years ago. The number-one show the week ending Oct. 5, NCIS, had an 11.8 rating (almost 19 million viewers)–a figure that, in the 1994-95 season, would have put it in a solid 29th place. There are no monster hits that everyone watches now, so a huge hit among a certain group can top everything. And in that regard…

* The youngs love their zombies! If The Walking Dead is a surprisingly big hit overall, in viewers under 50–also known as the chief reason advertisers pay money for ads–it is stupendous. Among those viewers, New York magazine’s Joe Adalian notes, it had almost double the rating of the next-highest-rated scripted show last week, CBS’s The Big Bang Theory. It’s huge enough in the youth vote to top everything in an era of lower ratings. But it’s not just the young, because…

* America loves dark. Yes, The Walking Dead may have the most video-game splatter of anything on TV. But all those CBS dramas with their audiences, um, of a certain age? They’re murder central, and not quaint Angela Lansbury-style mysteries but–in shows like Criminal Minds and Stalker–truly ugly stories of sadistic, often sexually charged violence that imply we all live in a sick, sad world filled with predators. Gone are the days when Grandma and Grandpa warmed up with wholesome entertainments like The Waltons; family dramas like Parenthood are essentially niche entertainments now. After all…

* These are dark times. Look, I resist over-psychoanalyzing the American public on the basis of one hit TV show or two. I don’t think that “the zeitgeist” anticipated years ago that, say, there would be an ebola outbreak in 2014 and prepared The Walking Dead to resonate with it. But: if there is no such thing as a time without bad news, there’s a specific cast to the bad news of today. Often, it’s about systemic collapse, or the threat of it: pandemics, global financial crises, climate change and rising sea levels, the threat of mass-casualty terrorist events. In one way or another, we’re constantly asked to envision how we and our own would thrive if everything went to hell and we lost all our societal supports. It’s disturbing; in some way it all comes down to generating fear by selling fear. But it does sell. In the same way that cop shows like Starsky and Hutch or SWAT let viewers vicariously experience urban crime in the 1970s, an apocalyptic drama lets us face the end of the world once a week and live. But not just any apocalyptic drama, because…

* Authenticity pays off. If it were as easy as slapping up one end-of-the-world drama after another–and TV has done that lately–the Nielsen top 10 would be full of apocalypse serials and Revolution would be enjoying a long life on NBC. But a lot of these efforts, especially on broadcast networks, have felt sanitized and tentative. I haven’t always loved The Walking Dead as a drama–its characters can be one-note, and its ambitions as a character drama can get lost amid the kill-quotient-of-the-week. But I will say this for it: it freaking commits. It’s dedicated to showing the raw implications of its premise, right down to the splattering of heads and gobbling of guts. (See also its fellow cable hit, Game of Thrones.) Sure, it allows us the distance of knowing that most of its “kills” are walkers, who are already dead; but its living suffer too, often horribly.

And that matters in an era where entertainment is no longer massaged to be palatable to audiences of every age and taste, as it was in the three-channel days of the 20th century. In a niche-ified era, every niche can be more, and more extremely, itself. If I can see unvarnished darkness in the world of video games, or movies, or novels, I expect to be able to see it in TV too.

It was, maybe, another dark, brutal, popular cable drama–Breaking Bad–that put this modern mindset best. In an age of extremes, no one wants to settle for half-measures.

Read next: Everything You Need to Know Before Season 5 of The Walking Dead 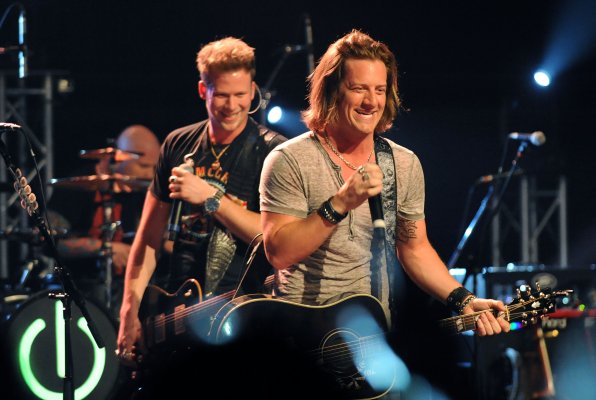 'Bro Country' Is Still Thriving, Even If Everyone Hates It
Next Up: Editor's Pick