One bishop is absent from Pope Francis’ Extraordinary Synod of the Bishops on the family. He was invited, he wanted to come, his name is on the participant list, but he is not in Rome. He is some 4,000 miles away. And few—if any—people outside the synod hall even know he is not there.

His name is Bishop Anthony Borwah, 48, and he leads the Catholic Diocese of GBarnga in central Liberia, where Ebola is wreaking havoc. Tony, as he is called, learned he could not travel to the Synod in late August, when the Ivory Coast closed its borders due to the Ebola outbreak and restricted the one airline that could have taken him to Abidjan, where he needed to apply in person for a Schengen visa to travel to the European Union.

Borwah may not be at the Synod, nor is he able to participate remotely due to technological limits, but the gathering’s focus on the family is vital to his Liberian families. Ebola is their most urgent challenge, but it is not the only one, he explained to TIME in this exclusive interview. Borwah submitted an essay to the Synod—an “intervention” in Vatican-speak—about the situations facing Liberian families. Borwah’s essay is not being read aloud at the Synod but will be entered into the written record and considered in any final documents that the Synod produces.

“Enormous are the pastoral challenges of the family in Liberia today,” his essay begins, before continuing to describe the challenges including Ebola, polygamy, migration, unemployment, the lack of a father-figures, domestic violence, child trafficking, and sexual tourism. “Existential questions from the poor, prevalently during the Civil war, are been asked again: Where is God? What wrong have we (Liberians) done again? How come we have once again become the abandoned and scum of the earth?”

The past few months since Ebola outbreak have been brutal for Liberia, where about 69% of the population is Christian, according to Pew Research Center. Borwah has lost dear friends to the virus, including his spiritual director, Father Miguel from Spain, his mentor and medical doctor Abraham Borbor, and his prayer partner Tidi Dogba. While the Catholic community as a whole has not had many deaths in Gbarnga, he says, those who are dying are relatives and friends. “As Bishop of my people I carry within my heart their wounds and pains every moment of life here,” he says.

The Liberian Catholic community is doing what it can to combat the virus. Borwah has called on all Catholics in his diocese to gather in prayer against Ebola from 5 to 6 p.m. every day from September 1 through November 30. The church uses the first ten minutes for education and updates about Ebola, and then for the last 50 minutes they pray with the Holy Rosary. They are observing strict medical rules about what kind of interaction they can have while together for prayer. No touching, no handshakes, and entrances of churches, homes, and offices have buckets of chlorinated water for hand washing.

The Catholic Church is also collaborating with the government on the national Ebola Task Force Team, Borwah says. The National Catholic Health Team is training nurses in three Catholic dioceses in Liberia, and Catholic clinics remain open. “Our Human Rights Department is also actively involved in violations issue[s] that may occur under such a crisis situation and the state of emergency when rights are restricted,” Borwah adds. “We hope to soon begin the distribution of food to mainly quarantined communities and other affected areas.”

The Ebola devastation extends beyond just a health crisis for Liberian families. The virus’ highly contagious nature means that family members are kept at a great distance from infected loved ones. Ignoring the restriction, on the other hand, can lead to death, but Liberian families are very affectionate especially in difficult times, Borwah explains, and the inability to show real human kindness is wounding morale.

Poverty is also increasing, he says. Already more than 80% of families in Liberia live below the poverty line, according to the Central Intelligence Agency. Now the price of rice and other essential commodities has spiked since the ebola outbreak due to port and border closures, according to the Food and Agriculture Organization of the United Nations (FAO). Labor shortages due to migration restrictions are also putting the fall’s rice and maize harvests at risk. Women, the FAO has noted, are particularly hard hit as many are the primary caregivers and can’t repay their small business loans. Schools are closed while the virus is present, and so students stay home and teachers do not get paid. “The Ebola situation has badly crippled the economy resulting in rife impoverishment and hunger,” Borwah says.

Increased poverty means increased desperation over the loss of family members to Ebola, he continues. That frustration is compounded when the government buries or cremates loved ones, often without family members present. “These new wounds are a tragic addition to festering wounds that families here experienced as a result of a more than 15 years of fratricidal civil war that officially ended a decade ago,” he says.

Borwah is grateful for global aid groups and donors like Catholic Relief Services and CAFOD, the official Catholic aid agency for England and Wales, but more support is needed, especially when it comes to supporting survivors. “Recently one of the survivors—my kinsman—committed suicide when people avoided him and he felt that he was unworthy of love anymore,” Borwah says. “We need more support to feed the thousand whom are hungry and angry and to care and counsel the Ebola survivors who carry the stigma.”

There is a dimension to the Ebola outbreak that also concerns him—the idea that Ebola’s spread could have a man-made and not just a natural source. “I believe that the causes of Ebola are not just physical but spiritual,” he says. “I like calling it the ‘Ebola phenomenon’ because it’s existence raises more questions than answers.”

Then there are Liberia’s non-Ebola-related challenges. Infidelity in marriages is common, with the causes ranging from poverty (mostly on the part of the women) and cultural permissiveness (on the part of the men), he says. “Generally the economy of the nation is in the pocket of few men, hence there is a lot of women prostitution,” he says. “I often say that these prostitutes are prophets and friends of Jesus as they signify the inequality, marginalization and injustice meted out against the poor and nobodies of our society especially women.”

Women, he adds, are generally subject to men culturally, and are often subjected to brutal domestic violence and impoverishment. The government of President Ellen Johnson Sirleaf has done a lot to raise the dignity of womanhood in beloved Liberia, he continues, but “the walk is still too long.”

Families are navigating questions of shifting identity. Western technological and cultural shifts mean that young people often have different value systems from their parents, and that is dividing families. “Parents can no longer control their children in the face of this new ethics, something, which brings a lot of pain and worries about the future of the family,” he says.

Borwah has a message for the world: “The friends of Jesus Christ—the nobodies, the poor, women and the innocents, the caretakers of others—need both the spiritual and material help. They are losing faith, hope and love. They are poorer, hungrier and very desperate. God has not and will not abandon us, so please do not abandon us to the onslaught of Ebola.”

And, in the midst of it all, Pope Francis, Borwah says, has not forgotten the Liberian people. “The Holy Father prays for Ebola stricken people everyday, even as the Synod goes on,” Borwah says. “He is very close to our suffering.”

His final words: “Please pray for us.” 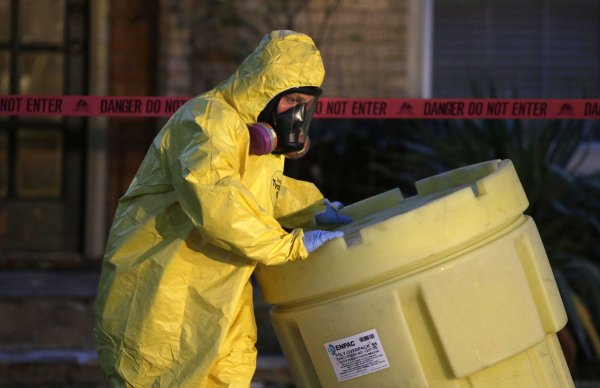 Ebola Lessons We Need To Learn From Dallas
Next Up: Editor's Pick