Why U.S. Sanctions Mean Some Countries Don't Get Any iPhones

An attendee displays the new Apple Inc. iPhone 6, left, and iPhone 6 Plus for a photograph after a product announcement at Flint Center in Cupertino, California, U.S., on Tuesday, Sept. 9, 2014.
Bloomberg via Getty Images
By Jack Linshi

Some 36 additional countries will receive shipments of Apple’s iPhone 6 this month, with over 115 countries on track to get the big-screen smartphones by the end of the year. But a handful of countries won’t be receiving any Apple products at all.

Among the Apple-less countries are Syria, North Korea, Sudan and Cuba, which face trade sanctions from the United States. That means the “exportation, reexportation, sale or supply” of any Apple goods from the U.S. or an American anywhere is prohibited in those countries, according to Apple’s global trade compliance. Add to those Apple-less countries several African and Middle Eastern nations, among other countries, which Apple’s sales locator indicates have neither Apple Stores nor authorized Apple product resellers.

Apple did not respond for comment on whether authorized distribution channels exist in countries that aren’t sanctioned by the U.S. but still present a difficult business climate, like Ethiopia, Afghanistan and Yemen. Technology and trade experts were reluctant to speculate why Apple may not penetrate these markets, but some pointed to a lack of demand or infrastructure.

In the map below, Apple-less countries appear unshaded:

The world recently bore witness to what happened when China, not subject to U.S. sanctions, was deprived of the iPhone 6’s initial release: a gray market exploded while rumors swirled that the “Chinese mafia” was storming Apple Stores around the world to collect iPhones for resell to high-income buyers.

That same grey market boom is happening in countries that do face U.S. sanctions, though for different reasons. While Chinese buyers were simply unwilling to wait for the iPhone 6’s official release in their home country, high-income buyers in sanctioned states are creating demand for a product that will likely never be sold in their country. That demand is being met by unofficial providers like the “Apple Syria Store” and “Tehran Apple Store,” two unofficial Apple distribution channels in the Middle East, for example.

A lack of iPhones in some countries, however, is only a problem for those countries’ wealthiest residents. Indeed, the iPhone craze overshadows a higher-stake battle: Access to less-hyped but important American technology in countries where such technology continues to be restricted.

The U.S. has put in place sanctions against Syria, North Korea, Sudan, Cuba and Iran to discourage those countries from abusing human rights, sponsoring terrorism or launching nuclear programs. While the sanctions were largely intended as economic embargoes, they also disrupted the free flow of information by severely limiting residents’ access to communication technology, advocates say. That technology includes not only electronics like Apple’s iPhone, but also American software and websites like Apple’s App Store, Adobe Flash, Yahoo e-mail and educational platforms like Khan Academy and Coursera. In many sanctioned countries, attempts to access those sites result in a “blocked” page. In certain countries it’s also prohibited to update whatever American software is available, leaving in place security vulnerabilities in countries where surveillance and censorship are commonplace.

“It’s still a fairly new issue, because it wasn’t really until the Arab Spring that people started to realize communication technology as a tools of free expression,” said Danielle Kehl, a tech policy analyst at the New America Foundation’s Open Technology Institute.

Observers first began to note the impact of U.S. sanctions on communication technology during Iran’s Green Movement in 2009, when protesters demanding the president’s removal used the Internet as an activist tool, according to independent tech policy researcher Collin Anderson. Within years, activists won over U.S. officials, who exempted certain technologies from American sanctions on Iran to empower protestors. That hasn’t yet been replicated in other sanctioned countries.

Anderson also said that pressure from the Iranian diaspora contributed to a decision by U.S. officials to issue a sanction exemption that allowed the export or re-export of “certain services, software, and hardware incident to personal communications” to Iranians. Apple then “quietly updated its compliance policy” to match the change, Anderson said.

“Apple is in an under-appreciated way one of the most responsive adopters of U.S. policies [that lift sanctions on technology],” said Anderson.

Apple had some market incentive to comply quickly with the change. Most of these sanctioned countries have significant amounts of mobile phone subscribers buying devices purchased from non-U.S. countries or companies, according to Anderson and data from the International Telecommunications Union.

Despite all those potential customers for Apple and other tech firms, tech policy analysts agreed the onus is on U.S. officials to invoke change. But that Apple and several other companies chose to engage with complex, high-risk sanctions in Iran shows that when the policies change, companies tend follow suit.

Still, Kehl said the other, risk-averse option for companies is to “over-comply” with Iranian sanctions, or to treat the laws as if they were complete embargoes in order to reduce their liability. That’s what happened in 2009 when LinkedIn blocked Syrian accounts and when Google blocked its code.google.com developer’s tool in Sudan.

Even Apple appeared to over-comply in 2012 when a Apple Store employee in Alpharetta, Georgia refused to sell an iPad to Iranian-American woman after he heard the woman speaking Persian, according to Jamal Abdi, policy director at the National Iranian American Council. “If [Apple] had reason to believe you were going to take an Apple product to Iran, or if you were going to resell it, [Apple] had to take action to stop people,” explained Abdi, who slammed the practice as discriminatory in a New York Times op-ed. The woman later received an apology from an Apple customer service employee, as NPR noted at the time.

The greatest pressure for change, however, is coming from within the sanctioned countries. Iranian bloggers have discussed banned technologies at risking of criminal charges, Sudanese computer science students have demanded more educational tools, and Syrians have called for U.S. imports of basic technological needs. Several non-profits have reported that sanctioning U.S. technology is highly detrimental to affected countries’ growth, while Abdi added that sanctions have prevented the electronic delivery of humanitarian aid or day-to-day monetary transactions because many banks are affected.

Still, tech companies have in recent years shown more willingness to engage government officials on matter of policy, particularly after former NSA contractor Edward Snowden’s surveillance leaks. Twitter sued the U.S. Justice Department earlier this month to disclose government requests for user data, while popular websites like Netflix, Mozilla and Reddit joined an online protest against the Federal Communications Commission’s proposed rules they said could divide the Internet into “fast lanes” and “slow lanes.” In the most visible tech-backed activism to date, Wikipedia and Reddit “blacked out” their webpages and Google censored its logo to protest the Stop Online Piracy Act, which was later shelved by its author.

Analysts are not expecting Apple to be at the forefront of the battle to lift U.S. sanctions. But as several organizations and advocates pressed for changes to American trade policy towards Iran, it would be hard to believe they would turn away Apple’s support.

“[Apple] is very quiet about these things—like either Apple is the best, or maybe the worst. But it seems like it’s the best,” Anderson said. “[Apple’s] recognition of [the policy changes regarding Iran] was the first moral victory for everyone who had worked so hard on this.” 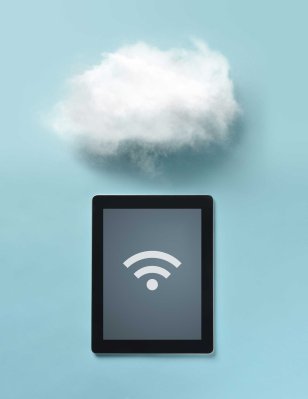