Police removed some barricades from protest sites around central Hong Kong early Monday morning, while many students still lay sleeping in tents, with skirmishes between pro- and antidemonstration groups erupting later in the afternoon.

Officers swooped in at 5:30 a.m. ostensibly to allow traffic to resume flowing around this freewheeling financial hub, large swaths of which have been paralyzed since Sept. 28 by a student-led civil-disobedience movement now dubbed Occupy Hong Kong.

Tense standoffs took place in several locations early Monday, with escalating skirmishes breaking out in the afternoon between demonstrators and those opposed to the continued disruption.

Protesters manning a barricade on Queensway Road were reportedly attacked by about 30 masked men with tattoos and dyed hair who strutted out of the local subway station brandishing knives and pliers.

Two trucks then attempted to remove barricades with an attached crane, prompting pro-democracy protesters to rush in to block it. Furious democracy activists demanded to know why the police did not defend them from the mob, but were simply ushered away.

Pro-democracy protester Gary Yeung, 25, a businessman, suffered a cut to his hand in the melee. “[Anti-Occupy demonstrators] approached us and they started cutting at the roadblock; they said, ‘We come in peace,’ but at the same time they were literally pushing people over,” he tells TIME.

“I nearly got stabbed because they were cutting through the barricade and I got cut on the finger. While this was happening, police were standing by despite people’s calls for help.”

Protest leaders have repeatedly alleged that shadowy underworld groups, like Hong Kong’s notorious triad gangs, have been used to break up the otherwise peaceful demonstrations.

Chants of “explanation” were hurled at police over their apparent unwillingness to confront the anti-Occupy mob, while still attempting to arrest individuals on the opposing side.

On Monday, Occupy Central With Love & Peace, one of the main protest organizing groups, issued a statement to condemn the perceived inaction of the police.

“We urge the police to enforce the law and prevent certain people from damaging the peaceful occupy movement, and avoid any suspicion that the government may be trying to use the masses to attack the masses,” it read. “We expect non-violence from protesters of all backgrounds.”

Pro-democracy activists began to rebuild barricades at Queensway after the afternoon clashes had subsided at around 4 p.m. They are demanding the resignation of Hong Kong’s embattled Chief Executive Leung Chun-ying, and free elections for his successor, beginning in 2017.

On Sunday, Leung gave a televised interview in which he refused to resign, decrying the protest movement as “out of control” and deeming the possibility of Beijing acquiescing to protesters’ demands for more democratic polls as “almost nil.”

A police statement Monday morning said they were working to “relieve traffic congestion” and “reduce the chance of traffic accidents,” but would not forcibly remove protesters. Barriers on the periphery of the main protest area on Hong Kong Island, and at another location across Victoria Harbor in Kowloon, were cleared, police said.

Scenes earlier in the day were tense but peaceful. On Connaught Road in Central district, over 200 officers clad in riot gear converged on some 60 protesters wearing gas masks and manning a section of barricade beside the prestigious Hong Kong Club at around 8 a.m.

Christy Ma, 19, a dance student at the Hong Kong Academy for Performing Arts, told TIME on Connaught Road that she didn’t think the police would use tear gas again after its deployment early in the protests galvanized support and brought tens of thousands more onto the streets.

“If the protest ends now it’s not really a complete success, but it has achieved something to raise people’s attention that we are not politically apathetic and we care about society,” she said, seated cross-legged in front of a mangled collection of steel fences. Unfurled umbrellas, the adopted symbol of the pro-democracy movement, were arrayed across the tops of the barricade to protect protesters from police pepper spray.

“I understand it’s not easy to take a great leap forward to have universal suffrage, but at least people start to care about it,” she added. “Even if people disagree with us at least they are now talking about it.”

A large area of central Hong Kong still remains under the control of the students, who have erected a tented village, complete with study areas, food and water stations, first-aid posts, recycling points, showers, stages and public artworks. Some protesters have even numbered their tents to make themselves easier to find.

The well-organized protest area — named Umbrella Square by the movement — has become something of a sightseeing attraction in recent days, with joggers and skateboarders passing through and tourists and families posing for photographs.

On Friday, Goldman Sachs slashed Hong Kong’s fourth-quarter gross-domestic-product (GDP) growth forecast to 2% from 2.5% because of lower than expected tourist spending due to the protests. 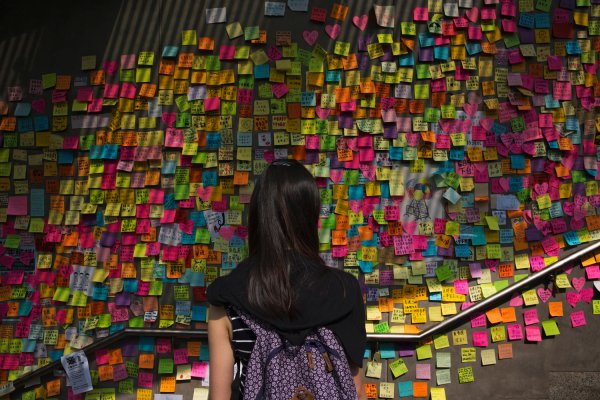 A New Generation Speaks in Hong Kong
Next Up: Editor's Pick