A Texas health worker has tested positive for Ebola after caring for an Ebola patient who died this week, officials said Sunday, marking the second diagnosis of the deadly disease in the United States.

“We don’t know what occurred, but at some point there was a breach in protocol,” Centers for Disease and Control and Prevention (CDC) director Tom Frieden said at a news conference, noting that “there is a need to enhance the protocol to make sure that they are followed.”

Following the announcement of the preliminary diagnosis by theTexas Department of State Health Services (TDSHS), the CDC later confirmed Sunday that the patient is in fact battling Ebola. The health worker is the first known case of someone contracting the deadly Ebola virus in the U.S.

“We knew a second case could be a reality, and we’ve been preparing for this possibility,” Dr. David Lakey, commissioner of the TDSHS, said in a statement. “We are broadening our team in Dallas and working with extreme diligence to prevent further spread.”

The worker, who is in stable condition and whose identity has not been made public, reportedly wore protective gear while caring for Thomas Eric Duncan at Texas Health Presbyterian Hospital, according to chief clinical officer Dr. Daniel Varga, the Associated Press reports. Duncan, the first individual in the U.S. to be diagnosed with Ebola, died on Wednesday.

Varga said the hospital is “very concerned” about the spread of the virus despite the worker’s safety precautions, which he said included “gown, glove, mask and shield.”

Frieden said that treatment of Ebola “can be done safely but it’s hard to do safely. Even a single inadvertent slip can result in contamination.”

The White House said in a statement Sunday afternoon that President Obama had been briefed on the new patient’s condition, and had directed that the CDC’s breach investigation move quickly and that “federal authorities take immediate additional steps to ensure hospitals and health care providers nationwide are prepared to follow protocols should they encounter an Ebola patient.”

Because of staffing limitations, the emergency department at the hospital is currently on “diversion” and is not allowing ambulances to deliver patients to the emergency room, the hospital said in a statement. Texas Health Resources is also monitoring all staff who cared for Duncan and “triple checking” its safety measures and compliance with CDC guidelines.

“Breaking the links in the chains of transmission is the key to preventing further spread,” Frieden said.

— With additional reporting by Zeke Miller 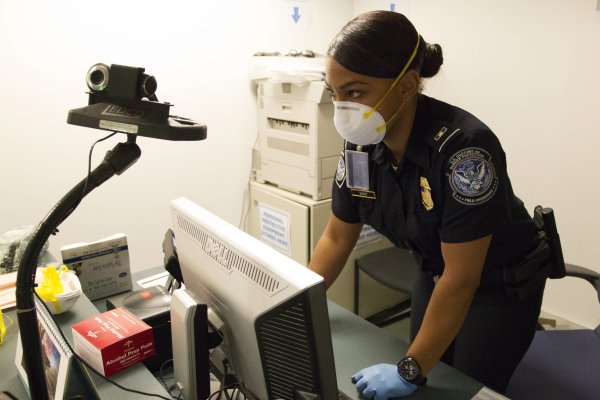