How Indigenous Peoples Day Came to Be

In 2014, when the Seattle City Council unanimously voted to recognize Indigenous Peoples’ Day as an alternative to Columbus Day, it was following in the footsteps of Minneapolis. But both cities were late to the game compared to Berkeley, Calif., which in 1992 became the first city in the country to formally recognize a new holiday challenging the idea that Christopher Columbus “discovered” America with his 1492 voyage.

Back in 1992, then-Mayor of Berkeley Loni Hancock told TIME Magazine that Columbus Day celebrations have been “Eurocentric and [have] ignored the brutal realities of the colonization of indigenous peoples.”

Later becoming a California State Senator, Hancock says she’s pleased so many other cities are catching on to Indigenous Peoples Day. (Different cities have made different choices about where to put the apostrophe after peoples, or whether to have one at all, but the idea is the same.) “Berkeley was just a little bit in front,” she told TIME in 2014, noting that Berkeley was also the first city to ban Styrofoam carry-out containers and install curb cuts to assist the disabled. “As often happens, things happen in Berkeley first and then other places pick them up.”

Talk of an alternative to Columbus Day dates back to the 1970s, but the idea came to Berkeley after the First Continental Conference on 500 Years of Indian Resistance in Quito, Ecuador, in 1990. That led to another conference among Northern Californian Native American groups, Hancock says; some attendees, along with other locals interested in Native American history, brought their concerns to the Berkeley City Council. The council appointed a task force to investigate the ideas and Columbus’ historical legacy, and in 1992 they unanimously approved the task force’s recommendation for an Indigenous Peoples Day. (Other alternatives exist in the U.S., such as Native American Day—South Dakota has recognized that holiday since 1990.)

“[Columbus] was one of the first Europeans to get to the American continent, but there was a lot of history that came after that in terms of the wiping out of native people,” Hancock says. “It just didn’t seem appropriate. It seemed like a reemphasizing of history and recognizing that to be very ethnocentric really diminishes us all.”

In addition to being an official holiday, Indigenous Peoples Day in Berkeley is celebrated with an Indian market and pow-wow that attracts Native Americans from all over the state as well as the country. “Any holiday like that says, ‘This is an important factor in our history,’ whether it’s Martin Luther King’s birthday or President’s Day,” Hancock says. “I think that it impacts the way the young people of Berkeley look at the world.”

While cities like Seattle now observe Indigenous Peoples’ Day in addition to Columbus Day, the city of Berkeley replaced Columbus Day altogether. Hancock says there was vocal opposition to change but notes that most of it came from outside of the Berkeley community. As was also the case in Seattle, some members of the Italian-American community argued that Columbus Day was an important celebration of Italian pride and heritage, and that changing the celebration was disrespectful.

“We just had to keep reiterating that that was not the purpose — the purpose was to really affirm the incredible legacy of the indigenous people who were in the North American continent long before Columbus,” Hancock says. “But I’d also suggest that most of the Italian-Americans really came to this country looking for safety and economic opportunity, and I’m sure we could find some of the Italian-Americans who stood up for that and helped make that happen. Maybe we should look into that. The Berkeley City Council, as you know, will consider many things!” 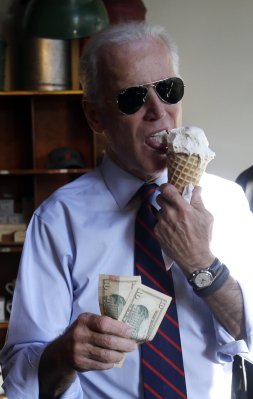 These Photos of Joe Biden Eating an Ice Cream Cone Show That His Eternal Summer Shall Not Fade
Next Up: Editor's Pick