The man who founded and ran Blackwater—the company that sent thousands of private workers into Afghanistan and Iraq—says President Barack Obama should hire a mercenary corps to fight the Islamic State of Iraq and Greater Syria.

“The American people are clearly war-fatigued,” writes Erik Prince, now the chairman of Frontier Services Group, a company that provides logistical support for much of Africa. “If the Administration cannot rally the political nerve or funding to send adequate active duty ground forces to answer the call, let the private sector finish the job.”

Some Americans might be willing to write private fighters a check (Prince himself has reportedly been linked to developing a mercenary force for the United Arab Emirates). But Blackwater—which earned more than $1 billion in Iraq—shows the dangers inherent with subcontracting out war. Its guards killed 17 civilians in Baghdad in 2007; a jury continues to deliberate the fate of four ex-employees implicated in the shooting.

One of its top officials in the Iraqi capital allegedly threatened to kill a State Department employee who had questions about its contracts with the U.S. government. And U.S. military officers routinely grumbled about the lack of “unity of command” that Blackwater’s presence in Iraq created. But that wouldn’t be a problem if there were no U.S. troops around.

Prince sold Blackwater Worldwide in 2010. The company changed its name to Xe a year before he sold it, and changed it again, to Academi, in 2011. In June, Academi merged with rival firm Triple Canopy to form Constellis Holdings, Inc. Constellis’ board includes John Ashcroft, attorney general under President George W. Bush, Bobby Ray Inman, a retired admiral and former director of the National Security Agency, and Jack Quinn, counselor to President Bill Clinton.

Prince echoes many U.S. military officers when he says “the President’s current plan seems half-hearted at best.” Air power will not be able to go into Syrian towns like Kobani—which ISIS has been fighting to take for three weeks—and root them out. The militants increasingly are taking cover among civilians, knowing that the U.S. and its allies will not obliterate buildings where innocent civilians may be mixed in among the jihadists.

“Clearing operations ultimately fall to the foot soldier,” Prince writes, but those available aren’t capable of what needs to be done. The Iraqi army “is demonstrably inept after billions spent on training and equipping them.” The Kurds—including those defending Kobani—“now find themselves outgunned, under-equipped, and overwhelmed.”

Prince, a one-time Navy SEAL, doesn’t think much of the way his old service is waging the campaign:

The U.S., he implies, could save money by contracting out the ground war he believes is needed. “The private sector has long provided nations around the world with innovative solutions to national defense problems in a variety of ways, from the kinetic to the background logistical support necessary to keep militaries humming,” he writes. “If the old Blackwater team were still together, I have high confidence that a multi-brigade-size unit of veteran American contractors or a multi-national force could be rapidly assembled and deployed to be that necessary ground combat team.”

The Pentagon could hire such personnel “for their combat skills in armor, artillery, small unit tactics, special operations, logistics, and whatever else may be needed,” he adds. “A competent professional force of volunteers would serve as the pointy end of the spear and would serve to strengthen friendly but skittish indigenous forces.”

Prince warns whatever gains the U.S. has achieved in the wars it has fought since 9/11 hang in the balance: 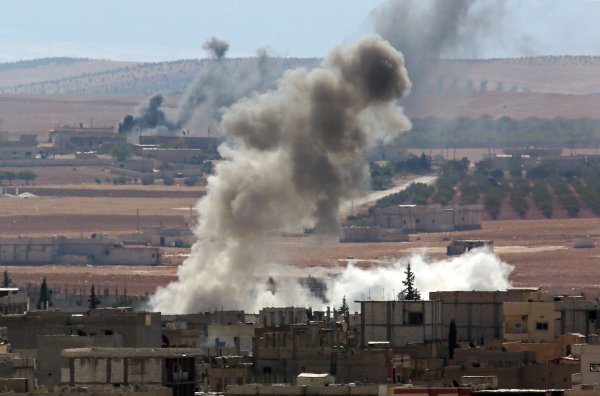 General Who Championed Air Power Challenges Pentagon on ISIS
Next Up: Editor's Pick