The Harry Potter Generation Has Been Waiting for Malala

Malala Yousafzai acknowledges the crowd at a press conference at the Library of Birmingham after being announced as a recipient of the Nobel Peace Prize on Friday.
Christopher Furlong—Getty Images
By Charlotte Alter

Everybody knows the story: A chosen child. A powerful enemy. A flash of light. A forehead with a scar.

Sound familiar? It should. Nobel Prize laureate Malala Yousafzai’s story sounds like a non-magical parallel version of the Harry Potter story. She was a persecuted child who found refuge in education. She survived a death sentence to become the most famous kid in the world. She uses that fame to fight evil and protect schools. And now that she has a Nobel Peace Prize under her belt and political aspirations in her future, Malala is poised to become the first world leader from Generation Potter.

The tale of a 17-year old Pakistani schoolgirl sharing the Nobel Peace Prize for her work on behalf of girls’ education would bring a tear to anyone’s eye. But something about her resemblance to the most beloved character in Millennial culture makes Malala especially resonant with a generation of young Westerners who were weaned on Butterbeer.

It would be glib to call Malala’s very real fight for justice and Harry Potter’s fictional quest a case of life imitating art. It’s not even clear that Malala has read the entire Harry Potter series — she recently told the New York Times that books were so scarce in Pakistan that she read only seven or eight books before she moved to England. But even if Malala herself might not have been absorbed in the world of Hogwarts (she’s a little busy, after all) the generation she represents is responsible for buying more than 450 million copies of Harry Potter books, making it the most popular book series in history. The people who hear her story have probably read Harry’s, or seen the films, and even if they don’t consciously make the connection, the subliminal echoes are there. Of TIME’s 25 Most Influential Teens of 2014, Malala has been voted most influential by far: just a few hours after the poll was launched, 54% percent of respondents said she was the most influential teen of the year, more than all other candidates combined.

Of course there’s nothing magical about Malala’s fight to educate girls, and if there were a spell against Islamic extremism, the Pentagon would have used it by now. Malala herself seems painfully aware of the lack of easy solutions, writing in I am Malala: “Once again, I prayed for a magic wand to make the Taliban disappear.” But in awarding the 2014 Peace Prize to Malala Yousafzai and Indian child-rights activist Kailash Satyarthi, the Nobel Prize Committee made a statement about the power of youth, one that Dumbledore would surely endorse. “It is a prerequisite for peaceful global development that the rights of children and young people be respected,” the committee said Friday when they announced the award. “The violation of children leads to the continuation of violence from generation to generation.”

Or, as Dumbledore put it in Harry Potter and the Half-Blood Prince: “Age is foolish and forgetful when it underestimates youth.”

Both Malala and Harry became powerful because of their enemies’ attempts to kill them. “They thought that the bullets would silence us, but they failed,” Malala said at the UN in July 2013, in her first public appearance since the Oct. 2012 shooting on her way to school. “And out of that silence came thousands of voices. The terrorists thought they would change my aims and stop my ambitions. But nothing changed in my life except this: weakness, fear and hopelessness died. Strength, power and courage was born.”

If the Taliban had read Harry Potter, they might recognize that in trying to kill Malala, they created a powerful threat. “In marking you with that scar, he did not kill you, as he intended, but gave you powers, and a future,” Dumbledore told Harry in Harry Potter and the Order of the Phoenix.

But Malala and Harry share more than their badass scars. They’re both motivated by the belief that schools cultivate the forces for good that are necessary to combat forces of evil, and that justice grows out of the classroom. Harry Potter’s quest to destroy Voldemort is also a quest to save Hogwarts. Malala’s crusade to ensure that every girl has an education is also aimed at eradicating terrorism. Both see education as the antidote to fear. (More after the jump)

The most powerful narratives are often the ones that remind us of stories we’ve heard before. That’s why Hurricanes Katrina and Sandy are compared to the floods in Noah’s Ark, the “Miracle on Ice” hockey upset at the 1980 Winter Olympics was considered a “David-and-Goliath” story, even Will and Kate’s Royal Wedding had an whiff of Cinderella to it. True stories that resemble fictional ones have a feel of mythicism to them, a blurring of the line between reality and legend that allows us to amplify our humble times into something worthy of fable. “Mythology,” wrote Joseph Campbell in his 1949 treatise The Hero With a Thousand Faces, “is psychology misread as biography, history, and cosmology.”

But when you’re just a kid, that kind of mythology can be hard to shoulder. Part of Harry Potter’s appeal comes from being just a regular 11-year old struggling to live up to the legend of the Boy Who Lived. “Famous Harry Potter,” taunted Draco Malfoy in Harry Potter and the Chamber of Secrets. “Can’t even go to a bookshop without making the front page.” Malala will surely know what that’s like. While her classmates in England may have gone to field hockey practice or to the movies after school on Friday, Malala accepted the Nobel Peace Prize.

This young woman will grow up freighted with unimaginable challenges and elevated by her uncommon courage. And like Harry, she’s proved that you don’t have to be an adult to change the world. As he puts it in Harry Potter and the Order of the Phoenix. “Every great wizard in history has started out as nothing more than what we are now, students. If they can do it, why not us?” 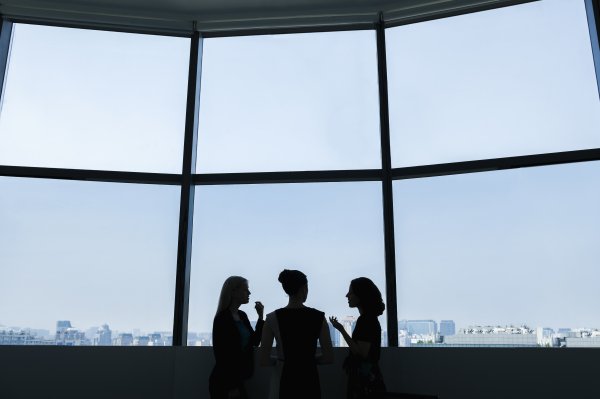 How 3 Female Entrepreneurs Bounced Back
Next Up: Editor's Pick