Sen. Rand Paul met with civil rights leaders Friday in Ferguson, Missouri, the city torn apart by racial unrest following the August shooting of an unarmed black teenager by a white police officer. During his visit, the Republican Senator, who is seen as a likely presidential candidate, stated his concerns about long prison sentences for nonviolent crimes, the loss of voting rights for felons and military programs to give unused equipment to local police departments.

“I wanted to find out what we could do to make the situation better,” Paul said of his visit Friday.

“Given the racial disparities in our criminal justice system, it is impossible for African-Americans not to feel like their government is particularly targeting them,” Paul wrote in an opinion piece for TIME this summer.

The meeting came just days after another young black man was shot by police in nearby St. Louis, after allegedly firing a stolen handgun at an officer. And it came on the eve of a weekend series of protests organized to keep national attention on the state’s issues.

Paul joined the leaders in the conference room of a real estate office across the street from an art installation Friday, where residents had tied ribbons to a metal fence with messages commemorating the protests that began in August after the shooting of 18-year-old African-American student Michael Brown. Paul arrived in town Thursday for a round table discussion at the Show Me Institute, a conservative think tank in St. Louis. That event, like the discussion with local and civil rights leaders in Ferguson, was not open to the press.

Friday’s discussion was free-ranging, less a speech than a question and answer session. People at the event said that they remained concerned about the GOP’s opposition to federal funding for job training and education and other social programs. Paul said that he would support increases in federal spending for job training in urban communities that could be paid for with cuts to the costs of incarceration. “I think there would be money for job training if you greatly lessened criminal sentencing,” he said.

“They are also frustrated that things aren’t happening fast enough,” Paul said after the meeting, which was organized by the NAACP.

Paul’s trip to Ferguson—the first by a 2016 candidate—is a reminder of how his position on criminal justice reform can make a Republican more palatable to the African-American community. As riots turned violent in Ferguson, Paul distinguished himself among Republicans by striking a more forceful tone in addressing the root of the protesters’ anger and putting forth potential solutions.

“He is stumping like he should be trying to stump if he wants to run for President,” said John Gaskin II, who participated in Friday’s event.

The fatal police shooting of Brown on August 9 revealed a deeper crisis of trust between the authorities and Ferguson community and sparked a discussion about race relations in America. While the armored trucks are gone and the air free from tear gas, this weekend demonstrators are expected to continue calling for the arrest of Ferguson police officer Darren Wilson, who has remained free but silent since killing Brown. 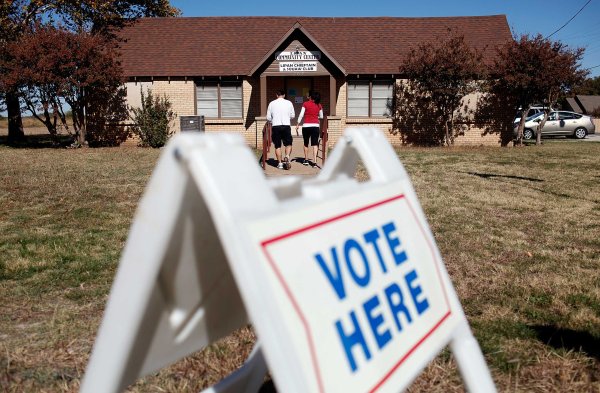 Courts Shoot Down Voter ID Laws in Texas and Wisconsin
Next Up: Editor's Pick