It's Only a Play on Broadway: Inside Job

It seems ungracious be too harsh on It’s Only a Play — the revival of Terrence McNally’s 1986 comedy that has just opened on Broadway. McNally, a New York theater mainstay who once wrote funny plays (Bad Habits, Next) before winning Tonys for Love! Valour! Compassion! and Master Class, concocted the work as a frothy send-up of Broadway, packed with inside jokes, topical references and catty theater-world wisecracks. For the new revival, the references and in-jokes have been updated (from Charles Nelson Reilly and Arlene Francis to Harvey Fierstein and Kelly Ripa). The new production, moreover, has attracted the most star-studded cast of the Broadway season, headed by Nathan Lane and Matthew Broderick, together again for the third time (after The Producers and the 2005 revival of The Odd Couple). The jokes are nonstop, most of them get big laughs, and the standing ovation starts almost before the curtain can drop.

But holy David Merrick — what a mess. We’re at the opening night party of a new Broadway show, written by a celebrated but insecure playwright (Broderick) and attended by his good friend (Lane), an actor now doing sitcoms in Hollywood. The room quickly fills with the Broadway equivalent of the bomber crew from an old World War II movie. There’s the show’s rich but clueless producer (Megan Mullally); its eccentric, critically acclaimed British director (Rupert Grint); an alcoholic, over-the-hill leading lady (Stockard Channing); a pompous theater critic (F. Murray Abraham) who, for some inexplicable reason, is hanging out for the evening with the people whose show he is about to trash; and an eager young coat-check attendant (Micah Stock) who is entranced by the whole scene.

I wasn’t. The jokes may be updated, but the satiric targets seem awfully familiar: the influx of British shows, actors who leave the theater to do bad television, critics who secretly want to write plays, and anybody who lives outside the Big Apple. (“New York without the theater is… Newark.”) No joke is too lame that it can’t be repeated a half-dozen times (a character named Wicker mistakenly called Wacker) and flogged mercilessly. Any decent sitcom writer could have boiled the thing down to a passable 60 minutes, but at two bloated acts, the show is both self-indulgent and interminable.

There is no plot, just the ginned-up suspense of waiting for the reviews to come out. In the ’80s, the New York TV stations all had Broadway reviewers, and the wait at least made some real-time dramatic sense. Now the TV critics are gone, and so characters are forced, awkwardly, to simply repeat the print reviews as they’re read to them over the telephone. The New York Times’ Ben Brantley is name-checked so often that he should be getting Equity scale for the show. (Brantley was sitting two rows in front of me at the preview performance I saw, and seemed to be a good sport about it.)

As for the starry cast, it’s a decidedly mixed bag. Lane is his usual vibrant, ingratiating self, milking every laugh with his rubbery eyebrows and crack comic timing. Channing is fine as the drunk diva, and Abraham, that old pro, does the best he can with the patently ridiculous part of the critic. But Rupert Grint (of Harry Potter fame), dressed in a garishly patterned three-piece suit, looks like a refugee from Carnaby Street in the 1960s, not a parody of the grunge-chic British esthetic of today. Mullally’s spaced-out, vaguely southern producer is grating from start to finish. As for Broderick — well, his monotonous, winsome, sing-songy acting style has become something akin to kabuki theater. Any resemblance to an actual living person is purely coincidental.

Yes, it’s only a play, and a sellout hit besides. But for Broadway audiences — at least the ones who don’t attend Terrence McNally’s opening-night parties — it’s only a trifle. 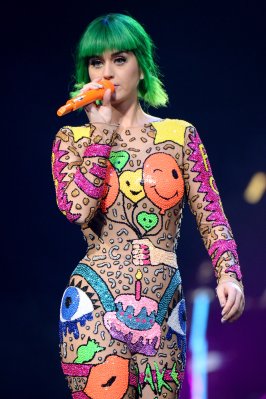 Katy Perry to Perform at Super Bowl
Next Up: Editor's Pick