The 2014 Nobel Peace Prize was awarded jointly to Kailash Satyarthi and Malala Yousafzai “for their struggle against the suppression of children and young people and for the right of all children to education,” the Norwegian Nobel Committee announced on Friday.

Both Satyarthi, a 60-year-old Hindu from India, and Yousafzai, a 17-year-old Muslim from Pakistan, are renowned children’s rights activists. Malala became a household name around the globe when, in October 2012, she was shot in the head by a Taliban assassin while on her way to school. The young girl had been an outspoken advocate of girls’ education before the shooting. Afterward, she became an international beacon for the cause and was chosen as TIME’s runner-up for Person of the Year in 2012. She was later named one of the world’s 100 Most Influential People. Now, at age 17, she is the youngest-ever Nobel Laureate.

Satyarthi has long been a dedicated campaigner for youth rights in India, focusing particularly on child labor issues. His New Delhi-based organization Bachpan Bachao Andolan — or Save The Children — describes itself as a grassroots movement against child labor, trafficking and slavery. In an interview with CNN, Satyarthi said winning the award is “an honor to all those children who are still suffering in slavery, bonded labor and trafficking.”

The committee’s announcement went on to note:

The news exploded on social media — particularly Twitter — where everyone from politicians to global organizations to celebrities shared their appreciation, including:

Meanwhile, the Prime Minister of Pakistan, Nawaz Sharif, said of Yousafzai’s win in a statement to AFP: “She is (the) pride of Pakistan. She has made her countrymen proud. Her achievement is unparallelled and unequalled. Girls and boys of the world should take the lead from her struggle and commitment.”

In a statement released early Friday, former U.K. Prime Minister Gordon Brown said of the prize, “They are two of my best friends and two of the greatest global campaigners who deserve the Nobel Peace Prize for their courage, determination and for their vision that no child should ever be left behind and that every child should have the best of chances.”

Brown, along with his wife, Sarah, have long been supporters of Yousafzai, who now lives in the U.K. The former Prime Minister, who, in 2012, declared Nov. 10 as ‘Malala Day’ in honor of her and the more than 50 million girls around the world who are unable to get an education, is now the U.N.’s special envoy for global education. 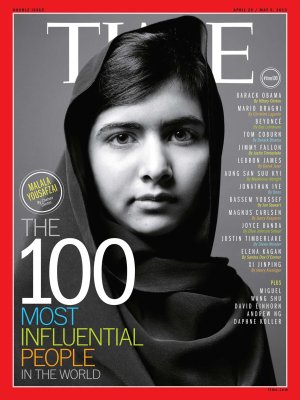 Meeting Malala: Her Cause Clearly Comes First
Next Up: Editor's Pick