Baghdad has been home to Riyadh Azzu and Sanaa Habeeb for their entire lives. It is where they first met at church in 1969, married in 1976, developed their careers—he is an engineer, she is a pharmacist—and raised their son and daughter, who are now both doctors. Their part of town has long been an area where Christians and Muslims have peacefully coexisted. But now all that’s changing—Iraq’s economic, political, and religious turmoil, especially with the Islamic State of Iraq and Greater Syria’s (ISIS) attacks on minority Christian communities, is uprooting their lives.

This week Azzu, 61, and Habeeb, 60, are sharing their story with Pope Francis and the bishops gathered at the Vatican for the Extraordinary Synod of the Bishops on the Family, a special gathering of church leaders to discuss practical issues of marriage and family in the modern world. They are one of the fourteen couples appointed by the Holy Father to participate as auditors, a term for the non-voting attendees. On paper, their role is to serve as “witnesses of Christian family life in an Islamic context.” In person it is to witness to the larger story of the issues Christian — particularly Catholic — families face in the Middle East.

The couple previously represented Iraq with 10 other families at the 2012 World Meeting of Families in Milan. They are humbled by the opportunity to be the ones to share their story at the Synod, they tell TIME. They were likely selected because their English skills are good and they are regular church attendees, Habeeb says, but she added that lots of families deserve this honor. The two main issues are on their minds as they prepare to speak to the Synod fathers: the impact of war on Christians, and immigration’s role in fracturing the family.

Both are experiences they have lived firsthand. ISIS has driven more than 100,000 Iraqi Christians out of the country over the last few months. The June 11 assault of northern Iraq was a disaster for their community. While Azzu and Habeeb were relatively safe in Baghdad, they watched as fellow Christians were driven from cities like Mosul and are now living in tents and church yards. “That did it for us. They were people like us—they had good homes, good jobs, they were driven away just like that,” Habeeb says. “It’s like the 9/11 of Iraq.”

The pair’s family has been torn apart as conditions have worsened in recent years. Their distant relatives have all left the country. Their son moved to Michigan and is now an American citizen. Their daughter, who has a PhD in diagnostic imaging, and her husband, moved with their grandchildren to Germany to try to build a new life. “She has to start again, from zero,” Habeeb explains, talking about how many youth are leaving the country, in many cases along with older family members, which fractures the close family ties Arab countries have developed over centuries. “She had no future. It is a hopeless case, Iraq.”

For now, the couple is staying in Iraq, but they are considering a move to the United States with their son. The burden brought on by being required to pay religious taxes and not be able to openly celebrate Christian feast days and big holidays like Christmas is taking its toll. Many of their moderate Muslim friends have already left the country. Their own church, St. Joseph Chaldean Catholic, has shrunk to 200 families, compared to 2,000 families two decades ago.

The bishops at the Synod are aware of the challenges Christians in Iraq have been facing, and already voted to send a letter of encouragement to Iraqi families. In the midst of it all, Habeeb and Azzu are trying to bear testimony to their Catholic faith and to loving their neighbors, whether they be Muslim, Christian, or anything else. Church, they say, is what has sustained them and given them social community and friends. But they also recognize there are limits to what the Catholic Church can do to improve the situation.

“[The Church has] shown wonderful acts of solidarity, this is beautiful. They are making their voices heard in the world community . . . they are praying, there are contributing financially,” Habeeb says. “What else can they do? It is a moral voice.”

The U.S. and its military power is another matter. “It is [a] very slow reaction, they are saying it takes a lot of time, years maybe, I don’t know why,” Azzu says of the American response. “It is baffling,” Habeeb adds. “They say you people have to tackle their problems on your own, and they are right. . . . I’m sure our politicians are to blame also. . . . We had large expectations when America liberated us the first time, a beautiful sense of freedom. All of this disappeared.” 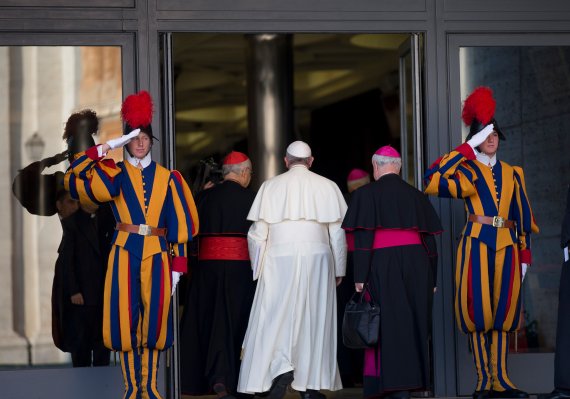