The ref checked his hands. Duke vaselined Erik’s cheeks, and for a moment Erik stood perfectly still, eyes closed, as Duke rubbed two greased thumbs over his cheekbones. Brown-orange complected, head shaved, Erik was a completely different creature than he had been in Vegas. Instead of looking ill in a recognizable way, he looked simply other, glowing brown-orange under the lights, shadows over his sunken eyes, under his pecs and neck, under each tiny ripple of stomach. He accepted a hug from Duke, a hug from Pettis, and stepped through the cage door to a bright, white, sterile cage. He had never fought first before, never seen a cage so clean.

Raphael Assunção walked out, singing along to his entrance music. He was four inches shorter than Erik, with broad muscles unlike anything on Erik’s body. He had a flat brown fighter’s nose, a wide brow, dark stubble about his mouth.

Erik runs in and leans low on his legs, almost squatting—the stance of a man preparing to be pulled down, afraid to be knocked off balance by an opponent five inches shorter than himself. And yet even in this awkward fearful hunch Erik moves so fast he is hard to see, arms up and down, hands fisted then palms open, a step here and a step there—to Assunção’s every motion, three in response. Erik kicks high with the kick that had downed Cisco but Assunção just throws an arm in front of his face, blocks it. The TV color man compares Erik to Anthony Pettis—“long and lean, that reach”—as Erik carefully hops toward Assunção, and Assunção carefully hops away. Assunção stops his slow backward walk, swings, misses, and backs away more. They are falling into a partnered pattern, rarely touching, forward and back. “He’s got that right hand loaded,” the color man says of Assunção, and it’s true, Assunção is just waiting for the moment to lunge that right hand into Erik’s face, knock him to the ground. Assunção throws a high kick, and Erik pops away with a single deft jump, so smooth it seems Erik knew where Assunção was headed long before he threw. Assunção swings, misses, and Erik does not retaliate.

“Come on guys,” shouts someone from the crowd, “this is a contact sport!”

“Just throw!” shouts Duke from behind the cage.

Erik is afraid of losing focus; the fight is a minute and a half in; he feels that he must end the fight or he’ll simply fall. But he hasn’t yet found a range, and there is that loaded right hand. A normal fight for Erik is a moment of total absorption, but with the newfound cloudiness, the way it throws him off, he must somehow keep track of his own body in addition to Assunção’s. It is as if Erik is standing outside himself, reminding his body to do what it is told. It’s all so unstable, the body’s obedience so subject to chance, that Erik is desperate for a way out.

Assunção lands a light kick to the shin, as if checking to make sure Erik is solid matter. Erik hits back with a left but Assunção dodges it. Erik finally lands a loud thwap of a kick to Assunção’s chest; the sound resonates through the silent stadium.

Assunção jabs with his left, misses, and charges, swings hard with that loaded right. Erik sees him coming. As Assunção runs toward him Erik throws a light left hook, barely visible. His fist hits the soft spot behind Assunção’s ear with all the strength of his cocked arm, but also the force of Assunção’s own charge; it appears as if Assunção has run full speed into Erik’s clenched hand. It is a moment in which Erik hardly moves; his arm only slightly extends past his own body, a movement almost impossible to see, and so there is a confused silence as Assunção hits the ground, his head with a thud, his flaccid arms hitting the canvas above his head a millisecond later. A realization passes, the silence breaks. Nineteen thousand people scream.

This moment lasts for days. We can only open our mouths in a united wordless moan. We are each of us simple tools of perception, free of the cloudying intellect, allowed a thinking of the body only accessible when men like Erik can, for a single solitary second, lead us outside ourselves. He has torn a small hole in consciousness. It is already closing.

Erik collapses onto his knees, lifts his hands to his shaved head, looks up in tears of gratitude at the fact that he is still alive. He places his head on the mat, kowtowing, jumps up, fist bumps Bruce Buffer, who doesn’t break pace as the ref raises Erik’s hand: “Referee Kevin Mulhall has stopped this contest at two minutes thirty two seconds in the very first round, declaring the winner, by knockout, Erik ‘New Breed’ Koch.” The color man hops onto the canvas with a mic, which Erik grabs so as to pump up the crowd: “What’d you guys think, was that a good opener?” And the crowd launches into its scream once again.

But now he is shooed off the stage for bigger, more important fighters. We watch the other fights as we come down, reenter ourselves, reacquaint ourselves with the limiting walls of perception. We wait for Shogun to defend his title as the best light heavyweight in the world. In his last fight, against Lyoto Machida, he was glorious. But Shogun is twenty-eight and we realize, as we watch him pummeled, kicked, ground into the mat, and finally slumping against the cage like a tired drunk as a younger man knees him in the face, that Shogun has grown prematurely old. The ref steps mercifully in. The fight is so unexpectedly quick that the Pay-Per-View gods have time to fill; there is room to televise an extra fight. And so a million people, after they see Shogun fall, watch Erik watching himself knock a man to the ground.

From Thrown, copyright © 2014 by Kerry Howley. Used by permission of Sarabande Books. All rights reserved.

Kerry Howley is the author of the new book Thrown. Her work has appeared in Harper’s, The Paris Review, The New York Times Magazine, The Atlantic Monthly, The Wall Street Journal, Slate, and Bookforum. She holds an MFA from the University of Iowa, where she was an Arts Fellow and the Provost’s Visiting Writer in Nonfiction. 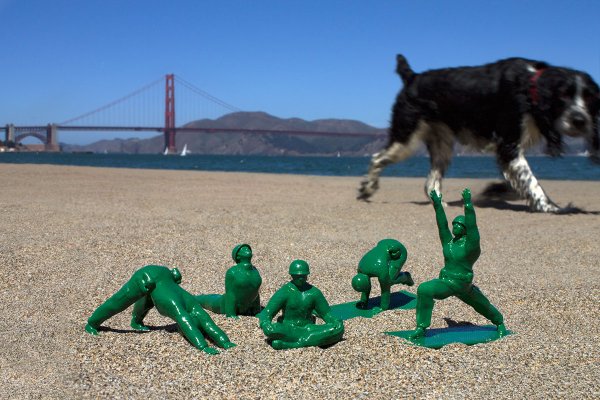 Check Out These Army Figurines in Yoga Poses
Next Up: Editor's Pick