No Can Do: The Pentagon Explains Why It Can’t Save a Syrian Town

An allied air strike hits a hill in Kobani Wednesday near where ISIS fighters had planted their flag.
Aris Messinis— AFP/Getty Images
By Mark Thompson

The U.S. military’s motto often seems to be “Can-do!” But the motto at Wednesday’s Pentagon briefing might as well have been “Can-dor”.

That’s because, as the building readied for a visit by President Obama, its spokesman made clear there is little the U.S. military can do to save the more than 200,000 people fighting for their lives in the Syrian town of Kobani, just south of the Turkish border.

It’s strange, as the U.S. war in Afghanistan enters its 14th year, that the U.S. public has this abiding faith that there is nothing the U.S. military cannot do. But it cannot defeat the jihadist fighters of the Islamic State of Iraq and Greater Syria as they storm Kobani, Rear Admiral John Kirby said.

“Time matters here,” Kirby told reporters at the Pentagon. That means that while the U.S. and its allies can do little for Kobanis now, they believe they will be able to help them later.

Kurdish leaders in Kobani fear a massacre if ISIS overruns Kobani. But the Pentagon seems unconcerned. “I know of no plans for a humanitarian relief mission in Kobani,” Kirby said. “Many of the residents have already fled.”

The U.S. has been restricted in its ability to battle ISIS for two reasons: it waited for months before taking action, and then—per Obama’s orders—it decided not to commit any U.S. ground troops to the fight. Even a small number of them on the ground in Syria and Iraq could be a major help in improving the lethality of air strikes.

Kirby’s comments about the reach of U.S. military power no doubt echoed what Obama heard later in the day when he met with the nation’s military leaders, including Defense Secretary Chuck Hagel, Army General Martin Dempsey, chairman of the Joint Chiefs, and Army General Lloyd Austin, who as head of U.S. Central Command is leading the fight against ISIS.

“There is a broad-based consensus, not just in the region but among nations of the world, that [ISIS] is a threat to world peace, security and order,” Obama said at the Pentagon. “Their barbaric behavior has to be dealt with.”

But the Pentagon spokesman took pains to explain that the limits of air power and the lack of allies on the ground in and around Kobani likely doom it to fall to ISIS. “Airstrikes alone are not going to do, not going to fix this, not going to save the town of Kobani—we know that,” he said. “We don’t have a willing, capable, effective partner on the ground inside Syria.”

The bombing in and around Kobani, while stepped up in recent days, is modest in scope. That, in part, is due to the fact that there are so few targets. “I’m counting 11 strikes just in the last two days,” Kirby said.

“It’s not like we’ve ignored the crisis around this town of Kobani,” he added. “We have hit some dynamic targets, smaller tactical targets there. And we do believe that they have had an effect on [ISIS] in and around that town. [ISIS] does not own Kobani right now.”

Kirby, a Navy surface warfare officer, explained what attacks from the sky can do on their own. “Airpower can have an initial effect on forcing them out of an area or denying them structure, whether it’s hard buildings, or the infrastructure of governance that they have, or revenue,” Kirby said. “You can deny some of that temporarily from the air, but it’s not going to be the long-term fix. The long-term fix is… going to be competent ground forces that can retake territory from them.” That’s more than a year away.

Sure, the U.S. could send in forces that could stop the onslaught, but it’s doubtful that Congress—or the public—would agree with such a move. They were spoiled by 1991’s Gulf War against Saddam Hussein, when a 43-day air campaign was followed by a four-day romp by U.S. ground troops. About 25,000 Iraqis died in the U.S.-led campaign to push them out of Kuwait, compared to 148 U.S. troops.

There’s only one real solution to the problems posed by ISIS, Kirby suggested. “What really has to happen, long term, is good governance in Iraq and good governance in Syria,” he said. “There is an element of strategic patience here that I think everybody needs to consider, all of us, all of you, the American people, everybody.”

Unlike faith in their military, however, strategic patience—or any kind of patience, for that matter—has never been an American trait. 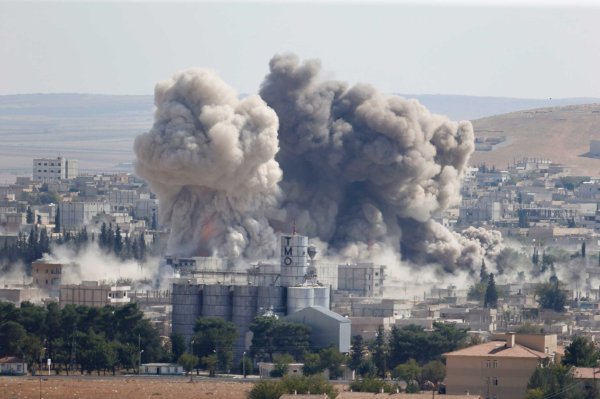 Pentagon to Brief Obama on Grim Battle Against Jihadists
Next Up: Editor's Pick