'Excalibur' barks from the balcony of the private residence for the Spanish nurse who has tested positive for the Ebola virus on October 8, 2014 in Alcorcon, Spain.
Pablo Blazquez Dominguez—Getty Images
By Dan Kedmey

Animal lovers have protested, tweeted and petitioned by the tens of thousands to stop Spanish officials from euthanizing an Ebola patient’s dog.

The outcry began shortly after the patient’s husband, Javier Limon, posted a YouTube plea to animal lovers to help spare the life of “Excalibur”. NBC News reports that Limon has been placed in isolation in a Madrid hospital ever since his wife, nurse-aide Teresa Romero Ramos, became the first person to contract the virus outside of west Africa while caring for a Spanish priest who had returned from the region.

Limon said in the recorded appeal, “I’m in the hospital and I’m sending a call to all the population for them to help me save my dog, Excalibur, who they just want to kill just like that without following any proper procedures.”

There have been no documented cases of dogs spreading Ebola to humans, or vice-versa, though other animals may become carriers.

Animal lovers protested outside the couple’s apartment in a southern suburb of Madrid on Wednesday, where Excalibur had been holed up alone with a bathtub full of drinking water and 33 pounds of dog food, Limon told Spanish daily El Mundo. “Murderer,” several shouted at health workers who had arrived to disinfect the apartment.

Protesters also launched a petition to spare Excalibur which has gathered more than 360,000 signatures to date and flooded Twitter with pictures of their own pet dogs signs reading, “#SalvemosaExcalibur.”

The campaign has intensified amid conflicting reports of the dog’s fate in local media, best summed up by the El Mundo headline “¿Dónde está Excalibur?” The most recent update posted by Limon on Facebook says the dog has not yet been taken away by authorities. 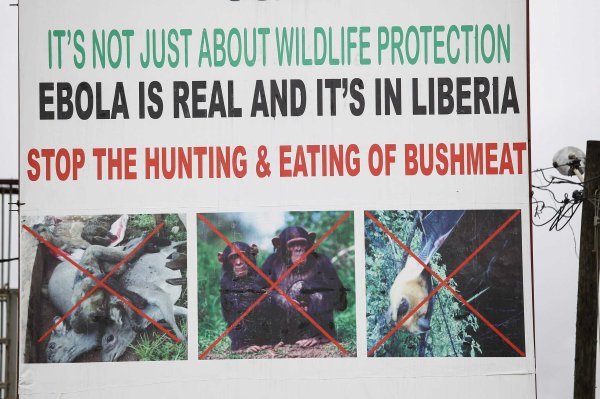 Animals and Ebola: What You Need To Know
Next Up: Editor's Pick