Grapefruit Juice May Be As Effective as Diabetes Drugs

A new mice study suggests that grapefruit juice might be just as effective as the type 2 diabetes drug, metformin, at lowering blood glucose. The research, which was funded by the California Grapefruit Growers Cooperative, was published Wednesday in the journal PLOS ONE.

Regarding the funding, study co-author Joseph Napoli, PhD, professor and chair of nutritional sciences and toxicology at the University of California, Berkeley, said this: “I understand the skepticism.” But the funders had nothing to do with the experiment, he says, besides providing some money and grapefruits. “We were very clear in telling them, you’re going to get the data we get,” Napoli says. “We can’t guarantee you’re going to like what you see. It might be nothing.”

What they found was not nothing.

The researchers fed different groups of mice a range of liquids: sweetened diluted grapefruit juice, sweetened water, and water that contained metformin, a diabetes drug. The mice who were fed a high-fat diet typical of the average American and drank the grapefruit juice lost 18% more weight than those drinking sweetened water, and they had a 13-17% drop in blood glucose levels and threefold decrease in insulin levels. (Mice on a low-fat diet had far less dramatic effects.)

But one of the biggest findings was that mice drinking grapefruit juice had glucose-lowering effects that were just as potent as the mice who sipped on metformin. “It was very surprising,” says Napoli.

You might have to drink a lot to get those prescription-level effects, however. The amount of grapefruit juice used in mice equates about four cups a day in people, the study says. But the researchers were so encouraged by the results that they plan to next look at if lower doses have the same impact.

“When someone says a particular food has this magic quality of improving your health all by itself, we mostly take that kind of claim with a grain of salt,” Napoli says. But Napoli, an avid grapefruit juice drinker himself, who says he’s convinced a few colleagues of its health merit, thinks his results show that grapefruits might actually do something special when it comes to diabetes. 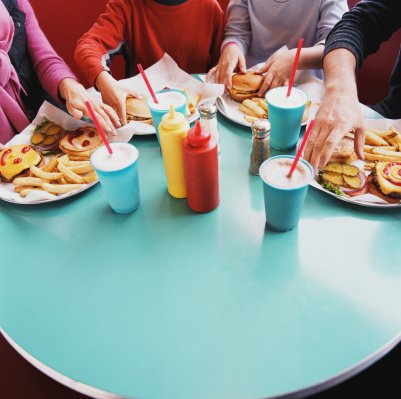 Fast-Food Chains Cut Calories, But Does Anyone Care?
Next Up: Editor's Pick