As Islamist militants, Syrian Kurdish fighters and American fighter jets continue to fight for control of the strategic Syrian town of Kobani, some of the most influential reports on the battle — and the war in Syria generally — are emerging not from conventional news outlets but from two men based in regional cities in the Midlands region of England. The increasing difficulty of reporting on the the conflict from the ground was made all too evident by the brutal killings of the American journalists James Foley and Steven Sotloff by the extremist group the Islamic State of Iraq and Greater Syria (ISIS), which is also holding hostage British photojournalist John Cantlie. Yet the growth of social media, facilitated by technological advances that allow Internet access even in a war zone, has made detailed, ground-level information on the war available online, and the two British-based sources have become particularly adept at analyzing it. One is a Syrian exile named Rami Abdul Rahman, who runs an information service called the Syrian Observatory of Human Rights from his two-bedroom house in Coventry; the other is a blogger named Eliot Higgins, who uses the pseudonym Brown Moses and who works from his home in the nearby town of Leicester.

Abdul Rahman’s reports are frequently cited by mainstream media outlets and Western government agencies, including the U.S. Department of Defense, while Higgins has been credited with detecting significant developments in the war, such as the use of cluster bombs and barrel bombs by the regime of President Bashar Assad. Higgins was the first to notice that the rebels were using Croatian weapons, and he worked with a New York Times reporter to establish that they had been supplied by Saudi Arabia, with the knowledge of the U.S. government. More recently, he used satellite map imagery to identify the place in the hills south of the ISIS stronghold of Raqqa where James Foley was murdered.

The two men work in different ways. Abdul Rahman, who was born Osama Suleiman in the city of Baniyas on the Syrian coast and came to the U.K. in 2000, has four main contacts in Syria. They help to collate information from more than 230 activists. By contrast, Higgins has no prior knowledge of Syria and no contacts on the ground. He started the Brown Moses blog in March 2012. His first posts were about the British phone hacking scandal, but in May 2012, he started analyzing events in Syria. He was laid off from his job as an office administrator in October 2012, and worked on a temporary contract for four months. In February 2013, he launched an Indiegogo fundraising campaign that raised more than £6,000 and allowed him to continue his analysis full-time. Since then, he has become one of the pioneers of what he calls “citizen open source investigation.”

Higgins believes that the proliferation of social media reports cancels out the risks of relying on individual posts, which, without being triangulated with other evidence, are hard to trust. “People need to start thinking about social media reports not as individual pieces of information, but as part of a network,” he says by email. “So, for example, with Syria when I see a YouTube video that’s interesting, I’ll track down the original YouTube channel, associated Facebook and Twitter accounts, see who those accounts are linked on, and so on. That way you can build a broader range of information about an event from multiple sources.” Yet the volume of information presents a challenge in itself, and Higgins is seeking funding for a project called Syria Right Now, which he says will make it easier for its users to search through the mass of material online. “We’re talking thousands of social media accounts, and as it stands, it’s a nightmare to review them in an orderly fashion,” he says. “Syria Right Now aims to collate every Syrian opposition social media account, tag them with information, then organize the accounts in a much more accessible way, producing daily reports in Arabic and English. The aim is to visit one site and be able to find the accounts by groups, location, region, etc with a few clicks of a button.” Higgins is hoping to get a grant of £18,000 to run the project for six months.

Higgins does not believe that his work can replace the work of the reporters on the ground, but he believes it can help direct their activities and reduce the risks they face. “There’s a huge amount of information available from armed opposition groups and media groups, which can be used to inform the work of journalists, in particular how safe an area may be. If properly exploited, this information could have saved the lives of journalists and others working in Syria,” he says.

The dangers confronting journalists have been compounded by the retrenchment of conventional media companies; much of the coverage of the war has been provided by freelancers, who operate with little training, insurance or protection. John Owen, Professor of International News at City University in London, says that “news organizations can’t contract out their duty of care and moral responsibility if they choose to air or publish freelancers” material or “tempt them into pursuing risky stories.” Some media outlets, such as the British newspapers the Guardian and the Sunday Times, have declined to take reports from freelancers, because they do not want to create a market for their stories. Yet it is the largely unpaid citizen journalists, who live in the war zone and report on the events taking place around them, who are most in danger. According to data published by Reporters Without Borders before Sotloff’s murder, 122 Syrian citizen journalists have been killed in Syria since March 2011. Nonetheless, the volume of material posted online continues to grow, supplying the raw material that allows analysts like Higgins to detect patterns in the chaos. 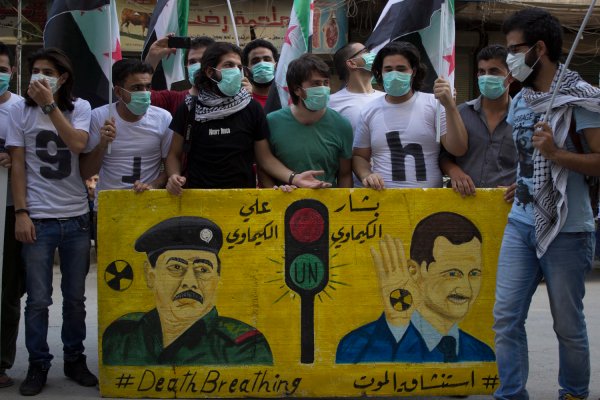