Can Dogs (And Other Animals) Get Ebola?

The Ebola virus can be found across the animal kingdom, from bats and birds to pigs and porcupines. But there is a difference between having a disease and transmitting it to another animal—or another species. That’s at the heart of a controversial move by Spanish health authorities, who have obtained a court order to euthanize the dog belonging to a nurse who contracted the Ebola virus in Madrid, saying that available scientific knowledge suggests dogs can transmit the virus to humans. But how much do we know about which animals can catch and transmit the deadly virus?

Dr. Tom Frieden, director of the U.S. Centers for Disease Control and Prevention (CDC), said in a news conference on Tuesday that “we know in rural areas of Africa, Ebola can infect mammals. In fact, that’s how it spreads, from probably bats to animals living in the forest, people hunting the animals.” Ebola has to date been found in many bush animals, including bush pigs, rodents, porcupines and forest-dwelling antelope. Any infected carcasses could spread the virus to hunters or to anyone who eats bush meat.

To date, there is no documented case of Ebola spreading to people from dogs or dogs to people, and only one study, carried out by the CDC, looks at whether dogs can get Ebola at all. This research into the prevalence of Ebola-virus antibodies in dogs from regions of Gabon affected by the 2001–2002 outbreak showed that “dogs can be infected by Ebola virus” but exhibit no symptoms and the infection eventually clears.

The researchers concluded that “dogs could be a potential source of human Ebola outbreaks and of virus spread during human outbreaks,” but they did not test their hypothesis that human infection could occur through licking, biting or grooming. Instead, the study assumed dogs would transmit the infection in the same way as other animals observed in experiments; those animals excreted viral particles (in saliva, urine, feces) for a short period before the virus was cleared. David Moore, an expert in infectious diseases from the London School of Hygiene and Tropical Medicine, said that since no dogs showed symptoms of the Ebola virus “there is absolutely no evidence to support a role for dogs in transmission.”

The study also suggests that differences in behavior and diet of pet dogs may alter risks in Ebola transmission. Whereas most dogs in Western Europe are fed dog food, many of the dogs studied in Gabon scavenged for their food, eating small dead animals that could have exposed them to the virus.

Both the World Health Organization and recent reports have suggested that the 2014 outbreak of Ebola can be traced to fruit bats in the West Africa region. Guinea, where bat soup is a local delicacy, has reportedly banned the sale and consumption of bat meat since the start of the outbreak.

Non-human primates, like monkeys, are also suspected carriers of the disease and, as in humans, the Ebola virus can kill them. Research has shown gorillas and chimpanzees suffer massive population declines during Ebola outbreaks, with the virus killing an estimated 5,000 gorillas in Gabon and the Republic of the Congo from 2002—2003.

There is limited data about the prevalence of Ebola in birds but a 2002 study from Purdue University found that the Ebola virus closely resembles the structure of several bird viruses. This means birds may be able to spread the virus to humans. Head researcher David Sanders said “while bird transmission of Ebola is by no means certain, the resemblance among all these viruses should encourage health officials to be on guard for it.”

Until 2009 no one knew that pigs could carry Ebola, because they show no symptoms of the disease. Three years after a case in the Philippines showed Ebola transmission between pigs and farmers, Canadian scientists found that apparently healthy pigs could pass on the most deadly strain of Ebola (the Zaire-Ebola virus) to monkeys without direct contact. In pigs, the virus mainly affects the lungs and airways, which means they can spread the virus through the air via small droplets (this does not mean Ebola is suddenly an airborne virus like SARS). However, Gary Kobinger who led the study said “we still don’t know if pigs are playing any role in the natural transmission or ecology of Ebola virus in Africa.”

Various studies carried out in the 1990s found that some animals (including guinea pigs, goats and horses) showed no or mild symptoms when infected with Ebola during experiments. The virus has never been observed in these species in the wild, but like pigs and dogs, these animals do not appear to get ill or die from Ebola.

Relatively little research has been carried out into the existence of Ebola in many other animals. It is thought that domestic cats are probably immune to it since the virus has not yet been found in any wild felines in Africa.

Should we worry?
Scientists have yet to confirm Ebola’s natural host—the animal that naturally holds the infection and is a primary source for the spread of the disease—but transmitting the virus is a different issue. Since “lethal disease has only thus far been seen in humans and primates and a few species of wild animals, it would appear that the main route of transmission is human to human contact,” says John Blackwell, President of the British Veterinary Association, an organization that often issues advice when animal-related diseases could affect the general public.

He adds that the course of disease in dogs and their role in transmission is not yet known, but “it would be a sensible precaution” to observe strict quarantine measures for animals in contact with a confirmed or suspected case of Ebola. As the Madrid nurse and her husband continue to campaign to save their dog from being put down, it remains to be seen what precautions the Spanish government will take in order to contain the spread of the Ebola virus. 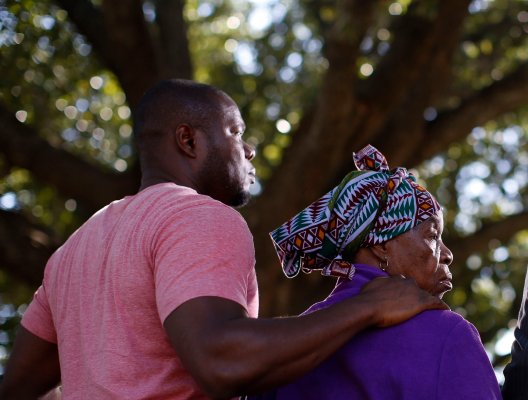