Protesters stand in the first anniversary of the chemical massacre in East Ghota, where hundreds of civilians were killed, in Aleppo, Syria on August 21, 2014.
Karam Almasri—Pacific Press/AP
By David Stout

Power said that Sigrid Kaag, the special coordinator of a joint mission to eliminate Syria’s declared chemical-weapons program, confirmed that the embattled Syrian regime failed to declare the four facilities.

Kaag told fellow diplomats of the suspect facilities during a briefing at the U.N. on Tuesday.

The U.N.’s joint mission to destroy the Assad government’s illicit chemical arsenal concluded earlier this summer — more than a year after the regime’s forces used sarin nerve gas against rebel fighters and civilians in the suburbs of Damascus, killing hundreds, if not thousands, of people.

The Assad regime later brokered a deal with Moscow, allowing international authorities to destroy the country’s chemical weapons in order to prevent U.S. forces from launching air strikes against forces loyal to the Syrian government.

The existence of chemical-weapons facilities within Syria continues to vex foreign governments and analysts alike, who fear that any number of the myriad opposition forces, including ISIS, could one day get their hands on the illicit stockpile.

The news follows confirmation from the Organization for the Prohibition of Chemical Weapons in September that chlorine-based weapons have been deployed against rebel forces fighting the government in Syria. 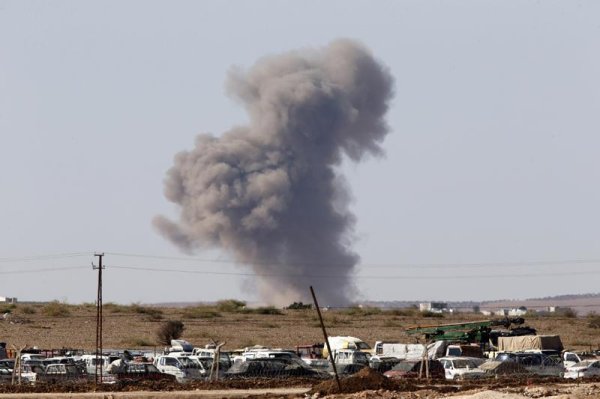