Brazil's Presidential Election, Round 2: It's the Economy, Estúpido

Brazil's President and presidential candidate for the Workers' Party Dilma Rousseff, speaks during a meeting with Governors and Senators elected in the first round of general elections, in Brasilia, Brazil on Oct. 7, 2014.
Evaristo Sa—AFP/Getty Images
By Dom Phillips / Rio de Janeiro

Brazil’s faltering economy will be high in voters’ minds when they return to the polls Oct. 26 for a second-round face-off in the country’s presidential election.

President Dilma Rousseff, whose Workers’ Party has run Brazil since 2003, won 41.59% of votes cast in a first-round poll on October 5 — not quite enough to beat outright Aécio Neves, a business-friendly candidate who was twice governor of Minas Gerais state. Neves, who had been trailing in third place in polls, came second with 33.55% in the latest in a series of upsets in a volatile campaign.

Neves’ resurgence can partly be explained by the worrying state of the country’s economy. The country is technically in recession, having retracted 0.6% in the second quarter of this year, and 0.2% in the first. On Tuesday, the International Monetary Fund revised its prediction for Brazil’s 2014 GDP growth down to 0.3%, from the 1.3% growth it had estimated in June.

“In Brazil growth is very low. This puts the advance of social programs at risk,” said Ricardo Ismael, a political scientist at the Pontifical Catholic University of Rio de Janeiro. Inflation is also running above government targets, at 6.62%.

Many voters, especially those in the upper classes, see Neves as a safe pair of hands. His Party for Brazilian Social Democracy ran Brazil from 1995-2002 under President Fernando Henrique Cardoso. Cardoso had won a first-round vote in 1995 after the ‘Real Plan’ he coordinated as Finance Minister ended hyperinflation. His government stabilized the economy and introduced much-needed economic reforms. But the Left attacked the party’s privatizations of state companies and lack of focus on social policies.

On Monday, Rousseff resurrected that attack, alluding to “ghosts of the past” and noting that inflation had reached 12.5% in 2002. “They never put the poor in the budget. All the social policies were restricted, made for few people,” Rousseff said. Her party’s flagship income support program, the Bolsa Família, or ‘Family Purse,’ has lifted millions of Brazilians from poverty. The president has said in campaigning her opponents would end it.

Neves countered with a broadside over the stagnant economy and a corruption scandal which has linked payments to politicians from the Workers’ Party and other coalition parties to inflated contracts from state-controlled oil company, Petrobras. His program maintains the Bolsa Família.

“Brazilians are very worried with the monsters of the present,” Neves said in a speech Monday. “High inflation, recession and corruption.”

Rousseff was initially favorite to win this election. But when the Brazilian Socialist Party’s Eduardo Campos, a ‘third way’ candidate who was in third place in polls, was killed in a plane crash on Aug. 13, his running mate Marina Silva took his place, tripled his share, and was soon polling equal with Rousseff and ahead in a second round vote.

But Silva’s campaign faltered under a barrage of attacks from the Workers’ Party, and Neves was able to present himself as a stronger candidate for change, with a tough performance in the last two television debates. He rode a last minute wave of support to second place. Silva fell to third with 21.32% of the vote, only slightly more than she achieved in the 2010 election, when she also finished third. Brazilians also voted for governors, Congress and state assemblies.

“The electors that were anti-Workers’ Party became more sympathetic to Aécio,” said Ismael, using the candidate’s first name, as is commonplace in Brazil. “He managed to convince in this sense.”

Neves now has three weeks to prove his point. But in a sign of widening voter apathy, 39 million Brazilians either abstained, or voted for nobody – more than the 35 million that voted for Neves. 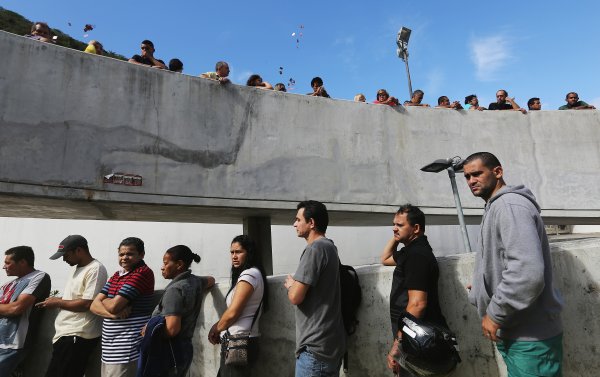 Brazil's Tight Presidential Election Heads for a Runoff
Next Up: Editor's Pick