Vatican Swiss Guards stand on salute as Pope Francis arrives for the morning session of a two-week synod on family issues including contraception, pre-marital sex and divorce, at the Vatican, Oct. 6, 2014.
Alessandra Tarantino—Associated Press
By Elizabeth Dias

The Heinzens are pretty much your everyday, middle-class Wisconsin couple. Alice, 60, and Jeff, 63, first met at a bar during a 1977 snowstorm, and their connection was immediate. Their parents each ran small, family-owned businesses—his a printing outfit, hers a shoe company—both had large Catholic families, and both had mothers named Rita. Now, 34 wedding anniversaries, three children, and four grandchildren later, they still attend mass, are Green Bay Packers fans, and host Sunday dinners for their neighborhood.

This week, their life story takes an unusual plot twist: they are attending the 2014 Extraordinary Synod of the Bishops on the Family at the Vatican, one of just fourteen married couples appointed by Pope Francis as Synod auditors, a term for the non-voting attendees at the meeting. They are also the only couple attending from the United States, and on Tuesday afternoon, they made a four-minute presentation to the Synod fathers sharing their experiences of married life.

“One thing that we have in common as auditors is, we are all a little astounded why we are here,” says Alice. “They certainly could have pulled the perfect families out of every country—they did not. They pulled the real families out of the countries, which is true to Francis.”

The Heinzens are in many ways a model of traditional Catholic teaching on marriage, especially its practical side. Jeff is president of McDonell Area Catholic Schools in Chippewa Falls, and Alice directs the Office for Marriage and Family Life for their diocese. They are both well known in Midwestern Catholic circles for their work teaching natural family planning (NFP). Alice serves on the NFP advisory board for the United States Conference of Catholic Bishops, and the Catholic NFP program that she and Jeff helped to create in Wisconsin has become a model for other NFP programs around the country. They are both active in the National Association of Catholic Family Life Ministers (NACFLM). Jeff is on an NACFLM advisory committee, Alice co-wrote a Catholic parenting curriculum called Teaching the Way of Love.

In their own life, they have learned that NFP can be a tool to keep a marriage strong. They first got involved with natural family planning after the birth of their third child. Alice had a difficult labor, and she admits she had been thinking, “If this man loves me, he’ll just go in and make sure that we’re done.” Jeff however talked with his priest, who said they had two choices if they were done having children: natural family planning or abstinence. At first Alice resisted—“Come on, I’m a product of the 60s and the 70s…my body my way,” she says—but then they say they learned that natural family planning was about more than fertility, it was about mutual trust in a marriage. Men and women in marriage complement one another and make each other better, she explains: “How better to begin to understand that than at the level of your fertility and the ability to procreate?”

Natural family planning is a method of measuring a woman’s fertility in order to achieve or postpone a pregnancy. Fertility indicators include measuring a woman’s cervical fluid, her temperature, and tracking her menstrual cycles to determine ovulation timing. The U.S. Department of Health and Human Services Department notes NFP can be an effective method of birth control if more than one method are used and used correctly. For every 100 couples who use the natural family planning method every year, according to HHS, one to 25 will become pregnant.

The Heinzens work training young couples about NFP is likely one of the reasons that they have built relationships over time with many top American bishops, who would have been involved in their selection for Synod participation. Cardinal Raymond Burke, who has been vocally defending the practice of not serving communion to divorced and remarried Catholics (and whom Pope Francis removed from the Congregation of Bishops last year) is from their diocese. Cardinal Timothy Dolan was the archbishop of Milwaukee before going to New York, and Archbishop Joseph Kurtz was Alice’s sister’s bishop in Tennessee and led some of her family members on a Holy Lands pilgrimage.

The Synod is only two days in so far, but it is already making an impression on them. As he has been hearing testimonies of bishops and auditors from around the world, Jeff has been feeling the need for the Church to commit especially to fathers, perhaps in the form of a special letter to fathers. “We have to remember that fathers of children aren’t always husbands of wives, and we have to call the fathers forward to step up to the plate again,” he says, choking up with emotion. “If we can get that one stone right, then that whole bridge assembles itself.”

The Heinzens also feel that the presence of the laypeople and the stories they are sharing is making an impression on the bishops. “Just watching the expressions on the Holy Father’s face as he hears those stories…I don’t know how that man sleeps at night with all that he knows,” Alice says, her voice trailing off. “They love us in there. They love us in there, they really do.” 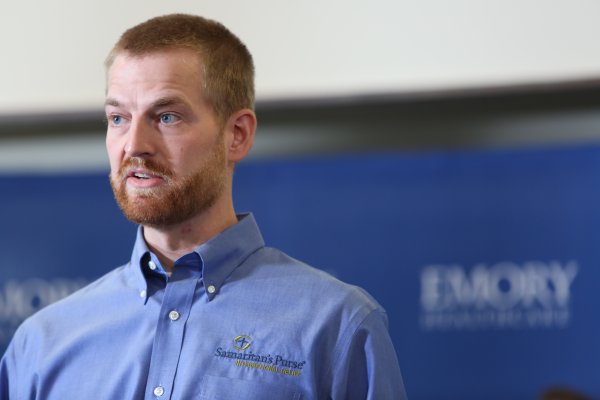 There's Nothing Wrong With Medical Missionaries Talking About Faith With Patients
Next Up: Editor's Pick