Caitlin Moran on Teen Girls, Sex and Pretending to Be Courtney Love

Caitlin Moran at the "Baileys Women's Prize For Fiction" at Royal Festival Hall in London on June 4, 2014.
Splash News/Corbis
By Jessica Bennett

Caitlin Moran doesn’t give a damn if you think she’s polite. Nope, the author and columnist — en route back to London after a whirlwind New York City tour — has never bothered to check her words at the door. An in an era where lives, and voices, can be literally curated, her prose is refreshing.

Moran made headlines when her first book, How to Be a Woman, a memoir, earned her comparisons to Lena Dunham and Tina Fey. Her latest, a novel, is called How to Build a Girl, and is a coming of age story – of sorts that’s being published as young adult fiction, but read by women of all ages. (A coming of age story with a lot, a lot, of sex.) Moran spoke with TIME about feminism, sex, the revolution and all sorts of other things:

TIME: I don’t know if I realized that in addition to your books, and doing a standup comedy tour, you write weekly for the Times of London. How do you manage to be so prolific?

Do you think you could have attracted the same audience for a “feminist” piece of work a few years ago?

It is an amazing time to be a female artist. There’s clearly a wave of women at the moment — Amy Schumer, Lena Dunham, Tina Fey, Chelsea Handler, the Broad City girls, Mindy Kaling, Amy Poehler — who have all come to the same realisation: you just don’t get any credit if you carry on being a timid, polite girl scared of talking about sex, abortion, politics, the physical bullshit of being a woman. You go to all this effort to be non-controversial and ‘good’ and not only does it f–k you up personally and emotionally, but there’s no career in it, either.

So how do you make a career?

With my working class ghetto background, I love telling girls that there’s money to be made in the revolution. You don’t just have to do it out of love. And you’re making your money out of being amusing and honest and unclenching women’s buttocks and making them feel like ‘Hey! Rather than trying to be a thin, hairless, well-groomed woman in uncomfortable shoes and a tight expensive dress, I’m just going to PURSUE JOY instead. I’m going to enjoy my life, because you’re a long time dead, and what I actually want to do is eat a cheese sandwich, have a shag, go for a brisk walk, and then watch Ghostbusters.’

On the shag point… there are a lot of people who are still surprised by a woman talking so candidly about women and sex. Why do you think we’re so afraid of female sexuality?

The funny thing about me writing ‘frankly’ about sex is that my generation still doesn’t get it. We still don’t realize what our 12 and 13 and 14 year olds are doing – they’re watching hard core pornography. So me writing an amusing, warm, kind book about hetero-normative consensual sex and masturbation is like … whatever. I mean, most teenagers would be like ‘where is the sex in here?’ But what is important is the tone in what I write. For teenage girls – and boys – to read about sex being discussed cheerfully, and truthfully, and with a sense of glee and gossipy ‘Oh my god NO!’

Your daughter is 13. Your protagonist is 14. I think my parents were scared to death when I was that age. How do you describe the glorious teen mind?

Teenagers are extraordinary – I remember all my teen years with utter clarity – because everything’s new. Everything’s a first. First kiss, first party, first outfit you chose and bought yourself, first train journey, first cigarette – first record you love so much you think the love will actually, utterly kill you. Or make you rule the world. It’s why pretty much everything I’ll ever write will be about teenage girls. Fat, gobby working class clever gleeful brilliant idiot teenage girls. It’s a Woody Allen deal. He does New York Jewish men. I do gobby working class teenage girls.

Your column is not an advice column, but you give pretty damn good advice. Got any for the teen girl in all of us?

One of the things I observe constantly among women my age is this utter lack of confidence. The fumbling over owning our voice. The apologizing before we speak. The ending statements in a question. Where’d you get the, er, balls to just not care?

Fake it ‘til you make it, as Johanna [her new book’s protagonist] discovers, is the key thing. I wrote my first novel when I was 15, and when I went down to London to have a meeting about publishing it, I froze in the doorway, thinking ‘I can’t take this meeting! I don’t know what to do!’ I was a very overweight virgin too poor to have a coat – I was wearing a dressing gown, instead – with no friends, and no education, and no idea of how to talk to adults. And I had a brilliant and revolutionary thought, as I stood in that doorway: ‘Well – just pretend to be someone who does know what to do.’

I chose Courtney Love. I spent the next five years pretending to be her. Because she seemed fearless. Because she didn’t care what people thought about her. This is why culture is so important – why it’s key for us to see as many different people as possible; why its embarrassing that people of colour, LGBT and woman are so under-represented on TV, in movies, in the media. Or that, when we appear, it’s still in largely stereotypical, non-lead roles. You cannot be what you cannot see. Give us more strong, amazing, fantastical people that we can pretend to be, in those difficult years when we’re building ourselves.

There’s a new documentary that premiered on PBS this week about women and comedy. How do you think humor informs your work? Do you think feminism could use a dose of …. gasp, humor?

Humour is key, because I’m piously committed to TOTAL REVOLUTION. I’m not just writing and performing about mental illness, abortion, feminism, socialism, LGBT equality, intersectionality, poverty, welfare because I like the sound of my own voice – mainly because my own voice is horrible: I sound like a rasping goose. I properly want to change people’s minds. And if you communicate with anger, 90% of what people hear is the anger. They’re not listening to what you’re actually saying. They’ll just start arguing back at you. And that is exactly what you can see happening with so much online activism. 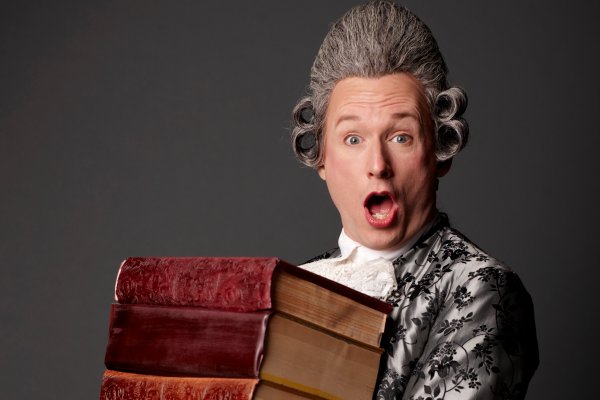 Quiz: Can You Figure Out the Meaning of Centuries-Old Slang?
Next Up: Editor's Pick