Watch How Word of Ebola Exploded in America

As Ebola has taken more lives and crept into more countries, the virus has come to dominate both news headlines and social media conversation. On Twitter, a whopping 10.5 million tweets mentioning the word “Ebola” were sent between Sept. 16 and Oct. 6 from 170 countries around the world. The map below, based on data TIME obtained exclusively from Twitter, shows how the conversation blew up in early October.

The country where Ebola dominates conversation most is Liberia, where the virus has already claimed more than 2,000 lives. In terms of sheer volume, though, most Ebola tweets are sent from the United States. Global conversation about the disease exploded after a Liberian man was diagnosed with the disease at a Dallas hospital on Sept. 30. On the night of Oct. 1, Twitter users were firing off missives about Ebola at the rate of more than 6,000 per minute, up from about 100 per minute before Sept. 30. Check out the heat map of Ebola tweets below to see how quickly talk of the virus spread following its arrival in the U.S.

Here’s a breakdown of the tweets per minute about Ebola over the last several weeks:

Research scientists who study the way we communicate on social networks borrow much of the terminology that’s used by health officials who are trying to control an epidemic. Internet users who pick up misinformation and false rumors are known as the “infected,” and they can infect others with every errant tweet or Facebook post. Much of what has been posted on social media about Ebola has been helpful—the Centers for Disease Control and Prevention’s illustrated tweet explaining how the virus spreads has been retweeted more than 4,000 times—but there have also been bogus rumors about Ebola reaching Idaho and an unwarranted panic after a passenger became sick on a flight in Newark, N.J. 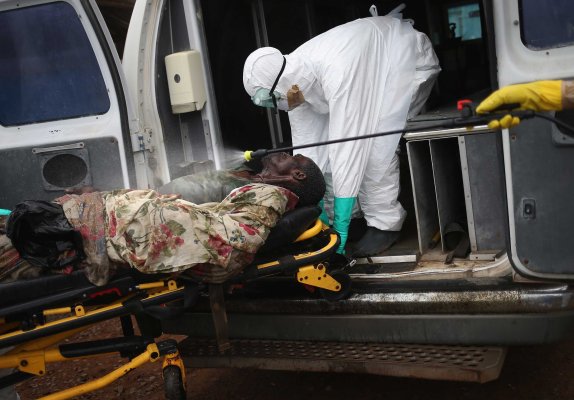 Liberia Burns its Bodies as Ebola Fears Run Rampant
Next Up: Editor's Pick