Preparing for the Apocalypse Is Turning Into a Huge Business

A hazmat team member arrives to clean a unit at the Ivy Apartments, where the confirmed Ebola virus patient was staying, on Oct. 3, 2014 in Dallas, Texas.
Joe Raedle—Getty Images
By Dan Kedmey

Since the first case of the Ebola virus was confirmed in Dallas, Rick Pedley noticed an unusual blip in sales at his online store, PK Safety. His regular customers, most of whom work in hazardous environments like construction sites or claustrophobic drainage pipes, bought protective gear at a rate of about 150 orders per day. That gear included gloves, hard hats and the occasional hazmat suit. Now there are plenty of newcomers, shoppers who evidently fear their communities might become hazardous. Orders have doubled.

That didn’t surprise Pedley, who has been selling safety gear for more than three decades. He’s witnessed a number of booms and busts fueled by fear. If anything the spike was modest compared with the 2002 SARS crisis, when a surge of orders cleared out every last dust mask from his warehouses. The H1N1 scare in 2009 put a similar strain on inventories. What set this week apart was the nature of the items flying off of the shelves.

Stock ran short on highly specialized body suits. Not the papery white ones worn by factory workers in sterile environments, but the yellow ones that look like rubber dish-gloves because they’ve been reinforced with polyethelene fibers. These tear-resistant suits range in price from $77 to over $1,000. They’ve been heat-sealed at the seams and advertised as an impermeable barrier for 280 chemical threats, including agents used in biological warfare.

Some customers were discriminating enough to look for them. “Really people are thinking in terms of stuff that’s more robust,” says Pedley, who also noted an uptick in sales of respirators that form a suction seal around the face. “It seems like they’ve read stuff online and they have in mind what they want to get,” Pedley says. ”In fact, it’s kind of a pain. You run out of things and people get kind of anxious. It’s not your normal business.”

Nonetheless, as a business, do-it-yourself pandemic preparedness thrives on the 24-hour news cycle. One day after news broke of a case in Dallas, CNBC reported that sales of one type of full-body protective suit climbed by 131,000 percent on Amazon. Gas masks and Ebola survival guides shot up the rankings as well. Manufacturers of “pandemic kits” have reported boomlets in demand. “Our business is so tied into bad news,” says John Caine, new business development manager at QuakeKare, “whether it’s man made or natural disasters, it goes through the roof.” QuakeKare sells roughly $8 million a year in disaster preparedness supplies from its headquarters in St. Louis, Missouri, according to Caine.

The size of the wider market for emergency preparedness is harder to define. There are the leading companies that sell pre-packaged kits to the tune of several million a year, chiefly QuakeKare, Mayday Industries and Guardian Survival. Then there are the upstarts, like the 24-year-old founder of AXP (short for Anti-Extinction Products), Kylie Holm, who has rapidly expanded her product line from preparedness kits for snowmobile accidents to preparedness kits for everything from rugged terrain to hurricanes. These companies tend to sell products across various types of disasters. A few tweaks to the flu kit can turn it into an all-purpose pandemic kit.

The hottest selling kits these days are not the same as those donned by health care workers in the worst hit areas. QuakeKare’s $34.95 “deluxe” kit is a one-gallon ziploc bag stuffed with safety goggles, a face mask, 5 millimeter thick gloves, disinfectant wipes, biohazard bags and a hooded bodysuit from DuPont. Its elastic cuffs snap tight around the wearer’s wrists and ankles, but it is not air-tight, like the suits used by the CDC. “This is just my opinion as a sales manager,” says Caine “but as the story becomes bigger in the media, more people will be thinking it’s better to be safe than sorry.”

Whether these suits offer real protection or a false sense of security depends, in part, on the user and the environment. They’re not exactly user friendly. Pedley has tried one on himself and likened it to wearing a garbage bag: hot and sweaty. They can’t be shrugged off at the front door. They have to be rolled down the legs with care and disinfected. And even if they’re used according to instructions, the question remains of how to know when to don the gear.

Still, the suits and associated apparel have a unique appeal to a community of survivalists who call themselves “preparers” or “preppers” for short, who trade advice through online forums such as the American Preppers Network. Not all preppers believe the end is nigh. Their most persuasive spokespersons say there’s no reason to panic, but believe in preparation—including protective body suits. “Panic may very well ensue,” writes Organic Prepper, one popular blogger in the prepper community, “but it’s an indulgence you can’t afford when you have a limited window to acquire the things you may need.”

The chief producer of these protective suits, DuPont, has little to say about the D-I-Y market for its products. DuPont’s spokesperson says the firm remains committed to equipping health professionals in the hardest hit areas of west Africa. The company has tripled its production of protective gear to meet the demand from the World Health Organization and Médecins Sans Frontières, among other coordinating relief organizations. 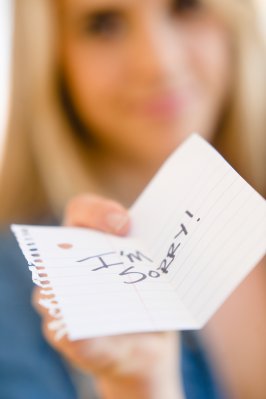 5 Rules For Apologizing Like a Grownup
Next Up: Editor's Pick