The National Republican Congressional Committee ad opens with grainy footage of black flags and fighters from the Islamic State of Iraq and Greater Syria (ISIS) holding rifles on military vehicles. “Evil forces around the world want to harm Americans every day,” an ominous voiceover states. “Their entry into our country? Through Arizona’s backyard.” The spot goes on to recount how Rep. Ann Kirkpatrick (D-AZ), locked in a close re-election fight with Arizona House Speaker Andy Tobin, has voted against border security legislation, suggesting that she “leaves Arizona vulnerable.”

The claim is clear: The same terrorists targeted by U.S. bombers for destruction in Syria and Iraq are coming to the U.S. to attack the homeland through the Mexican border. Yet federal law enforcement officials have repeatedly stated that there is no active plot against the U.S. from ISIS fighters in Iraq and Syria, and no intelligence to suggest incursions on the Southern border.

To make the claim, the ad relies on a Sept. 10 writeup of a congressional hearing by the conservative Washington Free Beacon in which a Department of Homeland Security official was understood as telling lawmakers that ISIS “supporters are known to be plotting ways to infiltrate the United States through the border.”

But a review of the testimony by DHS Under Secretary for Intelligence and Analysis Francis Taylor tells another story. Instead, he said, “there have been Twitter, social media exchanges among [ISIS] adherents across the globe speaking about that as a possibility.” But that is a far cry from a direct threat, and light years away from a direct plot against the homeland.

Other national security officials have since offered more detail refuting the claim. “We see no specific intelligence or evidence to suggest at present that [ISIS] is attempting to infiltrate this country though our southern border,” Homeland Security Secretary Jeh Johnson told the House Homeland Security Committee a week after Taylor’s testimony. Matt Olsen, the outgoing director of the National Counterterrorism Center told lawmakers at the same hearing, “There have been a very small number of sympathizers with [ISIS] who have posted messages on social media about this, but we’ve seen nothing to indicate that there is any sort of operational effort or plot to infiltrate or move operatives from [ISIS] into the United States through the southern border.”

When asked about the sourcing for the ad’s claim, a spokesman for the NRCC did not back down. “ISIS presents an imminent and dangerous threat to the United States,” says Daniel Scarpinato, a NRCC spokesperson. “Anyone who doesn’t believe that having a porous border made of chicken wire is leaving our country at risk, should go explain that to people in Arizona who actually have to live with this problem and are upset that politicians like Ann Kirkpatrick are ignoring it.”

By juicing the threat of ISIS, Republicans are hoping to take advantage of global volatility and the understandable fear surrounding it for their own electoral purposes. ISIS has been used as campaign fodder since at least the summer, as the terrorist group took control of major cities in Iraq and started beheading Westerners.

In August, GOP New Mexico Senate candidate Allen Weh, a Marine veteran, attracted criticism when his campaign used a screenshot of the knife-wielding man who killed American journalist James Foley in an ad. Over the past few months, New Hampshire Republican Senate candidate Scott Brown has knocked Senator Jeanne Shaheen (D-N.H.) repeatedly over the spread of ISIS, using the image of a fighter carrying a black ISIS flag in one ad and President Obama’s “we don’t have a strategy yet” quote in another. Senate Majority Leader Mitch McConnell also featured that quote in an ad, saying he was the right choice in these “serious times.” 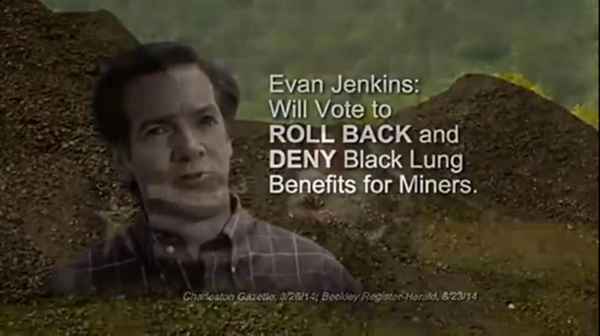 Here Are 5 of The Most Dishonest Political Ads of 2014
Next Up: Editor's Pick