ISIS Has Entered the Key Syrian Border Town of Kobani

The Islamic State of Iraq and Greater Syria (ISIS) entered Kobani on the Syria-Turkey border Monday, after intense street fighting with Kurdish forces trying to defend the Syrian town, the BBC reports.

The Sunni militant extremists raised their black flags on several buildings, after pushing into three neighborhoods in the east of the city, also known as Ayn al-Arab.

Kobani has been besieged for three weeks, and more than 160,000 civilians have fled to the Turkish border.

ISIS fighters pushed through the defenses of the Syrian-Kurdish troops with tanks and artillery, killing many in street battles. The militants now have control of Mistenur, a key hill above the town, the BBC says.

“They have surrounded us almost from every side with their tanks. They have been shelling the city with heavy weapons. Kurdish fighters are resisting as much as they can with the limited weapons they have,” Asya Abdullah, a senior Kurdish politician and co-leader of the Democratic Union Party, told the BBC.

If the ISIS militants take control of Kobani, they will have a huge strategic corridor along the Turkish border, linking with the terrorist group’s positions in Aleppo to the west and Raqqa to the east.

Heavy clashes between ISIS fighters and Kurdish defenders raged all of Monday and over the weekend but despite the help of U.S.-led air strikes, the militants managed to close in on Kobani.

Turkish Prime Minister Ahmet Davutoglu says he will do everything he can to save the people living in the border town.

“We will do everything possible to help the people of Kobani because they are our brothers and sisters. We don’t see them as Kurds or Turkmen or Arabs.”

For the past week, tanks belonging to the Turkish Armed Forces have been positioned on the hills close to Kobani in order to reinforce the border.

But many Turkish Kurds and refugees have slammed Ankara for not doing enough to defeat ISIS, which is now knocking on Turkey’s front door. 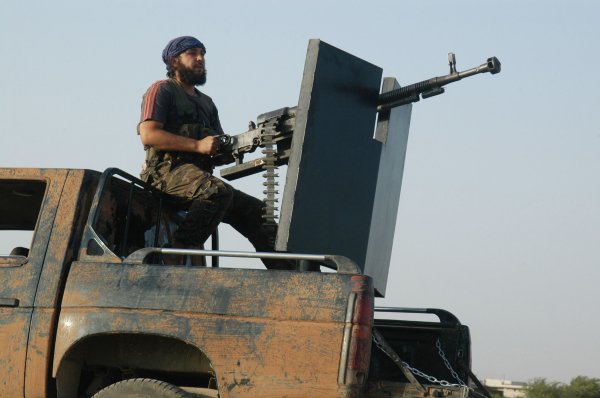 The Challenges of Turning Syria's Rebels Into a Fighting Force
Next Up: Editor's Pick