Dancing With the Stars Watch: Tears, Cheers and Memorable Years

Welcome back to Dancing With the Stars, but brace yourself, because this is the week that the show reaches down into your soul and squeezes out the tears by setting the stars’ most painful, challenging and difficult moments to dance and then judging them on it. But this year, it’s not just the judges who will be weighing in on the stars’ fleet-footed interpretations of their most memorable years — America will also be assessing the routines. Yes, America is the guest judge tonight. Let’s hope they use their powers for good and don’t let it go to their heads.

Janel Parrish and Val Chmerkovskiy: Janel dedicated her routine to her vocal coach and mentor BJ, who inspired Janel to move to Los Angeles and pursue her dreams. While Janel was in L.A., BJ got sick and died before Janel could say good-bye. It’s her biggest regret. She wanted to pay homage to her “second grandma” by slow-dancing a rumba in a glittery toga to a romantic version of Whitney Houston’s “How Will I Know?” Grandma BJ is probably very touched. Janel and Val already know they are safe this week, and will probably be safe next week with a score of 36/40.

Jonathan Bennett and Allison Holker: Jonathan chose not to toast the year that he was cast in Mean Girls, but instead to commemorate the year he lost both his parents. Yes, he is an orphan, but instead of wallowing in it and angling for some well-deserved sympathy votes, he admirably decided to samba to an unexpected mash-up of “Jingle Bell Rock” and Kelis’ “Milkshake” instead. The judges dared to pick on his technique, though, with even supposedly nice judge Carrie Ann Inaba almost calling him a one-note wonder and Julianne Hough calling him “Flat Stanley.” Luckily they are already safe this week and may be able to redeem themselves next week. 24/40.

Betsey Johnson and Tony Dovolani: The designer’s most memorable year was 1975 when her daughter Lulu was born, and she decided to start her own fashion company. To kick off her routine, Lulu escorted her mother onto the dance floor, kissed her on the cheek and then left her in Tony’s hands for a meandering jive. Lest you forget that Betsey is not your average grandma, the routine included a handstand and dance-pants-revealing slide. In Julianne’s words, “Wow, you got your knees up really high!” 29/40.

Bethany Mota and Derek Hough: Bethany chose to mark the year 2009, when she started “to YouTube.” She didn’t start her channel just “to create content,” but because she was being bullied, even by people she considered friends. To interpret the pain of bullying in dance, she and Derek danced a rumba while Colbie Caillat performed her song “Try” live. The routine and the message brought Julianne to tears, but even through the tears she had to nitpick at her brother for the lack of true rumba content. After their perfect score last week, there was little doubt that they would be safe this week too. 33/40.

Michael Waltrip and Emma Slater: The NASCAR driver’s most memorable year was 2001, when he won the Daytona 500 and his friend Dale Earnhardt died. To mark the moment, he did a quick step to a song that reminded him of Dale — Delbert McClinton’s “Givin’ It Up for Your Love,” which they would sing on the back of a boat. The routine was shaky, and Michael was already in jeopardy. 25/40.

Lea Thompson and Artem Chigvintsev: Lea chose to commemorate the year that her father died, and when he had just one week to live, they celebrated all the holidays with him one last time. The contemporary routine was set to the very on-point song “Dance With My Father Again.” It was well executed, fluid and really emotional. Lea had no choice but to start ugly crying on camera the second the song was over. The judges loved the routine, but America ruined the perfect score by doling out a 9. 39/40

Antonio Sabato Jr. and Cheryl Burke: Antonio decided to commemorate the year that he came to America and was cast in Janet Jackson’s “Love Will Never Do (Without You)” and kick-started his career. Obviously he had to set his shirtless (but with suspenders!) samba to the Jackson song. Bruno Tonioli dubbed it an audition for Magic Mike 2½, while Julianne pointed out that he needs to work on filling the space around him. 29/40.

Tommy Chong and Peta Murgatroyd: In 2003, Tommy went to jail for transporting “drug paraphernalia” across state lines. He paid homage to that year by dancing a jive to Elvis Presley’s “Jailhouse Rock.” The judges didn’t think it was his best routine, but admitted that they all loved him and the energy that he brought to the show. He’s in jeopardy this week, and his score may not be enough to carry him through. 28/40.

Sadie Robertson and Mark Ballas: 17-year-old Sadie’s most memorable year was not when she got her braces off or made honor roll, but the year that Duck Dynasty became a national phenomenon. Sadie also mentioned how her grandpa made some remarks that upset people, and they almost didn’t want to do the show anymore, but then they did. The sassy samba to Pharrell Williams’ “Hunter” involved Sadie dressed as a duck dancing with Mark, who was dressed as her dad — complete with fake beard and head-to-toe camo gear while her real dad and uncles sat in rocking chairs on a fake porch honking duck calls. Only on Dancing With the Stars, people. 37/40.

Alfonso Ribeiro and Witney Carson: Alfonso’s most memorable years were the ones he spent on the set of The Fresh Prince of Bel-Air, obviously. To celebrate the moment and to take us all on a trip down memory lane, Alfonso finally busted out the Carlton, which he had to teach his pro partner, who is too young to know the show or the dance. The audience went wild and the judges loved it too. Julianne appreciated that he made everyone wait for it, “like dating.” While, Carrie Ann just said one word, “finally.” 40/40.

Going Home: Tommy Chong, Michael Waltrip and Betsey Johnson were all in jeopardy after the scores from last week. It was quickly announced that Tommy was safe, while Betsey and Michael were forced to wait to hear their fate. Finally, Betsey was sent packing. It’s sad to see the limber lady sent home, but there was no way the judges could let Michael leave after his interpretative dance to Dale Earnhardt. They have souls.

Best Reason to Come Back Next Week: It’s the switch-up when all the stars have to go slightly outside their comfort zones by dancing with other pros. 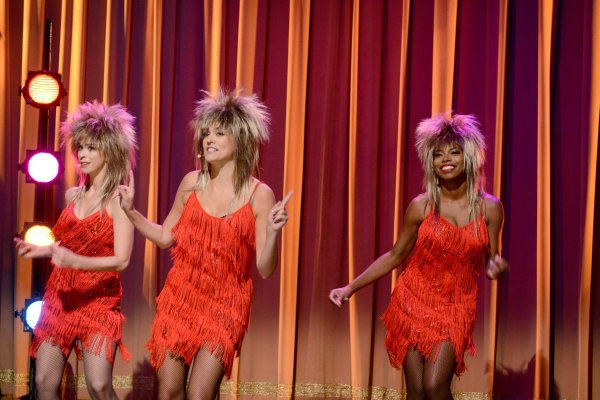