Review: Weezer Insists That Everything Will Be Alright in the End, and It Is

It’s generally a bad sign when a band starts out its new album campaign by apologizing, particularly when that band spent the better half of the 2000s in unfettered self-indulgent decline. Yet that’s exactly what Rivers Cuomo does on the lead single of Weezer’s ninth album Everything Will Be Alright in the End, renouncing his past few years of radio rumspringa, B.o.B appearances and other cross-promotional musical detritus: “Sorry guys, I didn’t realize I needed you so much / I thought I’d get a new audience / I forgot that disco sucks … Maybe I should play lead guitar and Pat should play the drums.”

There’s something more than a little rich about this. That song, “Back to the Shack” is mostly the same song as “Memories,” from new-audience-era Hurley, and cowriter Jacob Kasher is signed with super-producer Dr. Luke. More to the point, a song that from the start pleads with the Weezer Cruise demographic to return with their fandom and their dollars doesn’t have much room to go on about obscurity and feelings and how you “can’t put that on sale.” But there are just enough flashes of self-awareness – like that conspicuously pricey sheen of power-pop gloss, and a just-emphasized-enough “turn up” pun – to suggest it’s maybe part joke. Maybe Weezer’s in on it, for the first time this decade.

But if “Back to the Shack” doesn’t quite work as a lead single, it does work as a promise: that Everything Will Be Alright in the End will be Weezer returning to “the place where the lightning struck.” That’s back to 1994, to Blue Album collaborator Ric Ocasek (The Cars, Nada Surf, Hole) and his spit-shine production, and back to, as drummer Patrick Wilson enthused, “the tight structure of Blue Album with a little more abandon like Pinkerton.”

In other words, the album’s a deliberate, slightly abashed retcon, an album from a world where nothing since 2000 happened and the albums that did happen were far more palatable. As usual, the order of the day is dad, band and girl problems, expressed via dorky off-kilter Cuomo conceits – Patrick Henry, Cleopatra and Stephen Hawking – alongside meat-and-potatoes power-pop. The character-study-if-you’re-nice shtick of Pinkerton reappears, too, in slightly diluted form: the right-outta-alt-lit “Lonely Girl” (which interpolates the Blue Album’s much-loved closer “Only in Dreams”) and “Go Away,” with the welcome addition of Best Coast’s Bethany Cosentino calling Cuomo’s persona on his crap. Cosentino’s presence on Everything Will Be Alright is one of the few holdovers from 2010-era Weezer — specifically the band’s habit of pairing Cuomo with a series of decreasingly simpatico duet partners, from Paramore’s Hayley Williams to Sara Bareilles to Lil Wayne’s rap-rock guy Kevin Rudolf. Luckily, Best Coast’s self-loathing power pop is close enough to Weezer’s own self-loathing power pop that it seems far more natural.

The Blue Album ranks-closing is so strong, in fact, that it makes everything that’s off-brand come off organic: the aforementioned duets, The Darkness co-writes and the falsetto that comes with them, the radio-rock whistling. It’s an easy shot that Weezer lands near-perfectly. “Eulogy for a Rock Band,” much like U2’s recent “The Miracle (of Joey Ramone),” is an earnest remembrance both of rock in general and of one unnamed Great Act — but much unlike U2’s mandatory moment of worship, it serves as a touching requiem because it doesn’t set its stakes too high. They reserve that for the album’s closer – a litmus test for listeners, either the album’s highlight or nadir: a three-part, largely instrumental suite comprising multiple showy solos, every sugary pop-punk harmony in the book, climaxes upon climaxes, a children’s choir, a title drop, and the title of “The Futurescope Trilogy.”

It’s not much of a litmus test, though. If you’re sticking around with Weezer at all in 2014, you’re likely the sort of person who’s got the gene that makes you start, somewhere around the second half, grinning happily. It’s the same gene that allows you to shrug off the idea of a self-consciously riffy album-closing “futurescope trilogy” as Rivers just being Rivers. It might be Everything Will Be Alright in the End’s greatest, most improbable accomplishment: making that prospect sound not awful, but maybe even pretty good. 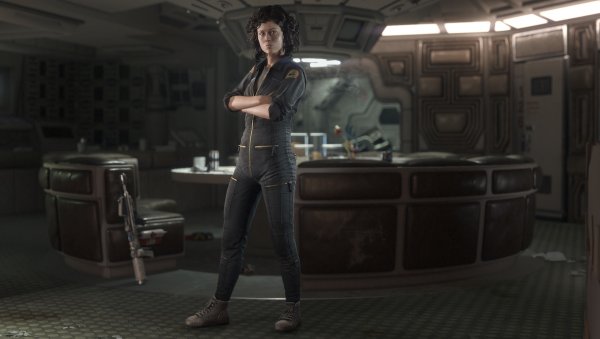 Sigourney Weaver: Why I Signed On for Alien: Isolation
Next Up: Editor's Pick